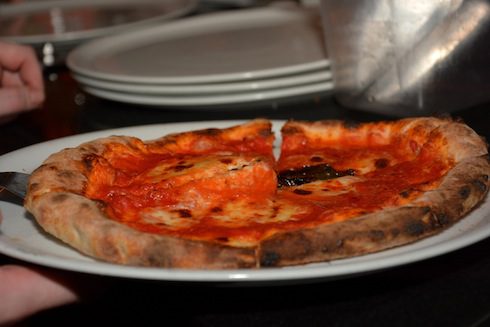 New York has its thin-crust. Chicago has its deep-dish. Now Delray Beach has authentic Italian pizza, thanks to Mastino Wood-Fire Kitchen and Bar (25 N.E. Second Ave.), which just debuted in the Pineapple Grove district of Delray.

At the center of the restaurant is a steel handcrafted wood-burning oven that was imported from Naples, Italy. It bakes only the highest-quality Napolean-style pies – so authentic, in fact, that Chef Salvatore Campanile received certification from the Associazione Verace Pizza Napoletana “True Neapolitan Pizza Association” to create them.

The casual-style Italian eatery is part of Society 8 Hospitality Group, the same people who brought SoLita to neighborhood in 2011. In fact, the new concept will serve as a casual compliment to the more exclusive SoLita. It has taken over the restaurant’s former main dining room and the two establishments will share the adjoining space and outdoor patio-area. The new space has been transformed to give off an industrial feel. Black-and-white photographs of Italian-style street food hang from its traditional-style red brick walls and comfortable black leather couches create a relaxed atmosphere.

Soon Mastino will open up its kitchen to foodies interested in learning how to make their own pies. The Artisan Pizza Academy which will offer three culinary classes: The Art of Mozzarella Class, Introduction to Basic Pizza Making Class and a Five-Day Professional Neapolitan Pizza Certification Course. Those wanting to attend should call 561/922-0900 for dates and pricing.

Mastino gets its name from the Italian bullmastiff who, according to old folklore, guarded the kitchen of the chef who created the Neapolitan-style margherita pizza for Queen Margherita.

Masino will be open for lunch Friday through Sunday from 11 a.m. to 5 p.m and will serve dinner daily from 5-11 p.m.