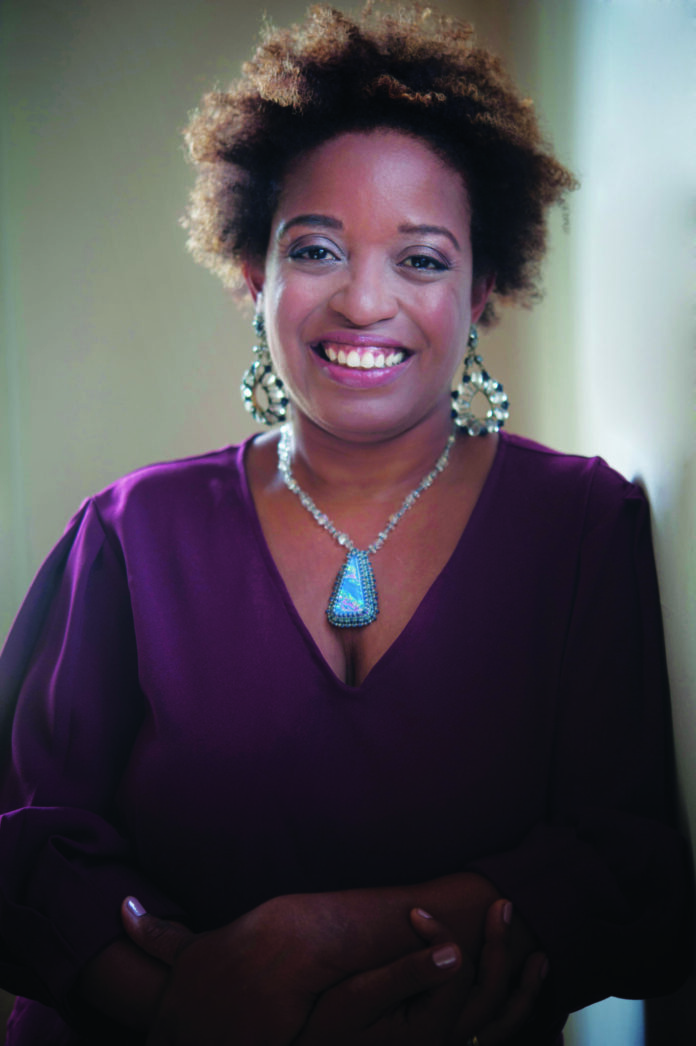 Leslie Gray Streeter, the Boca Interview in our July/August issue, discusses her debut memoir Black Widow, about the surreal year after she became a widow in her ‘40s—a period that included grieving her late husband Scott while attempting to finalize an adoption of their child, Brooks.

I was able to chat with Leslie in mid-March, just days before the world shut down. Here is more of our conversation, sitting too close for corona comfort in the tiny Murder on the Beach bookstore at the Delray Beach Public Library.

Were there parts of your grief that were too private even to share in a tell-all like this?

There were some things I wrote that were edited out and I put back in. Editors go, “It’s your book, but here’s suggestions.” It’s my thing, so everything seems super-important to me. So I probably shared almost everything. Specific things I didn’t share were the specifics of Brooks’ birth parents.

Do you hope Brooks will read Black Widow one day?

I do. And I thought of him so much in those moments. I didn’t want to be that woman who just said verbal vomit about things that will hurt my child when he’s an adult and he reads it. Because that doesn’t serve anybody.

Has losing Scott affected your beliefs about the afterlife?

No. When my dad died, I was pissed at God, and super mad. I started going back to church; I don’t go as regularly as I used to. My mother and Brooks belong to the church; I just go with them. It’s not the thing that it was. My belief in the afterlife is a lot more liberal than it used to be, about who gets to go. Good people get to go, and slave owners who decided to talk to Jesus when they were dying? Screw those people. I could be wrong.

Have you had any signs from him?

Yes. Our legal marriage was at the Delray Courthouse, because he needed surgery, and I needed to put him on my insurance, and it was supposed to be right after the wedding. So we got married two weeks before our wedding. It was just a legal transaction. A couple songs that reminded me of him just came on my Spotify as I was driving past the courthouse tonight.

You write about the challenges of dating again. How’s that going, all these years later?

It’s stupid. Dating in your 40s is incredibly stupid. Dating as a widowed person is hilarious. I deleted every one of my apps. I feel like if it happens, it’ll just happen. And in this process, I’ll meet interesting people—it may not be the one, but I’ll be in the company of not idiotic people who are trying to scam you.

You’ve had that happen?

I had a guy who, in his picture, said he was widowed. And he was originally from someplace in Eastern Europe, and he was living in Broward County. And I talked to this guy, and said, “how long have you been widowed?” He said, “it was a while ago.” Then he says, “do you rent or own?” I said, “why in the world would you ever need to know that?” He goes, “that’s just a thing I ask.” I go, delete delete delete.

How did you carve out the time to write this book with a full-time newspaper job?

I took a week off and sat by the pool at the Four Seasons and wrote. I wrote at 4 o’clock in the morning, at 10 o’clock at night, on airplanes and in hotel rooms. I finished the first draft sitting at my sister’s kitchen table during Hurricane Irma, at 4 in the morning. I would get up at 3 or 4 and write the book, and at 6, I’d turn on my work email and write Post stuff.

Now that you’re a published book author, and you’ve done the work, would you do it again; is there another book in you, whether a sequel or a completely different topic?

Oh yeah, of course. I’ve been off for almost two weeks now, and I thought I’d do all this writing, but it’s been so crazy. I wrote an outline, and I’ve written a page of something, so we’ll see how it goes.