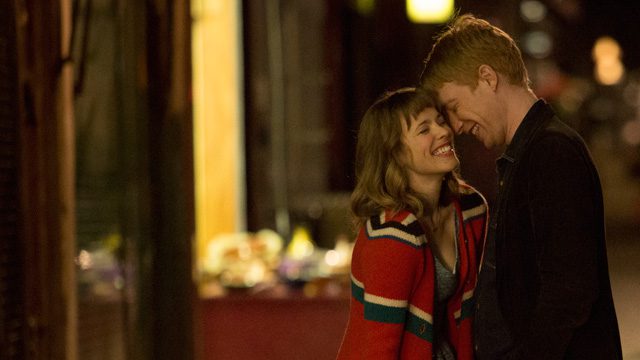 Time travel is an unfussy thing in Richard Curtis’ new romantic comedy, “About Time,” which opens in theaters today. There are no contraptions, no calendars with which to conjure a time and place, no broken fuses that would leave its travelers stranded with the dinosaurs or inescapably lodged in Nazi Germany.

This time, it’s foolproof, matter-of-fact and ultimately taken for granted: The men in a particular upper-middle-class British home just happen to be able to travel back in time by entering an enclosed space, balling their hands into fists and thinking about that time. They can return to correct a minor detail or change their own histories, traveling back to the present whenever they want, with their families none the wiser. Tim (Domhnall Gleeson), the film’s shy, ginger-haired protagonist, learns this ritual from his father (Bill Nighy) on his 21st birthday, like a familial rite of passage.

The ease and simplicity with which this surreal information is delivered and promptly accepted speaks to the breezy talents of Curtis, the writer and director of “Love, Actually,” who shrewdly keeps his high concept secondary to the humanity of his characters. There are long stretches of “About Time” in which the time-travel device is not used, and the film is no less engaging; he just lets the natural charm of his writing and the performances spill forth. This is a movie above all about human relationships – about coming of age from a milquetoast boy into a man with a home, wife and children, and the challenges they bring. Curtis uses the fantastic to arrive at the universal.

But initially, Tim desires one thing from his new ability: He wants to use it meet girls, and finally lose his virginity. After moving to London to pursue a law degree, he cute-meets Mary (Rachel McAdams, who is so radiant she’s practically her own lighting scheme) in a darkened blind-dating experiment, hits it off with her, gets her digits, then promptly loses them in the fabric of time when he decides to use his gift to help out his playwright roommate. By going back to a time slightly before his meeting with Mary, he suddenly realizes the meeting with Mary never happened, so he vows to track her down in the big city using whatever information he can remember from their meeting.

This is where the film dabbles in quantum theory and alternative universes, inasmuch as a mass-market blockbuster comedy can dabble in the purview of Stephen Hawking. For Tim, time is fungible, an endless cosmos of permutations that only he can explore, playing God and tackling the unintended consequences of doing so. He employs his gift most frequently as a corrective – whiting out life’s mistakes and painting over them in brighter colors, effectively avoiding genuine tragedy by living in an ever-shifting bubble of his own creation. This fantasy is unhealthy, of course, which is Curtis’ overarching point: We need to confront, not avoid.

Lest it seem like I’m overimpressed with “About Time,” it’s worth noting that neat, psychologically grounded observations like the one above hardly take an agile cinephile’s mind to deduce. Curtis is the kind of director that leaves nothing to ambiguity, spelling everything out and assuming no one in his audience has more than a sixth-grade education. And, novel as the movie’s concept may seem, it has superior antecedents in film history, namely “Groundhog Day” (the ability to learn, adjust and change time by risk and repetition) and “Eternal Sunshine of the Spotless Mind” (the way two people always seem to connect, no matter how life’s circumstances bring them apart).

There’s also the schmaltziness that unfortunately underwrites the natural warmth of his situations. An unabashed manipulator, Curtis is never above using musical cues to play us like fiddles. And yet, even I consciously surrendered myself to the spell his film cast, crying at an especially emotional moment that telegraphs itself as an Especially Emotional Moment. Some of Curtis’ methods may be tacky, but when it works, it works.