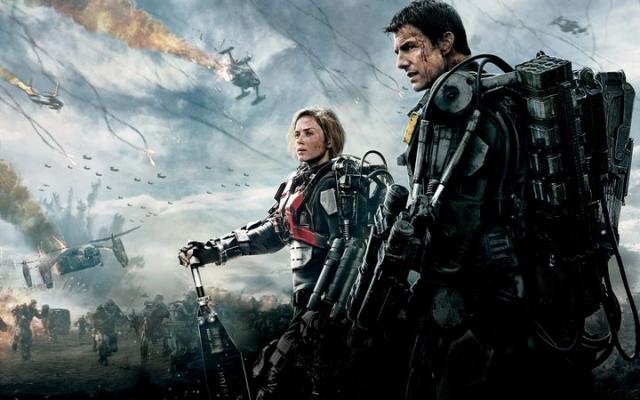 Once again, the end of the world is upon us, and once again, only Tom Cruise can save us.

“Edge of Tomorrow,” which opens everywhere Friday, wastes no time hurtling us into the apocalypse, to the expense of its own coherence. The movie opens with snippets of news programs from around the world, which vaguely allude to an alien invasion and mass destruction across Europe and Africa, heading toward our fair country. We see graphics of world maps in which swaths of red envelop huge portions like a plague, and, eventually, Cruise’s telegenic civilian officer, a government stooge known simply as “Cage,” begins to appear on shows like “The Lead with Jake Tapper” and “Out Front with Erin Burnett,” pushing the propaganda that everything will be fine; just wait until our next surge. (For the sake of realism, I was looking for news about the Kardashians or box-office figures on the CNN ticker, but I didn’t notice any).

It’s a jumbled and apoplectic way to open a film, with suggestive clatter substituting for clarity. Its next few scenes are no less puzzling. General Brigham (Brendan Gleeson), the man leading the charge against the extraterrestrials—slithering hydras known as “mimics”—calls Cage into his office and tells him he’s going to send him into combat immediately, despite the fact that he’s a P.R. flak with no experience. Cage tries everything to get out of it—pulling rank and blackmail among them—but soon enough he’s on a military base, where he’s physically manhandled and verbally maligned by the troops, strapped into a robotic suit that acts as his weaponry and his protection, and sent onto the battlefield the very next day.

Everybody else in his regiment, including its master sergeant, a sadistic self-parody played by Bill Paxton, seems peculiarly focused on waiting for Cage to die in combat. As nonsensical as it to send him onto the field on the first place—is General Brigham settling a grudge with a death sentence?—the troops’ response makes even less sense. It’s hard to believe every person he speaks to would treat him like dirt, that none of them would actually try to help a fellow fighter being thrust into combat for the first time, but I suppose that says a lot about what the movie’s screenwriters feel about our soldiers: They’re all one-dimensional roughnecks with bloodlust.

I’m not spoiling anything to reveal that Cage dies on the battlefield, as quickly as you expect him to, in a terrifyingly intense storming of a beach. But wait, what’s this—he’s waking up again on the military base as if nothing happened. Was it all a dream? No—he’s reliving the day again. And when he meets his maker the next day, he’ll relive it again. “Edge of Tomorrow” is the “Groundhog Day” of war movies, except that instead of the pop harmonies of Sonny & Cher, Cage wakes up every morning to a soldier’s brusque order of “on your feet, maggot!”

There’s a reason Cage, and not the other soldiers, have the blessing/curse of endlessly re-experiencing this traumatic day, but it would take the rest of this review explaining it, and really, who cares? Suffice it to say that the movie gets a lot more fun, witty and electrifying when it fully gives in to its premise, even if it’s predicated on nonsense the screenwriters adjust whenever they write themselves into black holes. Cage gets to experience different permutations of life and death, growing more fearless with every retake and becoming something of a supersoldier in the process. Along the way, he notices the requisite pretty soldier, Rita, a special-forces badass played by Emily Blunt who, it just so happens, used to suffer the same burden currently facing Cage.

In Rita and her particle-physicist colleague Skinner (Jonas Armstrong), Cage finds helpers who understand his story, though each day, every time he dies, he has start from zero, re-explaining everything to them while hoping to get just a little bit further in saving themselves and the world. It’s a lot like a video game, one of those frustrating adventure stories in which no matter how far you get, once your lives expire, it resets to the beginning. The movie redefines the phrase “endless war.”

Credit director Doug Liman, a former indie auteur who has become an accomplished director of Hollywood actioners, for riveting us to this insane concept. Its chronologically complex editing rhythms take on the feel of an experimental film, and the movie is so well executed on a technical level that we accept its incredulity. Just as vitally, Cruise and Blunt make for a compelling romantic pair—oil and water that, given no choice but to mix for a seeming eternity, eventually stick well to each other.

In this movie’s world, Armageddon comes across as fairly banal and dramatically under-thought. But getting somebody to like you—or at least the scared, pompous blowhard you were when she met you? That’s the real challenge, even when you have all the time in the world.