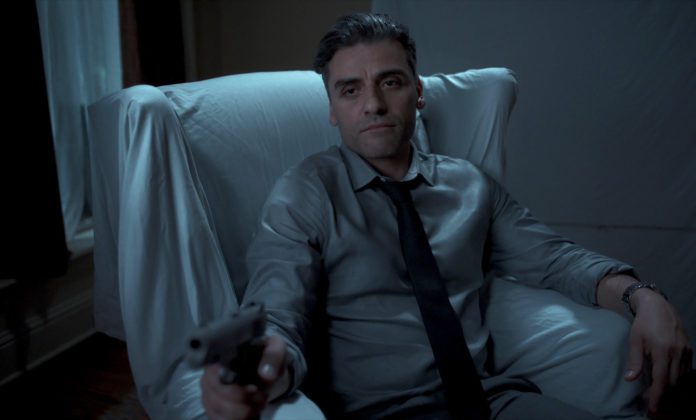 But of all its abandoned flirtations with genre conventions, it’s the final one that has the most impact. “The Card Counter” is set in the present day, but it is haunted by the shameful legacy of Abu Ghraib and the Iraq War, even if the conflict is only viewed through the distorted lens—a fish-eye lens, to be exact—of memory and slumber.

Oscar Isaac plays a former military interrogator (read: torturer), now operating under the alias “William Tell,” and who served more than eight years at Leavenworth prison for war crimes at Abu Ghraib. In his long years in the pen, he learned how to count cards, which has become his de facto vocation. Without a home to speak of, William traverses the nation, from casino to casino, where he deploys his card-counting knowledge to win just enough cash to keep him afloat to the next day, but not too much to warrant his expulsion from the tables.

William is less a flesh-and-blood man than a spectral energy gracing a casino’s presence, playing his hands with academic rigor, and moving onto the next job. His inner torment is only visible when his head hits the pillow, and PTSD nightmares offer a heightened peek into his time at Abu Ghraib, sequences Schrader ingeniously films in the uninterrupted, point-of-view format of a first-person shooter game.

This roving, insular life seems to be his destiny, until he happens upon a lecture, at a conference in a casino, by a familiar name: Major John Gordo (Willem Dafoe), who trained him in “enhanced interrogation techniques,” and who now works in the private sector, developing technologies for law enforcement. It’s here that William meets a conference attendee half his age, Cirk (Tye Sheridan), who shares a history, and hatred, for John Gordo. An unlikely bond is formed, with the directionless young man joining William on his endless casino run.

Oscar Isaac is no stranger to playing brooding loners. You can argue his entire career consists of variations on the theme, with “Inside Llewyn Davis” and “A Most Violent Year” springing most quickly to mind. But it’s Paul Schrader’s previous film, the magisterial “First Reformed,” that “The Card Counter” most obviously conjures.

William is very much like Ethan Hawke’s Ernst Toller, the cancer-riddled priest who loses his faith in the prior film. Both men are creatures of their routines, and who are disinclined toward change. Both detail their thoughts in hand-written journals, and both choose to live in muted, monastic environments closer to prisons than homes. The most telling thing about William Tell is that he transforms every cheap motel in which he stays into fashioned replicas of the jail cell where he learned to count cards, removing artwork from the walls, disconnecting the phone and clock and TV, and covering the furniture in institutional white sheets. His survival depends on deprivation.

Also as in “First Reformed,” there’s a woman who functions as his potential savior, in this case a terrific Tiffany Haddish as La Linda, a veteran gambling insider who agrees to be William’s financial backer if he’s willing to play for higher stakes. William does, for the benefit of Cirk, his unlikely kindred spirit. There’s even a romantic connection worth exploring between William and La Linda. William may be heading toward a redeemed life—call him second reformed—if only Schrader’s instinctual fatalism would stay out of the way.

Occasional voice-overs from William place us in his typically opaque headspace, offering precious insights into the reasons for the way he is. At one point, he says that he may be a person “suited to a life of incarceration,” a profound acknowledgment that he may be too damaged for society. It’s a trait that links him to another Schrader veteran: Travis Bickle, in his screenplay for “Taxi Driver.”

William Tell is neither hero nor villain but, like Travis, a victim of the society that created him. Dafoe’s John Gordo is a more obvious villain, but he’s more of a middle-management functionary, when the crimes this nation’s military committed were more systemic in nature. Videos of Donald Rumsfeld that flash briefly during one of William’s voice-overs get closer to the abject villainy “The Card Counter” exposes—the criminal decay at the very top. As Cirk puts it so astutely, and I’m paraphrasing, “it’s not a few rotten apples—it’s the barrel they came in.” As we’re just one day away from the 20th anniversary of 9-11, “The Card Counter” brutally reminds us that we must also never forget what we did in reaction.

“The Card Counter” is now playing at Cinemark Palace 20 and Regal Shadowood in Boca Raton, Cinemark Boynton Beach and other area theaters.