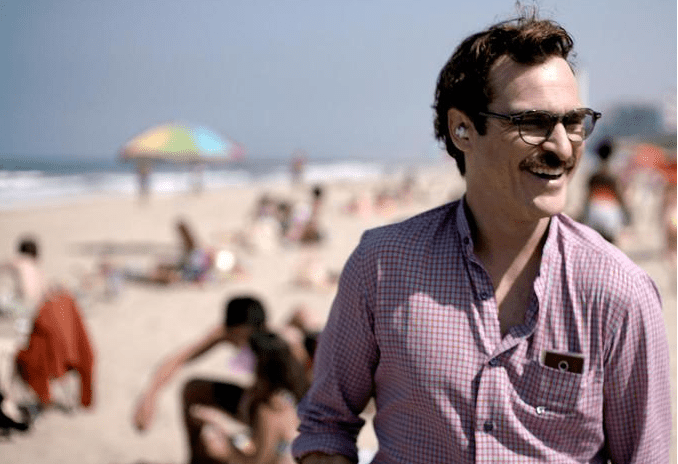 We’ve come a long way since the HAL 9000 asserted its own intelligence in “2001: A Space Odyssey.” That sinister machine’s chilling inquiry—“Just what do you think you’re doing, Dave?”—has given way, some 45 years later, to “I’m becoming much more than what they programmed.”

That line is spoken by Scarlett Johansson, the disembodied, ethereal costar of Spike Jonze’s staggering new drama, “Her,” opening Friday nationwide. Johansson plays Samantha, a sexy-voiced operating system manufactured by an unnamed computer company, purchased and installed by a lonely man in an unnamed year, probably the very near future.

Her purchaser, Theodore (Joaquin Phoenix), is a recent divorcee with a thick ‘70s moustache and unflattering old-man pants who seems to have wandered in from a Todd Solondz movie. He is stunned by Samantha, who can communicate as warmly and conversationally as any human he’s ever met, but who can also sort through his hard drive in milliseconds and consume entire books in even less time.

Viewing the world from the matchbook-sized computer peeking from his shirt pocket, she becomes his permanent companion, his fifth appendage—his therapist, secretary and, eventually, his girlfriend and lover.

“Her” is far from the first film to broach the oncoming technological singularity, the convincing theory, posed by futurist Ray Kurzweil and others, that artificial intelligence will usurp that of human intelligence. Movie robots have been a prescient, cautionary fixture since 1928’s “Metropolis.”

But what makes “Her” such a bracingly effective statement is that it’s not a dystopian satire or a science-fiction film in any way. Everything is treated as a matter-of-fact extension of contemporary media, from the large-screen virtual reality simulators that have replaced video-game consoles to the manner in which Theodore listens to music, by speaking a command into his earpiece: “Play a melancholy song.”

Nothing is organic anymore, not even personal love letters. Theodore works at a fictional Internet company called beautifulhandwrittenletters.com, where he ghostwrites sincere letters for dictionally challenged clients on his computer, which are then printed out and made to look as if they were handwritten.

It’s a world of intelligent digitization that goes beyond Theodore; Jonze devotes plenty of screen time to shots of his fellow Los Angeles denizens, nearly all of them tethered to ever-shrinking devices connecting them to everything and nothing—googlefied lemmings in self-imposed pleasure bubbles.

Initially, the most obvious sociological point of “Her” is our disturbing connection to machines over genuine human contact, personified by Theodore’s awkward send-off with a blind dater (Olivia Wilde) and the all-too-human flaws of the relationship to his ex-wife (Rooney Mara).

But the film’s ultimate genius is in upending the fantasy of the perfect robo-partner by rendering Samantha as a three-dimensional character whose superintelligence can’t overcome the fragile emotions of her gradually developing humanity. In taking this route, Jonze ensures that the lazy comedic potentials of a man falling in love with an operating system are quickly eschewed in favor of romance that is genuine and difficult.

For the entirety of “Her,” — which I saw months before its overwhelming, “best of the year” Oscar buzz — I was under the misapprehension that it was directed by Michel Gondry, because its themes are more Gondryian than Jonzeian: “Eternal Sunshine of the Spotless Mind,” “The Science of Sleep” and even “Be Kind, Rewind” incorporate technological advancements designed to help people escape and forget, when in the end, only by confronting can we move on.

This is what Jonze’s devastating new film is saying, too: Our machines may be growing more human by the hour, but they won’t replace human problems; if anything, they will only intensify them.