Movie Review: Schlocky “Moonfall” Goes Where Many Films Have Gone Before 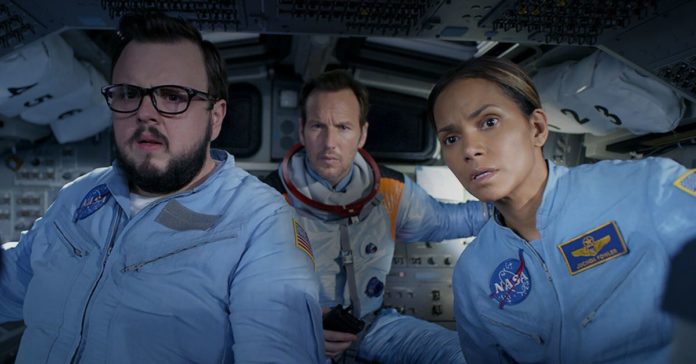 To the astronomically uninformed, it doesn’t sound like such a big deal: The moon’s orbit has shifted out of alignment. But evidently, this phenomenon, never encountered in the history of lunar orbit, is the prelude to an extinction-level event.

That’s the premise of Roland Emmerich’s “Moonfall.” When NASA, soon to be led by Halle Berry’s Jo Fowler, discovers this cosmic phenomenon, the Earth has all of three weeks to prevent its destruction. The Moon, you see—which is really a hollow, prehistoric ET base, naturally, and is brimming with malcontent artificial intelligence bent on the destruction of human life—is on course to plummet into Earth’s atmosphere and explode into a bazillion shards like a fatal piñata, prompting tsunamis from the world’s oceans and obliterating sentient life.

“Moonfall” is spectacularly bad, in a way few movies are. Its badness laps itself, coming full circle until it is almost good, in the underground, ironically appreciated realm of Uwe Boll and Ed Wood. Someone allowed Emmerich and his crack team to spend $146 million on what is essentially a schlocky B-movie, the sort of risible product tailor-made for a “Mystery Science Theater 3000” riff session.

None of the budget is well spent. The CGI is among the most hackneyed and artificial I’ve ever seen put to use in a mainstream blockbuster. The placement of live actors in front of green-screen technology is pitifully transparent, and for a film that utilizes the awesome scope of IMAX technology, it offers a dearth of memorable images.

As for the story, if you feel you’ve seen this movie before, it’s because you have. The plot is cobbled crudely from sources both venerated and ridiculous—from the most bong-loaded segments of “Ancient Aliens” to the cryptic heft of “2001: A Space Odyssey”—all of it over-explained to the point of parody. This is a film that leaves nothing to the imagination. It is catered to appeal to Middle America, Joe Sixpack and the international market. Easy to debunk, it is hardly even worth the customary harrumphing tweetstorm from Neil deGrasse Tyson, though we’ll probably get one anyway.

The dialogue is so awkward—so ham-fisted—that it’s as if it assisted by a faulty Google Autocomplete, and the actors deserve a signing bonus for performing their lines with a straight face. Time is of the essence for Berry’s exasperated NASA director, but instead of conveying this panic with the economy of language the moment deserves, she speaks in poetry: “The sand in the hourglass is dropping quickly for all of us.” Then there’s this observation, when Berry and her ragtag army are about to enter the hollow moon: “I hope the moon holds together—at least for a little while, anyway.” It’s Whitman; it’s Thoreau.

“Moonfall” is hilarious when it’s not trying to be. In part, Emmerich’s folly is such a head-shaking colossus of ineptitude because it begs to be taken seriously. There are moments of levity, but they’re mostly embarrassing—a “Karen” joke that feels years behind its sell-by date, a bit of Elon Musk product placement. We are worlds away from the bleakly comic satire of our most recent end-of-the-world disaster flick, “Don’t Look Up.” Emmerich doesn’t dare insert a scintilla of politics in “Moonfall.” His objective is far too anodyne, too toothless.

The only compliment I can offer the film is that, like an astral body hurtling through space, it is always in motion. “Moonfall” is never boring, but, then again, it never stops to think.