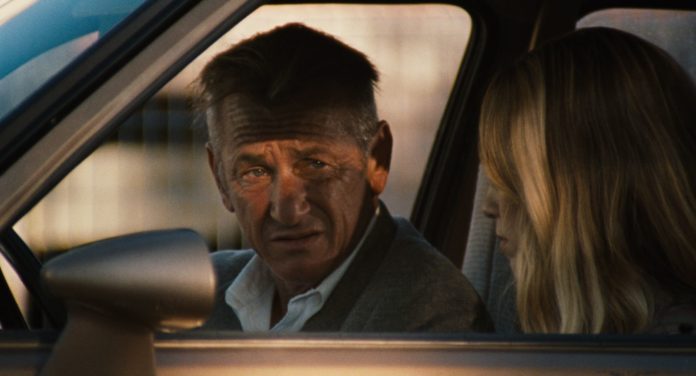 In 1995, criminal counterfeiter John Vogel flamed out in a blaze of glory, crashing a car in a ditch in Rushmore, Minnesota, and putting a bullet to his head at the end of a high-speed police chase. By that point, he had printed some $22 million in fake money, passing at least $50,000 of it—a lifelong huckster’s final act of deception, on his grandest scale.

Inconceivably, this most cinematic element of Vogel’s life is nearly absent from director/actor Sean Penn’s “Flag Day,” which filters Vogel’s mercurial legacy through the perspective of his daughter, journalist Jennifer Vogel. Relying too heavily on the latter’s 2005 memoir Flim-Flam Man: The True Story of My Father’s Counterfeit Life, Penn commits a cardinal sin in storytelling for which a reporter like Jennifer Vogel would chastise him: It buries the lede.

Sure, there is a framing device to open the film, in which Jennifer (Dylan Penn) is told of her father’s spectacular criminal operation by a U.S. Marshall (an underused Regina King). But the details of his elaborate counterfeiting scheme appear again only as a rushed postscript, when they should be a central focus.

Instead, the picture takes place in the haze of Jennifer’s memory, from a childhood ping-ponging between her alcoholic mother (Katheryn Winnick) and her slippery con-artist father (Sean Penn), through her rebellious teenage years, to her professional ascent as a writer. It’s about a loss of innocence, as we experience, with Jennifer, the singular thrall of being daddy’s little girl gradually eroding into a concrete understanding that she, like everyone else, is another one of her father’s marks. “Flag Day,” down to the too-obvious irony of its patriotic title (John Vogel, we learn, was born on Flag Day), reveals the calcified underbelly the American Dream, an approach that would be more compelling if dozens of better films hadn’t already mined the same terrain.

Penn films the early scenes as an impressionistic, not-yet-soured Midwestern idyll, where the recollected images are grainy, incomplete and not always in focus. As a director, the influence of cinema’s great Terences, Malick and Davies, weigh heavily on his style. Original songs from Cat Power lend a woozy, russet tenor to the images, suggesting that in another time, Penn would have made a fine music video director.

Appropriately enough, the film settles into a more concrete visual language as Jennifer matures, and her memories ossify into a diamond hardness. Despite its flaws, “Flag Day” is probably Penn’s second-best film after his exemplary “Into the Wild,” because his tendencies toward sanctimony and ostentation are abandoned; he wallows in the mud with John Vogel, who proves to be an ideal vessel for the combination of charisma and self-destruction that has defined the actor’s trademark combustibility.

But this is Jennifer’s story, and like “Hillbilly Elegy,” it’s predicated on the character rising above her station—transcending the harsh limitations of her abusive upbringing to make something of herself. It’s a better movie than Ron Howard’s Razzie-nominated freak show, but it suffers from a similarly reductive and tidy message. And, like “Hillbilly Elegy,” it was doubtless better suited as a memoir than a movie. There just isn’t enough there there to justify a story whose dramas feel all too familiar.

What is not a common trope is the elevation of such a minor criminal into a world-class counterfeiter. John Vogel was by all accounts a serial liar and get-rich-quick schemer without a discernable talent or business acumen—until he realized how to print money with an artistry that nearly fooled the authorities. “It’s beautiful,” Jennifer says, when handling one of her father’s lifelike examples of Monopoly money, admiring, for the first time in her life, John Vogel’s skill at something. It’s a pity we don’t get to know more about how he did it.