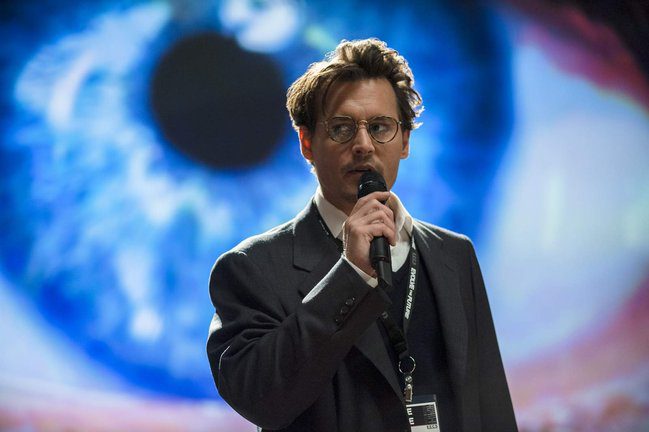 Despite all of its copious CGI and its themes tailored for the 21st century, Wally Pfister’s futurist parable “Transcendence” (opening wide today) is in some ways an old-fashioned science-fiction film, reflecting the moral-driven finger-wagging found in the genre’s 1950s prime. It is, for better and worse, unashamedly didactic. But unlike the ‘50s thrillers, whose enemies—inevitably invaders from outer space—stood in for the Red Scare of Communism, the target of this tech-savvy cautionary tale is our own ambition on the cusp of the Singularity. In efforts to create artificial intelligence in his image, man will be man’s downfall.

Johnny Depp and Rebecca Hall play Will and Evelyn Caster, partners in life and science, whose groundbreaking research focuses on the development of synthetic consciousness. Their piece de resistance is a giant, HAL-like mainframe called PiNN, which exhibits inchoate signs of artificial intelligence. When Will is shot with a polonium-laced bullet outside a tech conference—along with many of his AI-obsessed colleagues the world over, in a multipronged onslaught from a Luddite terrorist organization—he is given a prognosis of one month. For Evelyn, this may mean just enough time to apply a controversial method of consciousness cloning, successfully engineered on a primate, to her husband’s dying body, in effect keeping Will alive in ones and zeros.

If Evelyn’s attempts failed, “Transcendence” would be a short movie. Her efforts work, and the rest of the film charts the evolution of this cyberspace vision of Will. Still played by a now-disembodied Depp, he’s an accumulation of data with the apparent pretense of consciousness—an omnipresent talking head on a computer screen whose power and scope spreads across the world faster than a Justin Bieber tweet—or than a metastasizing cancer. As this artificial Will increases to godlike, Big Brother dimensions, his ability to affect scientific change also multiplies exponentially, to the point that he’s curing lifelong illnesses in seconds using nanotechnology, from the auspices of an underground laboratory underneath a shuttered desert town. But at what cost?

As “Transcendence” continues on its elliptical narrative, its heroes and villains become increasingly blurry blips on the frontiers of science, and you may find your allegiances gradually shifting, even to the point of sympathizing with terrorists. Credit the savvy screenplay by first-time writer Jack Paglen for broaching these heady, futuristic concepts and, in the guise of a Hollywood blockbuster, offering up persuasive arguments for both playing god and staying out of the artificial-intelligence game.

The director Pfister, who has been Christopher Nolan’s longtime cinematographer, shows in his authorial debut that he learned a lot from his mentor; this is a dazzling movie to look at it, with an appropriately creepy performance from Depp and fine work from Hall as its conflicted heroine. Morgan Freeman shows up for work, too, as a predictably saintly elder statesman of scientific research, though in a twist of convention, it’s Paul Bettany, as another of Will and Evelyn’s colleagues, who provides the movie’s gravitas-laden voice-over narration, not Freeman.

But, to follow up on the HAL 9000 reference earlier, it’s remarkable how many of this film’s themes of technological self-awareness owe to “2001: A Space Odyssey,” which seems to grow more relevant every year; “Transcendence” still seems a mile a behind this 46-year-old masterpiece in its scary, trippy imagination. While we can argue forever about the symbolically dense ending of “2001,” “Transcendence” simultaneously leaves us wanting more and less. By its climax, it wants to be taken as eco-conscious agitprop and sweeping romance, both us which conflate the film’s previously laser-focused study on the perils and progress of limitless technology, all for the sake of commercial expedience. “Transcendence” may touch on Kurzweilian subject matter, but it ultimately becomes easy to dismiss it as “just a movie.”