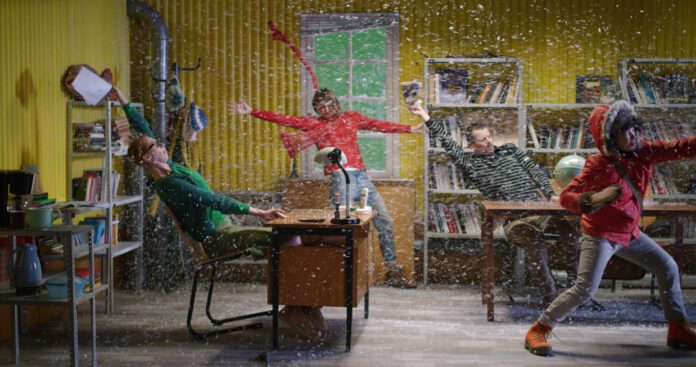 Post-“La La Land,” whimsy is back in vogue, and that movie’s French heir, “Lost in Paris,” follows in its magical, choreographed footsteps. But if the romance of “La La Land” took its cue from jazz and “The Umbrellas of Cherbourg,” the wacky couplings in “Lost in Paris” owe debts to everyone from Buster Keaton to René Clair to Jacques Tati to Jerry Lewis to Wes Anderson. Bursting with color and hyperreal joie de vivre, it’s a live-action cartoon set in the Paris of every foreign dreamer’s fantasies, whose action culminates—where else?—at the top of the Eiffel Tower.

The story, which exists mostly as the clothesline on which to hang gag after gag, involves Fiona (Fiona Gordon), a Canadian librarian and the niece of Martha, a spry Parisian pensioner (Emmanuelle Riva). Fiona responds to an urgent letter from her 88-year-old aunt, but when she arrives in the City of Light, Martha is nowhere to be found.

The mystery is handled leisurely, allowing plenty of time to observe Fiona, adrift with a comically enormous backpack and a minimal command of the language, stumbling from one high jink to another. Eventually, fate places her in the circumference of Dom (Dominique Abel), a determined homeless man who speaks as much English as she French. In a city of 2.2 million people, they can’t seem to escape each other, and pretty soon, familiarity breeds affection.

The gangly Gordon and the raffish Abel have effortless chemistry, and there’s good reason for it: They’re married in real life, and they co-wrote and directed this film, along with three lesser-seen features throughout the Aughts. Their talents are prodigious and manifold, and their sensibility is full of much-needed sunshine.

“Lost in Paris” has all the fluffy machinations of a Broadway musical comedy—mistaken identities, improbable reconnections, ridiculous plot points—but their command of the filmic medium is impeccable. The movie contains brilliantly inspired sight gags, such as the POV iris shot through a tiny hole in a newspaper formed by Dom’s cigarette, and the directors’ playful use of a wall-breaking split-screen to connect characters miles apart. Sound is also integrated with exceptional dexterity, most notably in a wonderful sequence involving the bass-heavy speaker system of a floating restaurant.

It might take a half-hour or so to connect to the film’s groove: Early on, I found its preciousness grating, as if it were parodying the aforementioned Wes Anderson. But it grows on you like a lovely bougainvillea if you let it. Romance, destiny, the infinite possibilities of filmed action—these have been there since the birth of cinema. This loopy comedy might be the most classicist film of 2017.

“Lost in Paris” opens Friday at Living Room Theaters at FAU, Movies of Delray, Movies of Lake Worth, Lake Worth Playhouse, Savor Cinema in Fort Lauderdale and Cinema Paradiso in Hollywood.

“Wish Upon,” the latest example of teen-targeted horror schlock, is about the discovery of an octagonal box from ancient China that fulfills wishes for its owner, only to take something (or more accurately, someone) from them in return.

With its bordello-red coloring and embossed letters, the box makes for a plum dumpster discovery for Jonathan Shannon (Ryan Phillippe), a widowed flea-market salvager living hand to mouth with his daughter Clare (Joey King), a high schooler. “That’ll fetch a ton at the swap meet!” he offers.

Leaving little room for ambiguity about this destructive treasure, director John R. Leonetti then slowly cranes his camera toward a menacing sculpted gargoyle perched ominously above the garbage bins, bolding what the soundtrack and screenplay have already underlined for us.

In fact, the gallant Jonathan doesn’t hawk his find: He gifts it to Clare, who happens to be studying Mandarin in school. She can read only two words of the antiquated text on the box: “seven wishes.” For kicks, she wishes ill upon a popular mean girl. You can fill in what happens next.

And so it goes with this hackneyed horror pic grafted onto a hackneyed teen-angst drama, its cast chockablock with self-absorbed millennials with all the smarts and common sense of a victim in a “Final Destination” sequel. Worst of all is Clare. Despite the initial likeability of King’s performance, screenwriter Barbara Marshall’s schizoid script sends her in directions that contradict everything we’ve come to know about her character: After a few blood-traded wishes based on greed and vanity, this artsy outsider becomes a materialistic, superficial fame-whore. That she continues to utilize the box, despite the bodies “coincidentally” piling up around her, makes her either tone-deaf or psychopathic.

It would be tempting to draw an admirably cynical subtext from the film’s morally bankrupt antihero—to see her ascension to prosperity on the hides of others as a metaphor for predatory capitalism. This would be ascribing too much credit to this tacky film. Leonetti’s direction is as soulless as his lead character, more concerned with perverse “thrills” than exploring the calculus of Clare’s mortal bartering. There is much silly death-dodging and death-succumbing, dutifully protracting its secondhand set pieces (including a garbage disposal incident handled much better on “Orphan Black”) for maximum spectator squirms.

Like a “Twilight Zone” teleplay drained of depth and dimension, “Wish Upon” is all sport for Leonetti. And when everything is a game, it’s hard to care about any of this nonsense.

“Wish Upon” opens Friday at most area theaters.