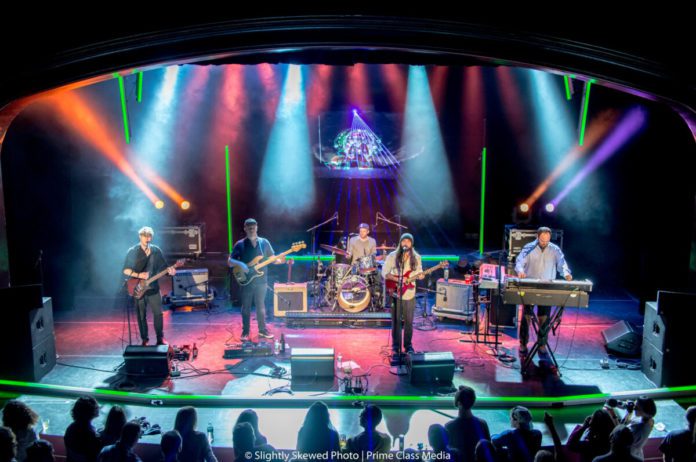 South Florida bands have endured a year of almost no live performances. We caught up with five of the region’s top recording artists, from up-and-comers to linchpins of the scene, to see how they’re surviving—and thriving—amid a tumultuous landscape.

What happens when a handful of kids from Upstate New York make their way to South Florida to start a band? In the case of the Heavy Pets, it marks the beginning of a 15-years-and-counting jam-band odyssey.

And yes, that is “jam band” as in the Grateful Dead, Phish and other polyphonic improvisational outfits known for their marathon live sets and dedicated followings. The Heavy Pets’ unique fusion of rock, funk, reggae and performative spontaneity fits the bill perfectly.

Formed in late 2005 by Mike Garulli and Jeff Lloyd, who had been playing music together for nearly 10 years before relocating to Fort Lauderdale for work, the band found early success when its music fell into daily rotation on the XM satellite radio station Jam On, and won a fan vote contest to play on the bill at Central Florida’s dearly departed Langerado Music Festival. As Garulli puts it, “once we had those two things going for us, we just branched out and started booking gigs all over the country, and kind of chose to put the band first in our lives.”

And the members of the Heavy Pets never stopped putting the band first. Following that early spark that ignited the group’s rise, near-constant touring over the next 15 years elevated its notoriety within the jam-band scene at large. During that time, the group played an untold number of shows around the country and released eight critically acclaimed studio albums.

Though the group did occasionally support larger acts in the earlier stages of its career, as Garulli puts it, “we always liked headlining our own shows from the start, because we had a lot of material, and we just felt like we had a lot to say musically. We wanted that two-hour slot where we can get up there and do everything we want to do.”

A particular favorite of the group’s is a regular multi-gig stint at the Green Parrot in Key West, in which the band plays nearly 12 hours of music over three nights without repeating any songs. “Throughout the years that has been just an epic showcase for us, and an epic experience for our fans,” Garulli shares.

The Heavy Pets currently consist of Lloyd (guitar/vocals), Garulli (guitar/ vocals), Jim Wuest (keyboards/vocals), Jamie Newitt (drums/vocals) and Tony D’Amato (bass), and each of its members brings compositions to the table. This unorthodox structure has led to the group operating as something of a creative collective that doesn’t seem to have (or need) a sole bandleader.

“We’ve always been a fan of music like that, where we can support each other and put multiple harmonies on a song, and switch off on lead vocals or lead guitar,” Garulli says. “It’s a great way to grow together, and support each other, and figure out our strengths.”

These days, the pandemic and its accompanying effects have separated the band’s members by distance, but they intend to get back together as soon as it’s safe to tour again. In the meantime, its members have remained musically active. Garulli plans to release his first solo record under his own name in 2021, and plays frequently in and around Boca Raton.

He assures that the group isn’t going away. “We really never stopped putting the band first. We’ve been working all these years on it. … It’s definitely become our lives.”

Find music from the Heavy Pets at theheavypets.bandcamp.com or on your streaming service of choice.