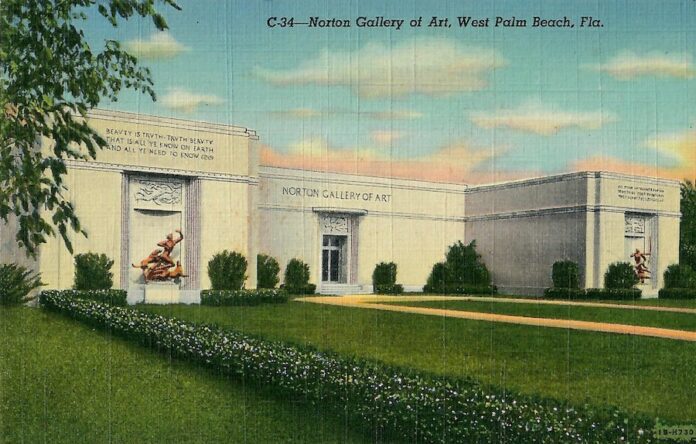 Many of us don’t last to 80 years. If we do, we’ve beaten the average, according the latest numbers for life expectancy in the U.S. But the Norton Museum of Art is anything but in its twilight. On the relative heels of its $100 million expansion, you could say it enters its eighth decade this year haler than ever.

In a rare moment of self-examination, the Norton has agreed that 80 is a landmark number, and the resulting exhibition “Celebrating the Norton: Eighty Years” showcases key acquisitions through the decades, archival correspondence from the Nortons themselves, vintage exhibition catalogs and more. Curated by former archivist Marie Penny, “Celebrating the Norton” occupies just a single gallery on the second floor, but it’s flush with fascinating information. One example: In a yellowed letter from founder Ralph Hubbard Norton to surrealist artist George Grosz, the gallerist admits he is flummoxed by Grosz’s gluttonous watercolor “Eaten and to Be Eaten,” and kindly asks the artist to explain some of his imagery in the painting, namely the “head of a person who has been accustomed to good eating, laid open, so that the contents could be seen.”

Asking a surrealist artist to interpret his own work is an almost philistine request today, but the point of the letter is that Norton had a curious mind. That he was considering a Grosz purchase along Old Masters shows that he had modernist sensibilities from the museum’s inception.

Norton opened the museum—the first in South Florida—for the expressed “education and enjoyment of the public.” He commissioned a famous Palm Beach architect, Marion Sims Wyeth, to design the building, and offered free admission (which is still a feature at the Norton for select visitors). Early acquisitions on display in “Celebrating the Norton,” from priceless Chinese sculptures in green jade to tactile impasto landscapes like George Bellows’ “Winter Afternoon,” speak to Norton’s wide-ranging tastes. Though he died 12 years after the establishment of the museum, his omnivorous appetite toward important art in various styles carried over to its future executive directors.

Works on display here speak to that eclecticism, from stirringly realist “art-room” paintings like Willem Van Haecht II’s “Interior of the Salon of the Archduchess Isabella of Austria” to groundbreaking contemporary sculpture and photography. The stylistic gamut in “Celebrating the Norton” includes pioneering color field abstractions to works that sardonically countered the dominance of abstract expressionism, like Larry Rivers’ sardonic pencil drawing “French Vocabulary Lesson.”

Curator Penny had the daunting, some would say unenviable, challenge of selecting only a handful of works to represent 80 years of history and progress, culling a collection of many thousands of works down to 20 or so. Some of these are no-brainers, like one of Sam Gilliam’s quilt-like works from 1977, remarkably the first artwork by a Black artist purchased by the Norton. The museum would spend the proceeding decades making up for lost time, showcasing African-American artists such as Jonathan Green’s floridly vivid memory painting “Bathing,” also on display here.

You could say that “Celebrating the Norton” is a history of the Norton Museum, as opposed to the history. Two dozen completely different works could be hung in this gallery and offer an equally representative survey of the museum’s depth and breadth. Ever more reason, perhaps, to revisit this appropriate self-toast in another 10 or 20 years.

“Celebrating the Norton: Eighty Years” runs through June 13 the Norton Museum of Art, 1450 S. Dixie Highway. Admission is $15 seniors, $18 general and $5 students, and is free for West Palm Beach residents on Saturdays. The museum is currently operating on reduced hours of 11 a.m. to 7 p.m. Fridays and 10 a.m. to 5 p.m. Saturdays and Sundays. For information, call 561/832-5196 or visit norton.org.