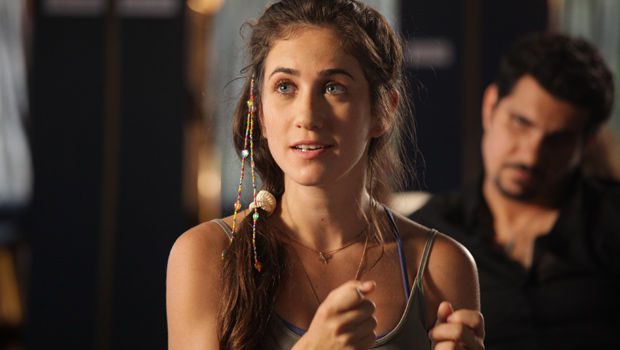 This year’s fest marks a new direction for the company, with Ellen Wedner, a veteran of Miami Jewish Film Festival, migrating two counties north to take over its directing duties. The result is a seemingly satisfying cross-section of documentaries and fiction films that run the gamut from contemporary Israeli imports to European World War II dramas to nonfiction explorations of Jewish innovators (for the complete list and show times, visitpalmbeachjewishfilm.org).

I had the opportunity to review a couple of the festival’s titles in advance. Both films, in one way or another, aspire to be Hollywood lite, but only one of them nails the style with success: That would be “The World is Funny,” an ensemble drama from veteran Israeli filmmaker Shemi Zarhin.

The big-studio concessions mostly consist of a manipulative, middlebrow score and some ghastly details, like when a character drops to one knee to propose to his girlfriend — I have it on good authority that Israelis simply don’t do that. But stick with this comedic drama, and its problems dissipate as its mysteries accumulate.

At the center of the tale are three estranged siblings in Tiberias — a family torn asunder by death, spite and regret — all dealing with medical questions with few solutions. Hot-headed father Meron (Danny Steg), whose wife, for reasons unknown, is no longer in the picture, finds that his son Nesi (Moshe Ashkenazi) has just woken from a nine-year coma; he hasn’t been conscious since he was 10. Golan (Eli Finish), a local DJ, wants to marry his Russian girlfriend Natasha (Ola Schur Selektar), who is in the final stages of breast cancer and who suffers manic mood swings after stopping her chemotherapy. And Yardena (Assi Levy) finds herself inexplicably pregnant, spending the movie piecing together any possible sexual trysts (or sexual abuses) that may have caused the conception. Jaunty cleaning-girl Tsephi (Naama Shitrit) connects them and their stories, becoming something of a local tribune and raconteur.

Even the seemingly risible humor in “The World is Funny,” which initially feels tonally awkward, eventually has meaningful purposes, as the movie’s novelistic sweep takes hold. Zarhin wisely protracts the film’s many unknowns — some of which remain unknown when the final credits roll — which keep us at an even keel with the characters, as they fumble through the past to try and understand the present.

The film’s structure and style aren’t groundbreaking, but they are plied with much care and delicacy. On a side note, Israeli viewers will appreciate one of the movie’s underlying threads: nostalgia for the ‘60s Israeli comedy troupe Gashash, which gives the film its title.

As for the other glossy studio-style movie I viewed in advance, “Cupcakes” is an egregious misfire from the respected writer-director Eytan Fox (whose “Yossi and Jagger” is a transcendent LGBT classic).

Israeli media and entertainment personalities — including model Yael Bar-Zohar, blogger Keren Berger and musician Efrat Dor — play gently parodied versions of themselves, brought together under their fandom for the annual, real-life Universong TV special, in which European nations submit a singer, or group of singers, into an Olympic-style competition. Ofer Schechter, playing a gender-bending version of himself, submits a Universong demo of the six friends performing an original song together, and—surprise—they are promptly chosen to represent Israel in next year’s competition.

The characters are invariably impeded by their social and romantic situations, confronting one-dimensional roadblocks before inevitably making it to Universong in Paris, where the action turns even schmaltzier and more implausible, if such a thing were possible. The movie’s saccharine core might have gone down easier if it actually made you laugh now and then, but its American-style humor is broad and witless, as funny as a funeral dirge.

Despite the inside jokes that only Israelis will understand, the hollow “Cupcakes” is unashamedly Americanized, aping Hollywood in its rhythms, casting and mannerisms. I don’t know about you, but when I want to see a foreign-language film, I’d prefer to be swept away into a place other than the one I’m living in, one that shines a spotlight on a disparate culture. But, like its title, “Cupcakes” is comfort food for U.S. audiences.