Porch to Posh: The Florida Room 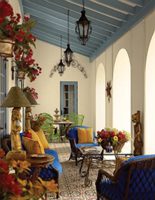 Not many states can boast having specific interior spaces named in their honor. Then again, not many spaces are as iconic as the “Florida room.” Since its introduction in the 1950s prior to the air conditioning boom, this relaxing room with a view has evolved from a simple screened-in way to beat the heat to an essential element in many Sunshine State homes—one filled with endless design possibilities.

The Cultural Council of Palm Beach County is celebrating the space with a unique exhibition that runs through March 29. “Interior Design: The Florida Room”—set inside the Council gallery at 601 Lake Ave. in Lake Worth—presents a variety of interpretations, courtesy of nine of the county’s top interior designers.

Inspired by the sea urchin, the room by Gil Walsh of West Palm Beach’s Gil Walsh Interiors is done in a deep purple with rounded pillows in the shape of the ocean-dwelling creature. Angela Reynolds of Jupiter’s Angela Reynolds Design features a swing seat as the centerpiece of her vignette, a lavender and pink Florida room that includes a white coffee table topped by succulents and rounded oil paintings by Deziree Smith on walls that sport butterflies and bees.

Boca-based Judy Weiss and Nickie Siegel, of Judy Weiss Interior Designs and NLS Creations respectively, teamed up to create their bold Florida room interpretation. Featuring turquoise and orange walls, pillows in a rainbow-colored Missoni zigzag pattern and a peacock on a stand, the duo dubbed their creation “A Riot of Color.”

“We had a feeling that when people think of the Florida room, they think of forty, sixty year ago,” Weiss says. “We wanted to take that and update it … and use Florida colors, just to be very vibrant and uplifting.” Siegel notes that it was the Missoni fabric covering the pillowcases that was the inspiration for the overall color. “We took the paint colors we used specifically from the fabrics,” she says. “We started with the white sofa and grew into the colors by way of the fabrics.”

Also inspired by color is the vignette that opens the exhibition by Lake Worth-based designer William Wright. A more subdued look compared to the Weiss-Siegel creation, Wright’s room is dominated by grays with bold hints of oranges and yellows. “I started with the color, the citrus colors of Florida—tangerine and orange—and then added subtle gray, which is very trendy right now, to tone it down,” Wright says.

Accompanying each of the vignettes are concept boards that give attendees additional insights into the design process through everything from fabric swatches to specific shapes that influenced selections. There also is a list of furnishings included in the room (along with prices). All of the items are for sale, with proceeds going to the Cultural Council.

Overall, each of the vignettes—set up in a row of five, with the remaining three in the back part of the gallery—comes across as a cabinet of curiosities. It’s something like a game to move from one to the other, digesting the overall look and feel, deciding which ones suit your own taste. Along the way, you savor the small details, the little secrets and bits of Florida—from a lamp made of oyster shells to a tray featuring a shell motif.

A young woman overheard talking about the pieces she liked in one of the vignettes summed up the exhibition nicely. “I will have this one day,” she said. After all, being inspired is what it’s all about.