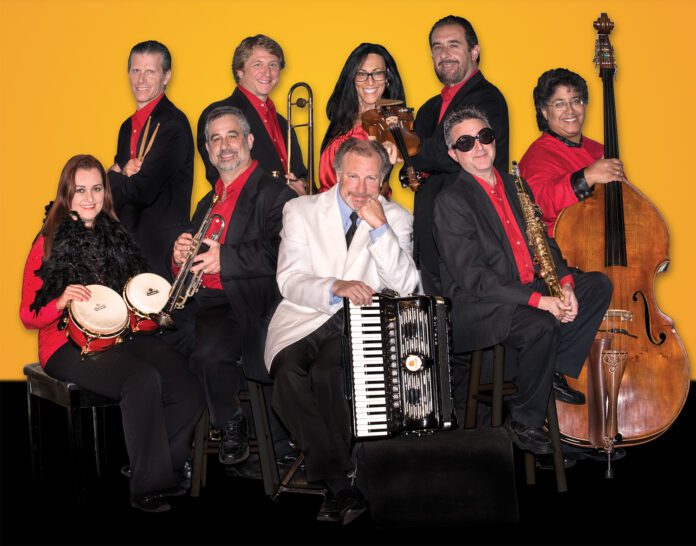 Late in our conversation last week, Aaron Kula, maestro of FAU Libraries’ acclaimed Klezmer Company Orchestra, admitted that he hasn’t been sleeping much lately. But his insomnia is well justified—even expected—considering the weight that sits on his shoulders.

Never one to simply play your grandmother’s klezmer music (though he surely could), Kula gets his inspiration by pushing the boundaries of that native Jewish music into new directions, fusing world music, blues and orchestral folk into the accordion-driven paradigm—all of it reimagined from FAU Libraries’ Print Music Collection. Each KCO performance, therefore, is one of a kind, a sonic quilt unlike any other.

This Sunday’s upcoming concert, at the Carole and Barry Kaye Auditorium, is no exception. In fact, it may be the orchestra’s most dramatic challenge yet. Titled JubanoJazz!, it will feature the 27-piece band combining klezmer with Latin jazz music and, in a rare move aimed at fostering the next generation of musical talent, will include compositions by two young composers selected from an international competition. In addition, guest vocalist Graham Fandrei will assist on the 23 new Latin klezmer arrangements by Kula and trumpeter Chaim Rubinov.

In other words, there’s a lot of moving parts to this concert, and Kula and his team have to nail it on their first and only attempt.

“This March concert has pushed me to my limits, because in addition to me, there are four other composers that are contributing to this concert. That’s a first,” Kula says. “I also wrote 2,000 pages of music for this concert. It’s going to be great fun, but the preparation for this was extraordinary.

“And if we don’t start doing something that really connects to a more global audience and find a way to revive it in a new, imaginative way, then the music and melodies are just going to disappear,” he continues. “And so my job is to massage the brain and the imagination.”

How did the idea for JubanoJazz originate?

It’s sort of 17 years in the making. This is my 17th year running these large-scale, Klezmer Company Orchestra fusion concerts, and over the course of the past few years, we have been cultivating Latin and klezmer fusion music. Every year it’s been one or two pieces, and I decided last year that we’ve accumulated enough expertise in the fusion language of blending these two genres together that I could create a single themed concert. And I created the word JubanoJazz. It’s a Kula word. You can’t look it up in the dictionary or the encyclopedia.

What does it mean?

I wanted to find a word that encapsulates anything and everything that could relate to Latin, Caribbean and Cuban cultures. There is no word that can capture all of that, so I figured I might as well make up one. What is working is that everyone seems to get what I’m doing. We have 23 completely new, reimagined compositions that use every possible combination of Latin rhythm or Latin percussion or Cuban rhythm or Cuban percussion.

What struck you about these two composers that you selected to work with in this project? What convinced you of their talent?

Their pieces just worked. Their pieces were right on; first of all, they did what I love most: They did something very personal. One person is Venezuelan and one person is Brazilian. And they each used their own heritage and their relationship with music from their country as their source of inspiration when creating this new composition with a vintage klezmer melody.

Are there any similarities between klezmer music and Latin jazz?

There are a few nuggets that you can find in the folk tradition. Mostly it has to do with the combination of short and long rhythms. So there are a few intersection nuggets. But the bottom line is that one is a European tradition and the other is a different geographic location, which ranges from South America all the way to the other side of the water to Cuba. Let’s just say it’s happenstance that there’s any kind of a relationship. You have to creatively blend the two musical cultures.

Have you found that you’ve been introducing new demographics to klezmer music through fusion programs like this?

Absolutely. We’ve played some of this music, in a test run, in Miami and in the Miniaci Theater, in December, and I had non-Jews and non-Eastern Europeans … we had Argentineans and Brazilians come up and say, ‘I don’t know your music, but I love it. It relates to me.’ So what’s happening is we’re really playing music that everyone can relate to. All we’re doing is taking a melody and reimagining it in a context that’s familiar to people from South Florida.

Will this eventually be turned into a CD?

I certainly hope so. Every three years we do another CD, and next year we’re due for another one. I think I will call it JubanoJazz!

The other major development, from my vantage point, is that we’ll be doing the Florida premiere of Leonard Bernstein’s “On the Town,” in June, as part of the Spirit of America festival. I wanted to pick something that would knock people’s socks off, and I took nearly six months negotiating with the Leonard Bernstein Foundation and the publisher for the rights to perform a concert version of “On the Town.” We’ll have all the music and some of the dialogue. I’m hiring six professional opera singers—top of the line, top shelf people, and a union orchestra.

I’m going to reach my limit this season. I told my dean, you’re pushing me … I’m already up to 60 hours a week. There isn’t much more time; I might as well just move my bed into my office.