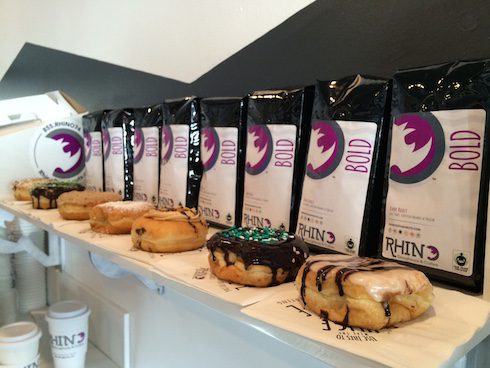 The long-anticipated opening of Rhino Doughnuts & Coffee is now here. The designer donut spot opened up shop last week, bringing Boca a slew of decadent donuts that taste as good as they look.

Crème brulee, smores, strawberry daiquiri, peanut butter and jelly – that’s just a sample of what Rhino has to offer. The Sunrise-based commissary bakes a slew of flavors every morning, delivering them fresh to the Boca location’s door every day at 5 a.m.

Popular staples, like cookies and cream and maple bacon, and the classic glazed and sprinkled donuts will be available daily, but expect a rotating menu every two to three days so there’s always something new to try.

There will also be “drunken” donuts – yep, that means exactly what you think it does – every Saturday and Sunday. Do note: they aren’t sold to anyone under 21.

Prices at the Mizner Park location are cheaper than other Rhino locations. While there, you can also snag Rhino bites (donut holes) muffins, cinnamon buns the size of your face and giant cookies. Rhino also brews fresh coffee in the sizes big, bigger and biggest.

We’ll keep you updated on the grand opening, which should fall sometime within the next two to three weeks.