Rising Past the Obstacles 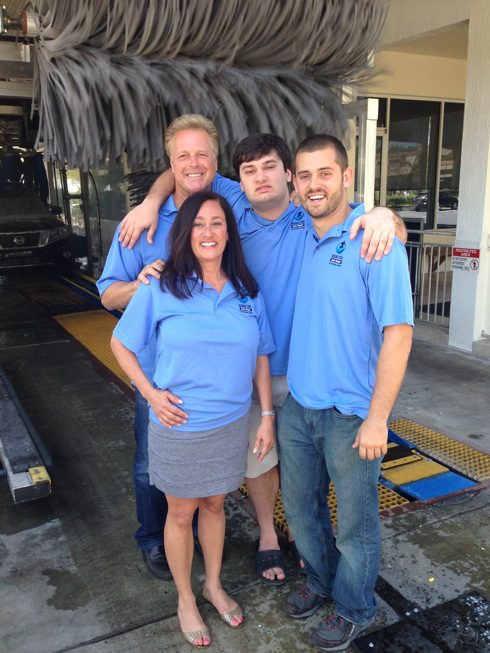 When you drive up to Rising Tide Car Wash in Parkland, you may notice a couple of things. You may notice the blue-and-sand-colored decor, or how efficiently quick a group of young men can wash a car, or the compact yet comfortable waiting room. What you may not know –– or notice –– is that more than 80 percent of the employees at Rising Tide fall somewhere on the autism spectrum.

A New York transplant who moved to South Florida in June 2012, John D’Eri left his world of litigation services and software support and partnered up with his oldest son, Thomas, to create a business that would allow young adults on the autism spectrum to prosper and create lives for themselves. The idea came to him while thinking about his family’s future; D’Eri’s youngest son, Andrew, was diagnosed with autism when he was 3 years old. Even with an early diagnosis and the ability to provide Andrew with the right resources and proper schooling, D’Eri was worried.

“I wouldn’t consider myself a success if I left this planet and Andrew had no where to go, no future, having to rely on his brother and becoming a burden,”says D’Eri. “That’s not a life. So, I decided to sell everything and use my knowledge in business to create a community where Andrew and others like him would work, and it could live beyond me.”

The father-son duo conducted a year’s worth of research before contacting Sonny’s Enterprises of Tamarac, the largest distributor of car wash equipment in the world (according to one independent study). With the distributor’s help, they ran a three-month pilot program at a Homestead car wash that would allow them to create a real-life setting while assessing their workers and the business itself. After 60 hours of film—and Excel sheets filled with 10,000 lines of information—they realized that their social mission alone could not drive a successful and sustainable business.

The D’Eri men then narrowed down the car-washing process down to a series of 46 steps that would allow each and every employee to succeed at the car wash. They would then assess and train the employees before they were required to complete the steps in under six minutes, three times in a row, with 100 percent accuracy.

“They like structure and repetitive tasks, because it gives them the capability to feel comfortable that they’re doing everything right without having to read someone’s facial expression or tone of voice,” says D’Eri.

With help from The Center for Autism and Related Disabilities at the University of Miami, word spread that their car wash was looking to hire young adults with autism. Rising Tide offers its employees $8 an hour plus tips, with the flexibility to work part- or full-time. Since opening a year ago, they have not fired any employees, and some have already moved up to higher positions like team supervisor or manager of the express lane tunnel.

When asked how some of his employees have changed since starting at Rising Tide, John was filled with anecdotes. He revealed that plenty of them didn’t like to speak or smile; now, that’s all they do. He also mentioned that a couple of the guys now have plans to move out of their respective homes and live together in an apartment. There is even one employee, Melvin, who recently bought himself a car –– and coming from a lower-class neighborhood, he never dreamed of having enough money to buy a car, let alone drive it to work.

“At first, no one believed me. Even my wife had no clue what I was talking about,” says D’Eri. “And it’s all been very inspiring, but now it’s time to scale it, replicate it and impact as many people as we can.”

Michelle Ferrand is a junior at Florida Atlantic University studying English Literature, Sociology and Women’s Studies, who is interning at Boca Raton magazine this summer. Disappointed with the lack of magic in the real world, she prefers to be curled up reading a good book or binge watching television shows on Netflix. She prefers an actual book to an e-reader and no, she doesn’t want to be a teacher. You can reach Michelle at michelle@bocamag.com.