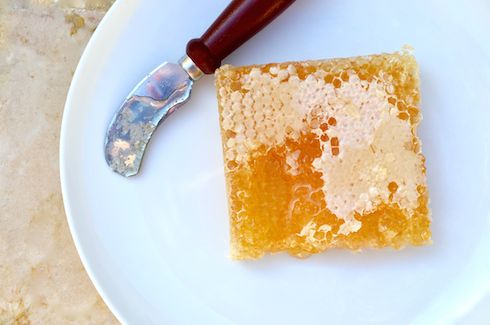 NEW BLOG SERIES: Our local foodie dishes on a versatile and all-natural treat.

The buzz around the cheese department at Whole Foods in Boca, as well as at The Cheese Course in Mizner Park, has nothing to do with curds and whey. Raw honeycomb is in season, and it’s popping up at stores across South Florida where artisanal cheeses, wines and breads are sold.

All of which begs the question: What do you do with it?

Raw honeycomb comes straight from the beehive, its cells oozing with the concentrated nectar that bees extract from flowers. The wax is 100-percent edible, natural and bursting with unrefined, full-bodied honey. If swallowing wax isn’t your thing, simply chew until the honey is extracted and discard the remains. Flavors vary slightly and are reflected by the type of flower from which the bees collect their nectar. One of the most popular flavors found in South Florida is orange blossom, which, as the name suggests, has sweet citrus notes.

The chief benefit in buying and consuming honeycomb, aside from its aesthetic appeal (talk about a conversation starter at the dining table!), is that the product is as raw and real as it gets. The unfiltered honey is some of the best tasting and healthiest available in stores. Unlike many brands sold in supermarkets that have been pasteurized and diluted by processed sweeteners, raw honey maintains its natural vitamins, antioxidants and nutrients.

Here are just a few ways to enjoy it:

• Grab a square of raw honeycomb and serve it on a warm piece of toast. For an added kick, sprinkle lightly with some flakey sea salt.

• Spread it over any of the following: cheese, warm cereal, waffles, warm biscuits.

• Mix it with yogurt or with a bowl of berries.

Amanda Jane is the creator of the food blog Seasonally Jane, a creative space where she shares her love of seasonally inspired cooking through original recipes, photography and writing.  Seasonally Jane celebrates the use of peak-season fruits and vegetables with an emphasis on organic whole foods and unique ingredients. Amanda launched her blog in September 2014 and is based in Lighthouse Point.