SeaSpray, Boca’s Only Dock-and-Dine Restaurant, Arrives at The Waterstone This Month 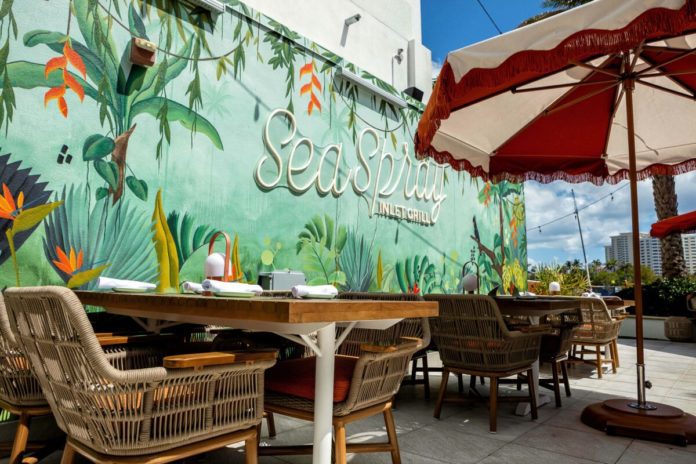 The only waterfront restaurant in Boca Raton has gotten a serious makeover.

Since it originally opened in 2015, the restaurant formerly known as Boca Landing at The Waterstone Resort & Marina had been the only true seaside restaurant in the city, featuring outdoor dining with views of Lake Boca Raton and the Boca Inlet. During an extensive half-million dollar renovation of the resort, a new venue, SeaSpray Inlet Grill, has taken over the space. With the facility’s major upgrade now complete, SeaSpray is set to open on June 14, and will for the first time offer dock-and-dine services so that patrons can arrive by boat.

Led by Executive Chef Kelley Randall, SeaSpray’s menu is described in a press release as “innovative, sustainably-minded,” and “rooted in traditional staples highlighted by local seafood.”

“You can come by boat or by car, have a bunch of burgers, order fresh salads and quality seafood options or reserve an 8 p.m. seating and dine more formally, for steak, grilled Mahi or other quality entrees,” says Randall, formerly of The Office in Delray Beach, Vic & Angelo’s in Palm Beach, and The Venu in Boynton Beach. “There’s both glitz and familiarity—but it’s a breezy vibe”

The 2,000 square foot al fresco dining space is highlighted by colorful umbrellas and includes a full bar. The centerpiece of the dining area’s decor is a mural by local artist Gabriela Benatar, which covers seven walls and took two months to complete.

Fare at the restaurant is reasonably priced, ranging from $15 for small plates to around $30 for most of the entrées, with a breakfast menu each morning and a happy hour menu on weekdays from the hours of 4 p.m. to. 6 p.m. The bar will also offer a mixologist-curated selection of enticing tropical-inspired craft cocktails.

Menu highlights will include:

SeaSpray opens to the public on June 14, and reservations can be made now at www.seasprayboca.com.