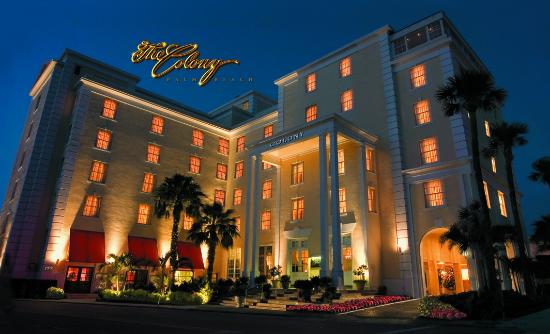 The headline, which arrived in my e-mail inbox in mid-August, was shocking: “The Colony Hotel, Palm Beach is CLOSING on Sept. 2.”

What? An institution like The Colony hotel, with its 55 years of history, is shuttering?!

Thankfully, no. A cursory glance at the missive’s fine print revealed that the closure is temporary, a five-week hiatus in which the entire property—meaning every room and restaurant, and even the lobby—is being redesigned. As we speak, director Carleton Varney, president of the internationally renowned Dorothy Draper & Company interior design firm, is working diligently to transform this landmark for the 21st century, maintaining its British Colonial foundation while lathering the property in vivid color. The completed fourth floor, for instance, now boasts 19 different paint colors, and every single room is different.

By the time the property reopens on Oct. 10, its rooms will also be outfitted with the latest technology, including “smart” TVs, Bluetooth-enabled telephones and “slow-glow” lights in the bathrooms. In all, the $9 million renovation will effectively create a “Colony 2.0.”

What may remain the same, however, is the venue’s venerable cabaret series in its Royal Room, which has been attracting top-shelf vocalists and entertainers for the past 12 years. Here’s a glimpse at our top five most-anticipated Colony concerts in its lucky 13th season.

As Barbra Streisand’s younger half-sister, Roslyn Kind was born in the shadow of celebrity, and their collaboration has been artistic as well as familial; Kind has been featured on two of her sister’s national tours (in 2012 and 2013) and has sold out Broadway and off-Broadway shows on her own as well. This marks her Royal Room debut.

Here’s another Royal Room debut, though it’s hard to believe, since the Lettermen have been recording music since 1959. This group helped establish the close-harmony pop formula and has scored 16 Top 10 singles, including “Can’t Take My Eyes Off of You,” “Put Your Head on My Shoulder” and “The Way You Look Tonight.” Tony Butala, one original member of the Lettermen, still performs with the group, which features two other members who joined in the 1980s.

This guy needs no introduction, returning to the Colony Palm Beach by popular demand after his debut appearance earlier this year. A classic crooner in the Sinatra/Dean Martin mold, Philbin’s music career started off as a poorly reviewed side project to his TV hosting gigs, but has since matured in a respectable (and respected) sound. A perennially young 83, Philbin has earned his distinction as “the hardest-working man in show business.”

The season’s final Royal Room debut is an outlier this season: a comedian and non-singer who can nonetheless carry a cabaret space with the best of them. Before there was Darrell Hammond and Frank Caliendo, there was Little, an Ottawa-born impressionist whose ability to mimic people in power began with local Canadian politicians and has since spread across the fruited plain. A regular at White House Correspondents’ Dinners and HBO specials, Little’s exhaustive Rolodex of impersonations includes Frank Sinatra, Gary Cooper, Dr. Ruth, Clint Eastwood, Kermit the Frog and every American president from John F. Kennedy to Barack Obama.

The Royal Room cabaret’s full season schedule is expected to be posted soon atthecolonypalmbeach.com. For tickets and more information, call 561/659-8100. The hotel is located at 155 Hammon Ave. in Palm Beach.