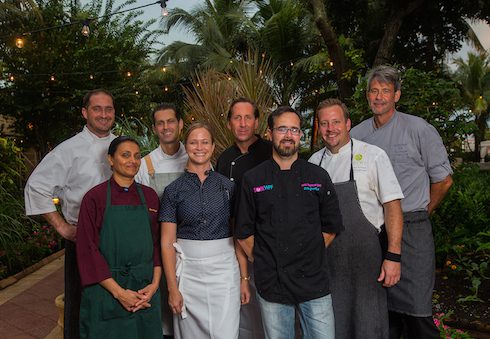 Full disclosure: we attended as guests of the restaurant.

Eight chefs, seven courses and seven wine pairings. If it sounds like a stomach-full, well – it was. By the end of the three-hour Ultimate Chefs Dinner at Bistro Ten Zero One, we were all wined and dined to the max.

“I love getting together with these chefs and working with them, so we’ve been having a blast,” said Max, who’s based out of Boca Raton.

The menu was extensive, ranging from chilled oysters with a pomegranate mignonette to tagliatelle with duck and chicken confit, caramelized cipollini onions, oven-dried tomatoes and baby arugula. And while there were some standout dishes – my favorites were the roasted pumpkin soup shot, edamame hummus (pictured above), umami lobster and togarashi dusted kurobuta pork chop – the event was much more about the experience.

The dinner was set up with communal tables. I went with a friend and we were paired up with two other girls at a booth. The appetizers were passed around by waiters and served at stations on the patio, while the rest of the courses were brought to the table. Every time we tried something new, the four us would jump into a discussion. “What is this?” “Oh, this is so good.” “I’m not sure how I feel about this.” “THERE’S LINDSEY AUTRY!”

It’s an ironic statement, to say that a food event is less about the food and more about the actual events, but imagine the scenario described above repeated for six appetizers, five entrees and a dessert, and you’d understand. There was a lot to compare notes on. Especially since the chefs prepared their food on a long countertop at the back of the room: dinner and a show.

“Every time Dean puts on an event, I try to go out of my way to show up because he always puts on some of the best events,” said Grutka, the man responsible for the lobster dish I mentioned earlier. “I totally enjoyed tonight. I think every chef that was here put out incredible food and the wine pairings were spot on.”

(Speaking of wine pairings, our table couldn’t get enough of the Maschio Prosecco Brut that was served with the appetizers.)

For more events at Bistro Ten Zero One, click here.