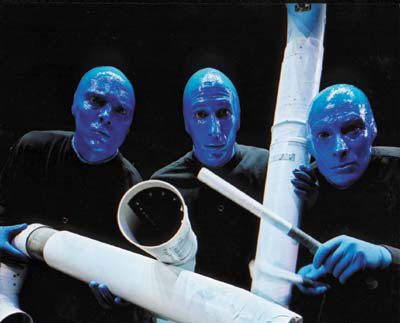 Forget little green men: The Blue Man Group is an alien invasion with genuine rhythm and soul. Conceived in Manhattan in 1987 by a trio of eccentric performance artists, The Blue Man Group has become cross-cultural icons, mounting productions off Broadway and on cruise ships, in Vegas and at Universal Studios Orlando, at opera houses and on “The Tonight Show.” Wherever they land, the basic formula remains the same: Three guys painted a bright cobalt and wearing bald caps, combining wordless comedy, percussive music and technological wizardry into a stage show with more moving parts than a mad scientist’s mousetrap. This brief Miami engagement marks the Group’s first national tour appearance, a collection of newly conceived stunts and favorite numbers from its archive. Expect to see neon light shows, massive inflatables and drums that shoot sparks.

myLIFEspeaks may be the most moving charity you haven’t heard of—or, if you have heard of it, consider yourself ahead of the charitable game. Public speaker Mike Wilson established the nonprofit in the mid-2000s after a visit to Haiti’s New Missions orphanage changed his life. He returned to the country many times with his wife and family, with the goal of raising enough money to build a full campus for the countless orphaned children at New Missions, and what started in the Haitian village of Neply has evolved into an institution serving the needs of abandoned children, with or without special needs, across the globe. Fans of the charity can support the cause at this posh fundraiser at the Addison, which will include a cocktail party, an auction and performances from local country star Amber Leigh (pictured) and a very special, Grammy-winning national recording artist.

What: “Science on Tap”

You could probably guess instinctively that shows like “C.S.I.” sometimes take artistic liberties in their dramatic presentations of crime-scene investigations. Then again, chances are they also get plenty of the details right, if not the overall scope of this sexiest job in the police force. At this special presentation courtesy of the South Florida Science Center—the second in its series of “Science on Tap” events—Cecelia Crouse (pictured), who serves as Crime Laboratory Director for the Palm Beach County Sheriff’s Office, will separate the accurate depictions from the misrepresentations. Her lecture, titled “CSI Effect: Forensic Science, Not Made for TV,” is presented free of charge, but as always, a purchase of a cup of coffee, craft brew or glass of wine from O’Shea’s extensive selection is recommended, as it will get the science juices flowing.

The rubber of religious asceticism meets the road of carnal lust in this rarely performed opera by French composer Jules Massenet. Florida Grand Opera, which last presented Thais in 1976, closes its season of provocative gems with this fable of faith, love and a tragic reversal of roles. Athanael, the purest of a group of Cenobite monks, resolves to travel to Egypt to track down Thais, a courtesan and priestess of Venus, whom he aims to convert to Christianity. Thais acquiesces to the monk’s request, but as they journey together through the harsh desert, he is consumed by a physical love that causes him to repudiate his vows, with tragic results. Elaborate feasts, erotic visions and deathbed confessions punctuate this three-act masterwork, whose challenging title role has, in the past, been played by Renee Fleming. In our production, two sopranos, Eglise Gutierrez and Angela Mortellaro, will share the part in their FGO debuts.

What: Opening night of “Tryst”

Cost: $75, includes reception ($60 all other performances)

You’ll likely recognize the pair of characters in Karoline Leach’s 2006 drama “Tryst,” because both of them are unabashed archetypes: a charming swindler with the nom de plume of “George Love,” who makes his living conning affluent women out of their nest eggs; and a lonely spinster named Adelaide Pinchin who seems like an all-too-enthusiastic mark. The play is set in Edwardian England, with its rich literary history of spinsters and swindlers, and if you think you’ll be one step ahead of this poker-faced satire, think again. Leach designed her dialogue and narrative, with its serpentine twists, as a subversion of its well-trod genre, one that has earned comparisons to the absurdist maestro Eugene Ionesco as well as the more traditionalist master Eugene O’Neill. Considering Palm Beach Dramaworks has enjoyed great success with both Eugenes, expect its production to strike the delicate balance just right. It runs through June 8.

It appears the moral crusaders campaigning against video games as mindless, violent, brain-draining distractions have lost the cultural battle. Last year, the Boca Museum dedicated a successful exhibition to the “Art of Video Games,” and now, with the ongoing success of the touring spectacular “Video Games Live,” these simulated adventures have entered the hallowed halls of classical orchestras and concert stages as well. The show promises audience interaction in its tribute to the music of the world’s most popular video games, performed live by a symphony orchestra and chorus. The gang’s all here: Mario, Zelda, Sonic, Mega Man and Donkey Kong, along with compositions from “Assassin’s Creed,” “Metal Gear Solid,” “Warcraft” and many others, supplemented by lasers, special effects and game images on three massive screens. Hard to complain that Kravis is ignoring young audiences now, isn’t it?

What: Opening night of “Vanya and Sonia and Masha and Spike”

No, it’s not “Bob and Carol and Ted and Alice” redux; this play by absurdist maestro Christopher Durang is a modern narrative inspired by the dramas, and characters, of Russian master Anton Chekhov. In a Chekhovian setting—a cherry orchard in a country house—the unstable relationship between dysfunctional siblings comes to a head. Vanya and Sonia have lived in the lavish estate their entire lives without needing employment; their Hollywood sister Masha pays the bills by starring in vacuous thrillers. But she soon brings news—along a new beau, a thick-headed preener named Spike—that she’s going to sell the house and leave her kin in a lurch. The characters are named from tortured protagonists in the Chekhov canon, but knowledge of the great Ruskie’s work is not required to enjoy Durang’s Tony-winning contemporary spin; though, judging the plot’s wild developments and references, you might want to freshen up on your voodoo, Snow White, Armageddon theories, and Spanish ventriloquist Señor Wences. Prepare for a wild ride. The show runs through June 15.

Some love him, some hate him, and some, like my wife, tend to love his opinions but hate his arrogant demeanor. Others might admire his un-P.C. pugnacity in attacking an issue but generally hate his opinions, which usually—but, significantly, not always—fall on the far left end of our polarized political spectrum. A political commentator known for his controversial musings on religion, marijuana and culture as much as for his skewering of Republican intransigence and Democratic cowardice, Bill Maher was a standup comedian long before he became a fully informed political thinker. But the more informed he’s become, the more his standup has evolved, and he’s easily one of the most coveted comics on the circuit, with material ranging from relationships and pop culture to the news of the day.