Theater Review: “A Funny Thing Happened …” at The Wick 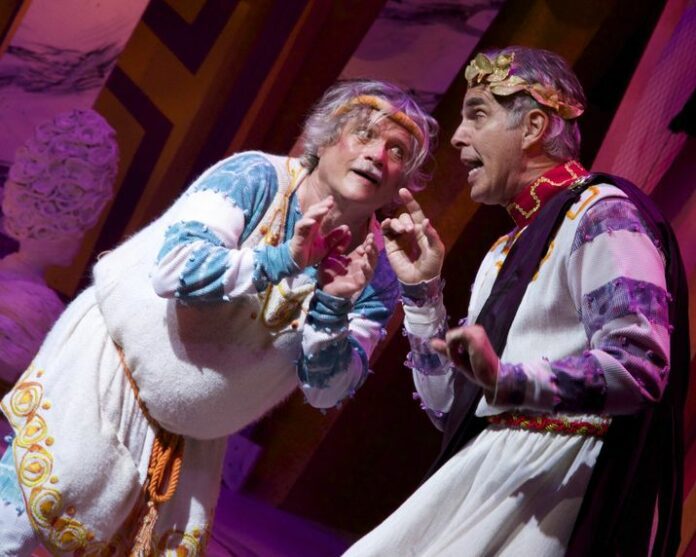 If you are looking to go to a musical that will make you fall out of your seat from laughing, then the Wick Theatre has the show for you.

Originally premiering on Broadway in 1962, Stephen Sondheim’s “A Funny Thing Happened on the Way to the Forum” is a crowd-pleaser that has retained its charm for more than 50 years. Full of puns and mistaken identities, “A Funny Thing…” is lead by Pseudolus (Ken Jennings), a servant for a prominent family, who tries to win his freedom by helping his young master, Hero (Chris Brand), end up with the love of his life, Philia (Whitney Winfield). Unfortunately for Hero, Philia is a courtesan who has already been sold to a soldier (Jim Ballard) who is on his way to retrieve her. There are also multiple subplots throughout the show that all come together in the end, featuring a cast of hilarious characters.

Right from the start, as the cast sings the enduring “Comedy Tonight,” the tone of the show is set. Jennings adds in modern references to Justin Bieber and the Kardashians, and the audience is immediately enthralled. Having appeared in multiple Broadway productions including “Sweeney Todd” (for which he won a Drama Desk Award), “Side Show” and “Urinetown,” Jennings commands the stage. The 68-year-old actor has all of the energy one would expect from someone half his age. While he is onstage, no one has to worry about a dull moment.

Brand and Winfield beautifully play the lovers of the show. Their Act One duet of “Lovely” is just as the title says—and I dare you not to cringe every time someone comes between them. The indefatigable supporting actors Ronen Bay, Brian DiRito and Wesley Slade, who make up the trio of Proteans, are worth a special recognition. They take on multiple roles throughout the show, and they bring laughter each time they grace the stage.

Choreographer Angela Morando has done a spectacular job, as the group numbers are a spectacle to see. When Pseudolus and Hero are trying to find Philia from the house of courtesans, each courtesan has a separate dance routine to reflect her character, and each is fully developed. Between the vitality of Jennings and Morando’s choreography, the show’s energy never wavers.

The first show of the Wick’s second season, “A Funny Thing…” is not to be missed. The combined talent of local and national actors makes for a wonderful show that will have audiences cracking up from start to finish.