Theater Review: “Dames at Sea” at The Wick 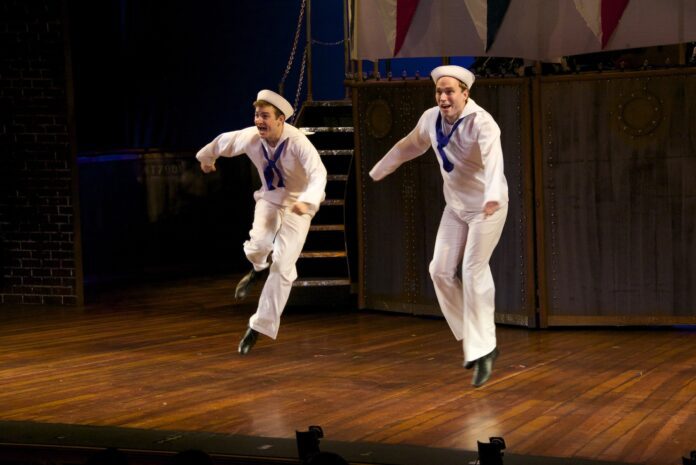 When I saw “Dames at Sea” at the Wick Theatre this past weekend, it came just five days after seeing the disastrous Broadway tour of “Anything Goes” at the Broward Center: Two cornball retro musicals set aboard ships. But the difference is vast and refreshing. The regional “Dames at Sea” is every bit as infectious and streamlined as the national “Anything Goes” was shrill and turgid.

Premiering in 1966 in a tiny off-off-Broadway coffeehouse, “Dames” based its parodic narrative on the splashy, leggy Busby Berkeley movie musicals of the ‘30s, only with a sliver of their resources. The characters are deliberately stereotyped showbiz caricatures—pampered diva Mona Kent (Laura Hodos), brassy chorus girl Joan (Alison McCartan), small-town ingénue Ruby (Lindsey Bethea), the sailor and aspirational songwriter Dick (Alex Jorth), his shore-leave buddy Lucky (Blake Spellacy) and the grouchy, long-suffering theater director Hennesey (Gabriel Zenone). They collide backstage at a 42nd Street theater that just happens to be undergoing a demolition on their opening night, prompting the production to relocate onboard Dick and Lucky’s naval battleship.

“Dames at Sea” is unabashedly insubstantial escapism, the kind that makes the Wick’s previous selections, “Oklahoma!” and “Man of La Mancha,” look like cerebral treatises. But under Michael Ursua’s imaginative and tonally consistent direction, this silly show radiates joy and uplift, simultaneously honoring and superseding its threadbare origins. Angela Morando-Taylor’s minimalistic, tap-driven choreography, performed in Act One in front of nothing by a propless brick wall, is punchy and captivating, while musical director Caryl Fantel, leading her exceptional three-piece band from her perch at the piano, conducts the show’s surprising wealth of styles, from Broadway pomp to ragtime, a Viennese waltz and a Latin-tinged tango.

The cast, absent a weak link, captures the ‘30s-musical ambience while frequently winking at a nonexistent camera. While the men are unassailably solid, there’s a reason the dames share the show’s title: Hodos skillfully milks every comic moment with extended beats and entitled mugging, while an effervescent Bethea imbues her naïve Ruby with big-eyed wonder and a chipmunk squeak. McCartan effortlessly embodies her wisecracking chorus girl, sharing with the equally fleet-footed Spellacy the show’s finest hour, the tap celebration “Choo-Choo Honeymoon.”

Equally inspired is the Wick team’s technical vision, gussying up the show’s coffeehouse austerity with just the right amount of dazzle. A black-and-white credit sequence, echoing the vintage movie nostalgia of “Dames,” opens the production on the Wick’s newly installed projection screen. A shadow play invigorates Mona’s Act One number “That Mister Man of Mine,” and the scenic design for the battleship-set second act features a frontal view of the ship’s deck, complete with three confetti-spewing canons pointing toward the audience and smoke billowing from its twin funnels.

This kind of lavish technical detail likely isn’t new to “Dames at Sea;” after nearly 50 years of small-scale productions, the show finally was scheduled to debut on Broadway last year. That didn’t happen, yet. But after this charming interpretation, who needs Broadway?