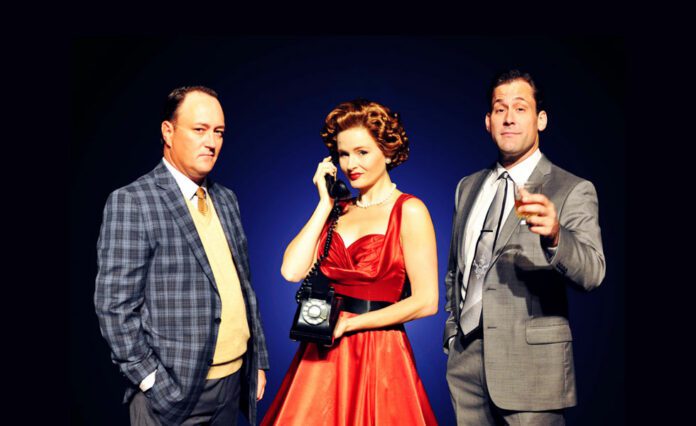 Of all the things Alfred Hitchcock is remembered for, being a great director of actors isn’t one of them. Academy Award-worthy performances rarely emerged from his films; when communicating with actors, he had the bedside manner of a shepherd leading a flock to the slaughter.

Nor was his source material ever anything special; he created his art from disposable dime-store thrillers. The beauty and immortality of Hitch’s movies, then, resided almost wholly in his technique, over which he obsessed: Editing patterns, camera angles and movements, and the placement of objects within the frame outshone concerns over narrative credulity or notions of realistic acting.

This was especially case with 1954’s “Dial M for Murder,” one of his most experimental films, about an ex-tennis star’s botched plan to murder his philandering wife. It was a 3-D movie shot in the interior of somebody’s house, which, even in today’s extradimensionally saturated cinemascape, seems like a wasted innovation. But Hitch used the device as a still-life artist and a voyeur might, planting his poor actors behind table centerpieces and lamps that looked as big as they were, and shooting their nefarious plotting from ceiling-mounted low-angle shots, like a disapproving god.

Or perhaps he chose such a visually disconcerting conceit for this movie because he simply grew bored at the prospect of filming, in a straightforward manner, the long conversations that chewed up so much of its screen time. “Dial M For Murder” was based on a stage play by Frederick Knott, and in its current revival at Maltz Jupiter Theatre, it’s easy to see why a director like Hitchcock might have looked for a visual novelty to resuscitate the moribund text; onstage at the Maltz, without a Hitchcock to tell us how and where to look, this mothballed play betrays its creaky, long-winded origins. Most of the exposition-heavy first act feels eternally lengthy, with just one performance (we’ll get to that soon) able to transcend the stillborn nature of the others.

The usually reliable direction from J. Barry Lewis feels perched awkwardly between two modes – ‘50s movie nostalgia and the desire to update such nostalgia with more realistic acting. Claire Brownell, as Margot, the play’s privileged would-be murder victim; and Jim Ballard, as Max, the suave American with whom she carried on an affair, represent the former approach. Like many a female lead in classic Hollywood pictures, Brownell’s performance is well-coiffed and bloodless, more porcelain doll than human. Ballard, likewise, acts with the studied mien of a dapper leading man of yesteryear, but it’s a shallow glamour – one that never dips below the surface. As for Gregg Weiner, who appears in Act One as Lesgate, the shady criminal blackmailed into murdering Margot, the performance so collapses itself into the scenery that it never registers on any emotional level. By the end of the show, I’d forgot Weiner was in it.

Then there’s the central exception to these performances, one so perceptive and modern that it makes almost everybody else look stranded in a stilted time warp. Todd Allen Durkin plays Tony, the slick moocher whose elegant scheme to take out his wife and collect her generous inheritance unravels, as perfect murders are wont to do. It’s a performance that is alive on so many levels, brimming with subtext. When he unloads on Lesgate about his knowledge of Margot’s affair, he seethes with a mix of righteous anger and quivering fragility, and he achieves the near-impossible task of making us feel sympathy for the biggest scoundrel in the play.

As the murder plot unfurls in the second act, with its patterns of quiet discoveries and investigative dead ends, Durkin absorbs them with a mix of smug satisfaction and barely contained panic; even when he’s not speaking, you can see the gears turning in his head as his character ties himself into ever-more-elaborate pretzels. (It must be said that while Colin McPhillamy, as the inquisitive police officer, is rooted in the same old-movie characterization as most of the cast, he elevates it to a high art, deftly maneuvering around the set with the wry nonchalance of a proto-Columbo).

Lewis even bestows one of the production’s most modernist touches to Durkin, when he has him throw a blanket onto Lesgate’s fresh corpse with the frustration of a disappointed father – a subtle gesture that draws humor from darkness.

Marty Mets’ sound design is an excellent mélange of the clicks and rings of old rotary phones, along with the convincing sound of distant lightning and the nuanced crackle of the onstage fireplace. And Paul Miller’s lighting design is simply ravishing in its cinematic chiaroscuro effects, achieved by gradually dimming the various light sources in the set – the chandeliers, table lamps, floors lamps and wall sconces – and bathing only certain characters in the atmospheric glow.

This is one instance in which movie referentiality works in the production’s favor. Otherwise, with one lead actor performing with a remarkably post-Brando depth of character and the rest of them embalmed in the decaying reels of a prior generation of acting, it’s hard to know exactly what this “Dial M” is trying to be: homage or update. Like the old-timey radio onstage, it can sometimes be stuck between stations.