Theater Review: “I and You” at Arts Garage 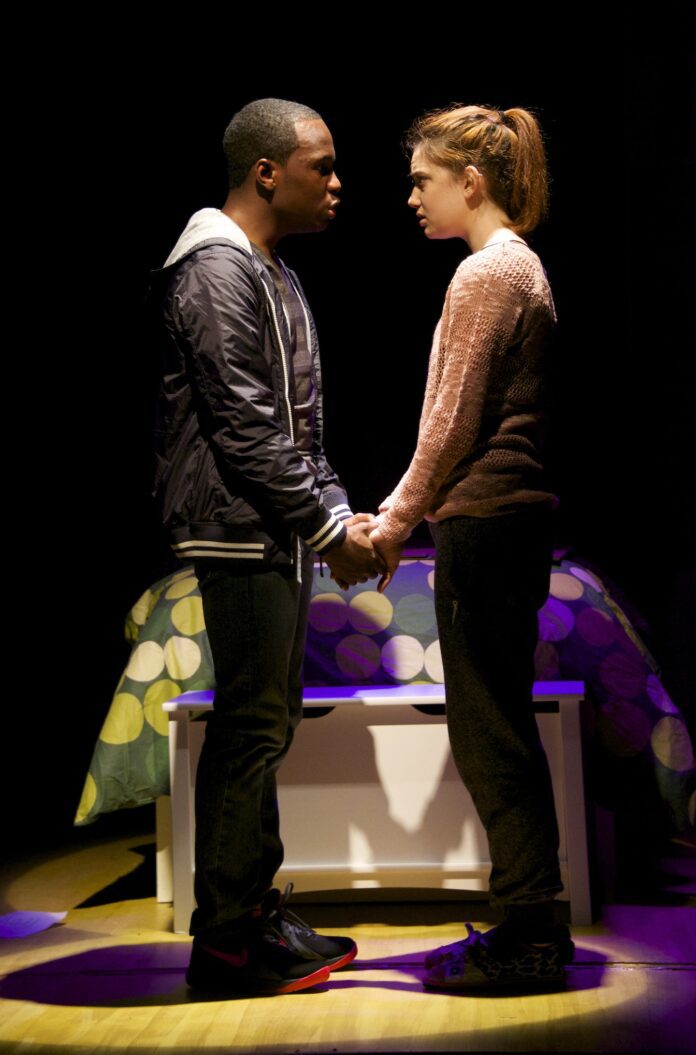 Lauren Gunderson’s “I and You” is a two-character play, but for all intents and purposes, it’s a triangle involving a third, unseen character who’s been dead for 122 years. That would be Walt Whitman, the renegade poet, whose lyrical words color the play’s action, adding brighter hues to an already vibrant canvas.

Running through Feb. 8 at the Theatre at Arts Garage, the play is set in the upstairs bedroom of Caroline (Gracie Winchester), a terminally ill teenager who has had to virtually withdraw from school for medical reasons. As the play opens, an unexpected visitor materializes: It’s Anthony (Terry Guest), a schoolmate she’s never met, and he’s quoting from Whitman’s Leaves of Grass. He’s partially completed a class project on Whitman, shoddily arranged on posterboard, and of everyone in the class, he selected her as his partner. Did he mention it’s due tomorrow?

Caroline is immediately hostile toward the invader holding the dog-eared poetry collection, the chicken-scratch posterboard and the peace offering of waffle fries, because after all, why is he here? She doesn’t go to school any longer, and why would she be interested in some old dead poet?

She’ll have the next hour and a half to come around, and hearing Whitman’s words read by these fine young actors, it would be hard for anyone not to. In its most thrilling sections, “I and You” is a work of admirable literary criticism, looking afresh at Whitman through the perceived eyes of 21st century high schoolers, from Anthony’s persuasive passion to Caroline’s gradually budding interest. Through the prism of Whitman, these carefully chosen opposites—in race, gender, health, upbringing and world view—spin off into conversational waters both shallow and deep, from tastes in music to confrontations of mortality, which both have faced. It all leads toward a surprise ending that throws everything you’ve seen into an elusive tailspin.

For a play about a sick teen, “I and You” is buoyantly funny, because Gunderson and director Lou Tyrell possess an innate understanding of the diction and syntax of young people—of their ability to dance around sensitive subjects one moment, and speak with uncouth bluntness and linguistic brinkmanship the next. Even their complements sound like resentful insults. The characters talk with an abundance of unnecessary “like”s and say things such as, “That’s what you get for homework-bombing a sick girl” and “When everybody’s so nice, nice is fake.” They are both wise beyond their years and full of contradictions; Gunderson has gifted these actors with parts that frequently defy cookie-cutter reductionism.

Winchester and Guest are mostly right on; the former could dial back some of the fury in the opening moments, when the level of hostility doesn’t always ring true, and the latter stumbled more than once over some lines last weekend. But once they find their groove, their chemistry is palpable, the sexual tension thick as frozen cake. Tyrell’s direction is punctuated by deft touches skillfully translated, like the way Winchester first handles Leaves of Grass like it’s a dead animal she’s forced to carry to the garbage, or her uncomfortable—yet possibly exciting—shift in body position when Guest first sidles up to her on the cozy trunk at the foot of her bed. Tyrell contracts the space with deliberate slowness, bringing them ever closer together just as their Whitman project draws to a revelatory finish.

Robert F. Wolin’s scenic design is an IKEA showroom par excellence, a densely propped adolescent shrine neatly organized in a boxy green shelf unit: Twilightbooks, board games, color-coded trinkets, photography equipment, stuffed animals that may or may not be sentimental remnants of childhood. There are laptops and iPhones, too, but they’re visibly powered off even when the characters use them, which is one of the show’s few dramaturgical oversights.

If the set seems a little too immaculate, well—there’s a reason for it. You’ll have to wait for the mystical climax to put all the pieces together, and it’s a heck of an effective twist, one that addresses the transcendent deathlessness of Whitman’s text as much as the characters’ own mysteries. It’s poetry in motion.