Theater Review: “Once” at Broward Center 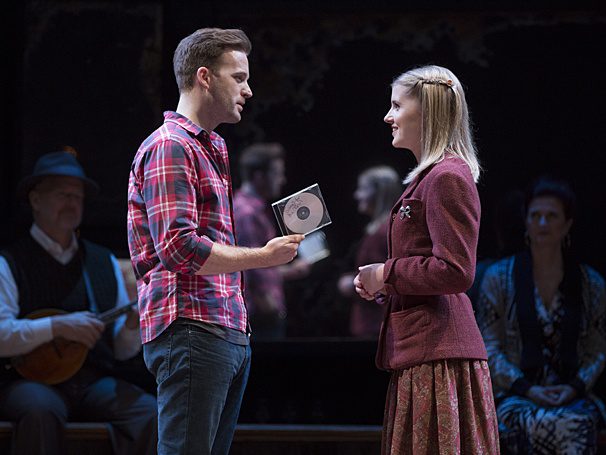 Every so often a show comes along that challenges the accepted conventions of theater. There’s something so different about it that it creates an experience that you won’t soon forget. “Once” is exactly that show.

Currently touring at the Broward Center, the Dublin-set musical follows the story of an Irish guy (Stuart Ward) and a Czech girl (Dani de Waal) who meet and slowly change each other’s lives. After hearing his music about an ex-girlfriend that moved to New York, the girl decides that the guy’s songs must make it to his ex. Together, the guy and girl, whose names are never mentioned, are able to create a band and record demos of his music.

Those looking for a typical love story will be left wanting more, as the story does not end in the way most love stories do. But this show, which is adapted from an Oscar-winning 2007 film, has so much heart that you won’t be disappointed.

What makes the show so different is the staging. The set, a pub in Dublin, never changes, and only set pieces are moved to reflect different locations. The cast moves the set pieces in time to the music as the change occurs. Their choreography is so fluid that the scenic changes are often as entertaining as the scenes themselves.

Taking on a third duty, each member of the company plays a different instrument on either side of the stage when not in a scene. In doing so, they rarely leave the stage. Their instruments become so much a part of them that watching them perform increases your affection for theirs character.

Ward and de Waal captivate the audience with their charm and talent. While at times Ward’s voice overpowers de Waal’s, the two create a storyline that makes you root for their characters to end up together. The timing of their jokes, their instrumental skills and dedication to the characters is stunning.

If you have ever been to Dublin, this show will create intense nostalgia. It honestly feels like you could’ve walked into any pub in the city center and would be seeing these scenes happen. The characters speak of Cork and Grafton Street, two popular locations in Ireland, and if you’ve been there, you will understand the humor.

After having traveled abroad to Ireland a year and a half ago, I appreciated the amount of Irish influences in the show. The music has a beautiful Gaelic feel to it, and the humor is true to what you experience over there.

It’s clear why this show won eight Tony awards when it opened on Broadway and stayed there for almost three years. It’s heart-wrenching, beautiful and a good time.

On a side note, be sure to arrive early. Before the show and during intermission, audience members in the orchestra seats are welcomed to hang out onstage and buy drinks from the bar of the pub. They offer a few choices of wine, beer and liquor as well as bottled water. While the audience is up onstage, members of the cast join them for a pre-show jam session.