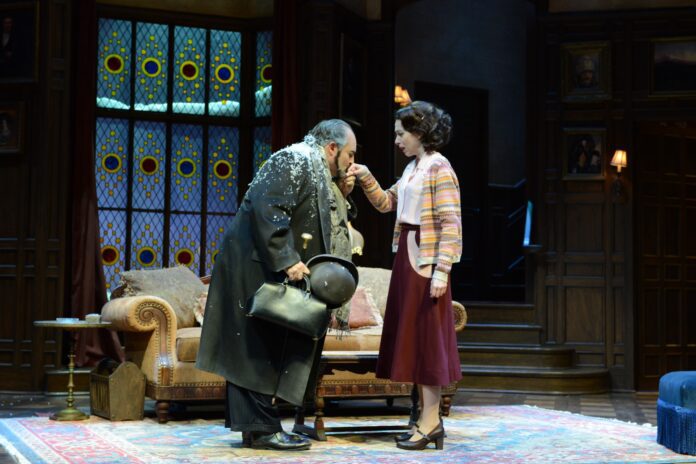 Audiences in London’s West End are either remarkably compliant of Agatha Christie’s wish keep the ending of her play “The Mousetrap” a secret, or they just don’t care about spoilers. For whatever the reason, this boilerplate mystery—with its Victorian-style manor house, its murderer on the loose, its gaggle of outsized characters with convincing motives, its cunning and relentless policeman—has achieved the world record for the longest continuous production in theatre history. It opened in 1952 and has since exceeded 25,000 performances.

Yet on regional stages on this side of the pond, “The Mousetrap” is produced so infrequently that many local theatergoers (myself included) have never seen it performed. The Maltz Jupiter Theatre specializes in revisiting these kinds of shows—vintage chestnuts vividly realized by a peerless design team—especially in its season-opening slot in late October. The company’s recent productions of “Dial M for Murder” and “The Foreigner” were like antique armchairs lovingly restored, and so it is with Christie’s durable whodunit, another play whose share of problems melt away like so many of the snowflakes swirling outside the manor window in Maltz’s capable hands.

The production’s stellar attributes greet audiences before the first line is spoken. If not quite as jaw-dropping as its “Other Desert Cities” or “Foreigner” sets, Michael Schweikardt’s scenic design is perfect for “The Mousetrap,” a towering and uncluttered guesthouse living room with churchy plate-glass windows dividing its symmetrical halves. Snow falls and collects on its outdoor ledges, and when a character opens the front door, wind rustles the curtains just so. By the time the set’s myriad lighting fixtures cast their subtle glow and the old-time desk radio on stage-left broadcasts an accurately scratchy news report about a London murder, the foundations of authenticity are set for stimulating evening of mirth and mayhem.

The manor is operated by Mollie and Giles Ralston (Katherine Amadeo and Eric Parks), a newly minted married couple who have just, on this day, opened their manse as a guesthouse. Their tenants arrive one by one, each of them beating a snowstorm that will soon render the roads unnavigable, and trap them (like mice?) in the house.

They are, in order of appearance, the eccentric dervish Christopher Wren (Richard Iverson); the retired judge and snooty battle-ax Mrs. Boyle (Barbara Bradshaw); Major Metcalf, a laconic military man who keeps to himself (Barry Tarallo); Miss Casewell, a Machiavellian woman with the dress and mannerisms of a man (Gail Rastorfer); and a surprise visitor, the hulking Mr. Paravicini (Roland Rusinek), who claims to have escaped his upturned car for the refuge of the manor.

As one character puts in, every guest is either “unpleasant or odd,” which ensures that these archetypes fit snugly into the colorful murder mystery like cogs in a widget. A character is slain in darkness at the end of Act One, and all of them, at one time or another—including Mollie and Giles—makes portentous, damning statements that potentially incriminate themselves (Christian Pedersen plays the officer who gradually prods it out of them).

In a good production of “The Mousetrap,” you’ll have your assumptions of the murderer’s identity repeatedly questioned by new revelations, offered by the actors’ movements as well as the script’s words. This is a play that demands a careful, widescreen appraisal of the mise-en-scene. What does it mean that this character dropped his fireplace poker at that time? What’s with the glove Giles discovers, and what’s the object inside it? Is it just a coincidence that a certain character positioned himself near the telephone shortly before the line went dead?

The best compliment of Peter Amster’s invisible direction is that he draws just enough attention to such evidence without battering us with it (well, mostly). His “Mousetrap” really feels alive as a theater piece, not a staged book: His pacing is loose-limbed, freewheeling and devoid of the clunky mechanisms that could hamper a work of such writerly calculation.

The standout of the well-curated cast is Iverson, who brings a veddy British, “Fawlty Towers” sense of physical comedy to his Christopher Wren, an irrepressible chatterbox who, more than any other actor, makes Schweikhardt’s set his home: His choices are always spot-on, and they bring an air of improvisation to a work that could otherwise feel sculpted.

Bradshaw is convincingly shrewish as the entitled grande dame of this strange box of crayons, and Parks hits all the right notes as the manor’s seemingly all-too-straightforward co-proprietor. As Mollie, Amadeo feigns concern about the evening’s meals over its murder, channeling a waifish naivety about the proceedings that may be a cover-up. Rastorfer is an ice-veined, intimidatingly cool Casewell, and Pedersen’s police sergeant skillfully balances a mix of backstory and narrative progression.

Rusinek’s Paravicini is the role that might well divide audiences. He emerges from the snow like a chalk-white Satan, laughing like a cartoon villain and speaking with the orotund ham of Orson Welles in his twilight years. The performance is the show’s most over-the-top, the only one to descend into parody—a questionable directorial decision that, for this critic at least, missed the mark.

By the time the climactic twist reveals itself, you’ll be genuinely hoodwinked, a testament to “The Mousetrap’s” timeless strengths. Piece the revelation backward, and the logic doesn’t quite cohere, but if anything, it makes you want to see the production again, watching each narrative brick pile precariously atop one another, with full knowledge of the building’s final design—even if it might be full of holes.