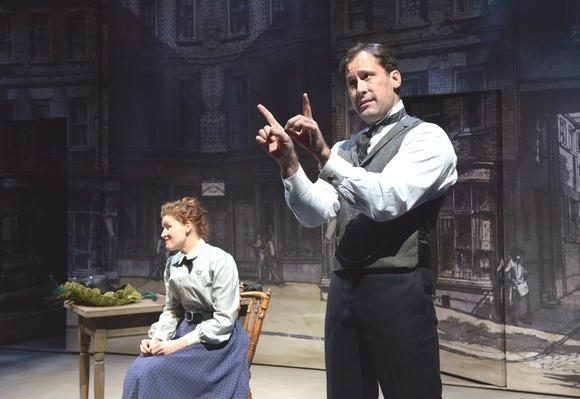 Local actor Jim Ballard often finds himself cast in period pieces, because his natural look is ageless: Tall, dark and handsome, he resembles a matinee idol from the ‘40s, the kind whose comfort zone could easily encompass a commanding president, a rakish private eye and a soap opera patriarch.

His casting as George Love, a predatory confidence man in Dramaworks’ intimate two-hander “Tryst,” reveals an untapped side of Ballard. He’s played morally questionable characters before, but even in a play like “Doubt” at the Maltz, there’s, you know, doubt surrounding his guilt. He has not, to my knowledge, played such a full-blown sociopath until now, and it fits his suave, chiseled features well. He frequently subverts his natural charm, suckering in his audience as much as his onstage mark before plunging his metaphoric knife into both.

Written by British playwright Karoline Leach and closing Dramaworks’ 2013-2014 season, “Tryst” is set in early 20th century England. Character introductions are dispensed early and self-reflexively, with each explaining his or her life choices and motivations to the audience: Adelaide Pynchon (Claire Brownell) is a lonely spinster and milliner, the very picture of fretful, innocent naivety, while Ballard’s George is the very picture of vulturine avarice. Adelaide has a nice nest egg she’s been patiently sitting on, waiting for a reason to spend it; George is penniless and on the prowl, looking for a woman like Adelaide to woo, take her money and run—his longstanding m.o. Director J. Barry Lewis establishes the power dynamic before these characters meet by having Brownell discuss her life in a sitting position and having Ballard pace behind her, a shark deliberating over his next meal.

And so they meet, by forced happenstance on George’s part, in the shop where Adelaide alters designer hats. He humbles the skittish Adelaide, planting seeds of affection and continuing to grow them over the next couple of days in a whirlwind romance that seems to be going, for George, exactly as planned. He invents an exotic persona for himself, as a world-traveled, multilingual former diplomat and spy, and she takes his bait, grateful for the sudden attention. They prepare their marriage document, Adelaide’s checkbook in hand.

Truth be told, the first act of “Tryst” doesn’t move like gangbusters. Its pacing is methodical and elliptical, in a sense going through predictable motions, with neither character wavering from his or her time-tested archetype (aside from occasional moments from Brownell, whose performance seems to pick up on a subtext of foul play from her suitor). The actors keep it engaging enough, but we’re waiting for some sort of shoe to drop, and Leach takes a while to drop it.

The second act is another story, a dramatic seesaw of revelations, backtracks, denials, confessions, and tears that pushes both actors to emotional extremes, and it’s here that “Tryst” really hits its stride. Ballard magnificently manipulates everyone like Silly Putty, to the point where George’s lies and the truth become indistinguishable. Adelaide finally grows a spine, and it’s wonderful to watch Brownell connect a few of the most glaring dots, her face a rotating register of regret, anger and hope. In the process, Brownell almost seems to change physically during the revelatory second act, her character graduating from mousy target to cunning archer.

It’s a delight to watch both of these intelligent actors work their way through Leach’s delicate labyrinth, and a credit goes to Lewis for casting the right people for such taxing parts; there’s rarely a moment when both are not onstage. Jeff Modereger’s scenic design is low-key (for Dramaworks, anyway), a set of rotating panels of Edwardian-era storefronts and minimalist furniture props efficiently shuffled in and out by Dramaworks’ speedy stagehands. Don Thomas’ lighting and Rich Szczublewski’s sound design—creating the auditory ambience of carriage wheels and horses’ hooves, birds’ tweets and train whistles—have an understated grace that never call attention to themselves. Brian O’Keefe has once again tailored period-perfect costumes that reflect each character’s personality.

But the show’s most resonant takeaway is Ballard’s performance. He’s so good in generally everything he’s ever appeared that it’s a frequent surprise when his name doesn’t wind up on enough award ballots at the end of the year; his reliability is almost taken for granted. But if his unshakeable work in this show is any indication, he may have found an award-worthy nook as a psychopath.