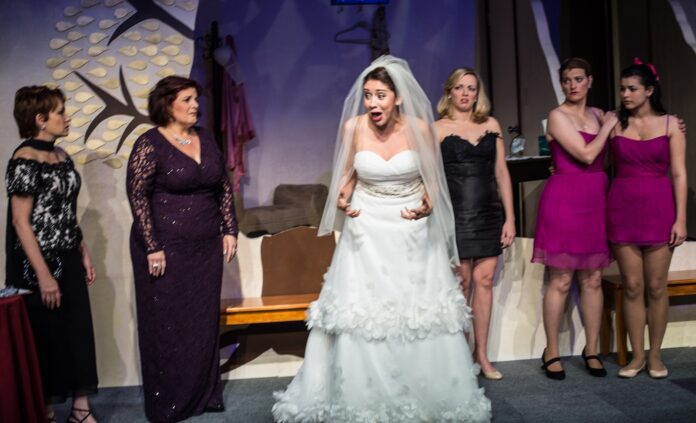 Playwright Holly Arsenault created something new with her debut work “Undo”—an ensemble divorce dramedy. In the imagined premise of Arsenault’s play, divorce isn’t a matter of privately signing papers and either grieving a shattered union or celebrating its finality. It becomes a sort of public shaming, a ritual involving not just the troubled couple but everyone who attended the wedding in the first place.

In Arsenault’s world, those seeking a divorce must literally go through the motions of their wedding again, as an emotional marathon to test their resolve. Family members dress the same, take back their wedding gifts and bring along the same guests (even if they’ve since broken up with them), while the unhappy bride and groom reenact such traditions as the couple’s dance, the sanctifying kiss, and the bouquet toss. The idea is that, through this painstaking process, they’ll know if they really want to go through with the divorce.

It’s a farfetched idea, but the theatre is full of unorthodox concepts that, with the right cast and director, can intellectually and emotionally persuade us. In its southeastern premiere from Boca Raton’s Parade Productions, we never quite buy it for the simple reason that, with some notable exceptions, the cast doesn’t gel, and it doesn’t seem to buy it either.

At the nominal center of the play are Rachel (Gladys Ramirez) and Joe (Ben Sandomir), the couple untying their knot, for reasons that may or may not have to do with infidelity and/or clandestine medical procedures. To make matters worse, Joe’s father Abe (Michael Gioia) lost his wife two days earlier from a lengthy terminal illness, and his flame from the ‘70s (Candace Caplan) has arrived to reawaken complicated emotions.

There’s also Rachel’s teenage sister Naomi (Mariah Telesca) and older sister Hannah (Jennipher Murphy), who has brought her Irish girlfriend Siobhan (Jeanine Gangloff) along, to the discomfort of her traditional Jewish mother Joan (Margot Moreland). Completing the cast are Ari (Todd Bruno), Joe’s promiscuous best man, and Melita (Ann Marie Olson), Ari’s ex-girlfriend, who is present only for the time it takes to undo the wedding.

This is a lot of characters—too many for both Arsenault and director Kim St. Leon to fully explore in a two-hour play. In the opening scene, as Hozier’s melancholic fist-pumper “Take Me to Church” sets the tone, Joe and Rachel prepare for the ceremony in separate, elevated rooms, while the outside world bustles with wordless activity below them. It resembles the introductory bustle of a large-scale musical, an energy the show does not sustain.

The more it progresses, the more “Undo” becomes a rote procession of static two-character scenes, as the supporting players, fuelled by too much booze, reveal regrets and longings to convenient strangers. The theme of forgiveness, or lack thereof, connects just about everybody, in the triple-underlined, Cliff’s Notes manner of a first play, which, for Arsenault, it is.

Making matters less palatable is St. Leon’s wildly uneven ensemble, whose lack of togetherness hampers the flow of the action. On the plus side, there’s Bruno, whose uncouth Ari agreeably channels Charlie Sheen, and whose comic relief always hits the mark; Telesca, a college sophomore who believably inhabits the skin of a 14-year-old girl; Ramirez, who captures the conflicting emotions and abject pain of the ceremony better than anyone else onstage; and Moreland and Olson, two pros who can always be counted on to elevate the work of those around them.

And some need that elevation. Murphy and Gangloff couldn’t have less chemistry as a same-sex couple, and the latter struggles so visibly with her character’s Irish accent that we don’t see Siobhan—only the deliberate wheels of the acting process spinning in Gangloff’s head.

Elsewhere, there’s a reason Gioia’s Abe seems emotionally disconnected from his wife’s passing, but his performance is more bland than detached, and starves for the complexity required of what becomes a pivotal role. As Joe, Sandomir is fine, but his desperate passion for preserving his marriage doesn’t equal Ramirez’s tortured determination to end it.

Even Josh Aune’s clever, 3D set design runs into some staging problems, as the platform outside Joe and Rachel’s dressing rooms becomes muddled, confusing indoor reception halls with outdoor space. Microphone and other sound problems didn’t help things during last night’s show, but the issues here are more endemic. “Undo” is a play that is overlong to begin with, and while this ploddingly directed production has its virtues, it suffers a flaw most fatal: We don’t care about what happens to the characters.