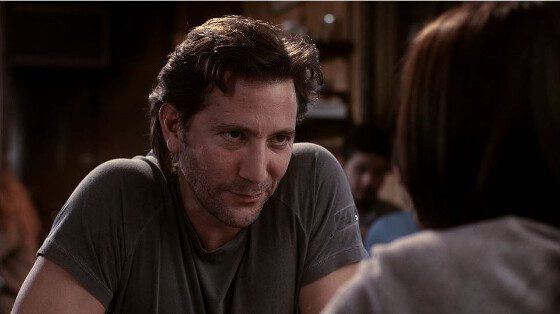 The 19th annual Palm Beach International Film Festival opened last night and runs through April 10 at four Palm Beach County theaters. Tickets run $10.50 per screening, and the lineup is eclectic as always. Here’s a look at three the films I had a chance to view in advance. For the complete lineup and to purchase tickets, visit pbifilmfest.org.

Fiction may or may not be more authentic than the truth in “Girl on the Train,” a heady, slippery and thoroughly entertaining neo-noir from the low-budget thriller director Larry Brand. Henry Ian Cusick, of “Lost,” plays Danny, a filmmaker whose video camera is like a fifth appendage. He catches a glimpse of an attractive young woman (Nicki Aycox) crying on a train, and strikes up a conversation that will lead, we soon learn, to a bandaged hand and a police station, where he’s being interrogated by a perceptive detective (Stephen Lang, of “Avatar”). Brand’s screenplay jumps back and forth from his encounters with the woman—who is named Lexi, and who reappears all too conveniently in Danny’s life, with an offer he can’t, or won’t, refuse—and the present police investigation. Some of Brand’s dialogue sounds too perfect, too loaded with hidden meaning, to feel real; but then again, so did the screenplays of most of the great films by Hitchcock, whose preoccupation with the mystery and romance of train travel Brand shares.

But the film’s structure is sound and always compelling, with enough twists to surprise us and not so many that the narrative would crumble under a mountain of implausible revelations. Its balance is just right. Brand is especially deft at peppering “Girl on the Train” with omens, coincidences and unlikely synchronicities, which keep both Danny and us on our toes; of particular interest is the film Danny is making while he’s busy becoming Play-Doh for Lexi. It’s a documentary about a Holocaust survivor who shares his story about receiving a Christian icon from a mysterious girl on a train, in a chance meeting that forever changes his life. It’s a wonderful subplot in its own right, while saving a brilliant punch line for the end. “Girl on a Train” is not without occasional pretentions, but it successfully invigorates a familiar genre with surprisingly weighty philosophical detours that contrast, as Danny puts it, the “purity of imagination” versus “the spectacle of flesh and sorrow.”

“The Girl on the Train” screens at 6:45 p.m. April 8 at Muvico Parisian in West Palm Beach.

“Mary Loss of Soul,” the debut feature from writer-director Jennifer B. White, is a leisurely supernatural thriller that doesn’t begin to discover its identity until the climactic scenes. During a vacation at her family’s lake house, normally cheerful 15-year-old Mary Solis (Kaylee Bryant), an aspiring dancer and ornithologist, disappears for several hours. When she turns up, she had no memory of the lost time, and she appears clinically depressed. “I don’t know” is her answer to everything, and her mopey demeanor is, frankly, not unlike a lot of lethargic adolescents. Alas, traditional medicine doesn’t work, and, after an apparition that looks like Mary begins haunting their home, her mother Gina (Catherine Black) decides to look into alternative healing methods, like shamanism and soul retrieval.

The movie’s ideas sound promising, but the execution is meandering and shapeless. The opening scenes feel so much like a sitcom that many of the lines seem tailored for laugh tracks, and then it switches gears toward dewy-eyed sentimentality. The movie takes an awfully long time to negotiate its horror-movie intentions, and when paranormal activity does strike the Solis household, the special effects are so crude that it often comes across as comedic self-parody.

Despite an overreliance on softening fades to transition scenes—where cuts would be more immediate—the movie’s structure still lurch awkwardly from one scene to the next, and it doesn’t gain syntactical fluidity until the end. Add to this the overblown performance of the father (Jose Zuniga), psychiatrists who don’t act like psychiatrists, cops who don’t act like cops, and a mawkish score poured like syrup over the action, and you’ve got a film that doesn’t exist in any recognizable reality—not this side or the Other.

“Mary Loss of Soul” screens at 6:45 p.m. Saturday at Muvico Parisian 20 at CityPlace.

Saving the best for last—at least of the three films I had a chance to see—“Natan” is an illuminating documentary that should appeal equally to cineastes and Jewish activists, because both groups will find it enraging and heartbreaking. Told with a mix of newly written voice-overs, interviews in French and English, and haunting visuals both archival and newly constructed, the movie charts the rise and fall of Bernard Natan, a disgraced footnote in French cinema history who, the directors of this film argue, deserves a theoretical retrial.

A Romanian Jew who emigrated to France just as Georges Melies’ science-fiction spectaculars were being recognized globally, Natan helped make France’s movie industry the envy of the cinematic world. A producer of boundless ambition, he soon acquired the legendary movie studio Pathe, where he helped bring sound and color to the burgeoning industry. He experimented with widescreen photography decades before its formal development in 1950s Hollywood, and, back in 1924, he even created the first “bonus feature”—a behind-the-scenes look at the making of a silent film, more than 70 years before the invention of the DVD.

But soon enough, his Jewish background resurfaced (he was born Natan Tannenzaft). It wasn’t long before charges of fraud (which this film’s directors, Paul Duane and David Cairns, dismiss) and a fascist propaganda campaign led to his denaturalization from France and ultimately his deportation to Auschwitz, and you can fill in the rest of his abbreviated biography.

Yet after his death, thanks to the help of film restoration, the Bernard Natan story got weirder, with the 1996 accusation that Natan acted in, and directed, the earliest pornographic films in history, which were uncredited. While Duane and Cairns are undoubtedly in Natan’s camp throughout this movie, they’re more equivocal on this point, presenting side-by-side footage of Natan with the proto-porn actor in question. The similarities are sometimes jarring, other times ludicrous. We may never know the truth, but even if he was a pornographer, nobody could argue that his punishment fit the “crime,” and that’s the tragic rub of the man’s story. “Natan” runs just 65 minutes, but the film is outsized in its poignancy and pathos.