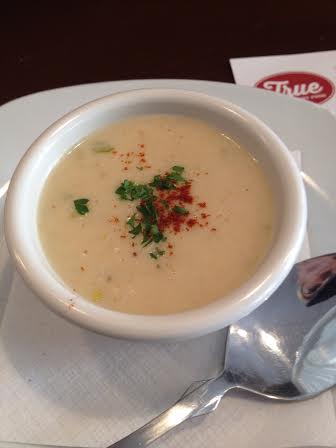 Baltimore native Frank Hawkins has left the frigid land of the Orioles and The Wire and is bringing a taste of his hometown to the balmier climes of SoFla at his newly opened True Boca Raton (147 SE 1st Ave., 561/417-5100).

Billing itself a purveyor of “good, honest food,” True takes over the old Apropro Kafe spot behind Chops Lobster Bar. It’s a stylishly modest space marked by a pleasant outdoor patio fronting a small fountain, which if it was in Baltimore right now would probably be covered with snow.

But though you won’t be tasting any Baltimore weather, you can taste chef-owner Hawkins’ Charm City-inspired menu, featuring—not unexpectedly—the area’s exquisite blue crab, either in sherry-spiked cream of crab soup or golden crabcakes seasoned with Old Bay. The modestly priced menu also offers brisket sliders, roasted chicken with caramelized shallots and vegetarian lasagna, along with a roster of daily blackboard specials.

The selection of wine and beer is considerably more eclectic, with the former focusing on boutique vintners from around Europe and the latter on craft brews from East Coast breweries. True is open Tuesday through Saturday for lunch and dinner.