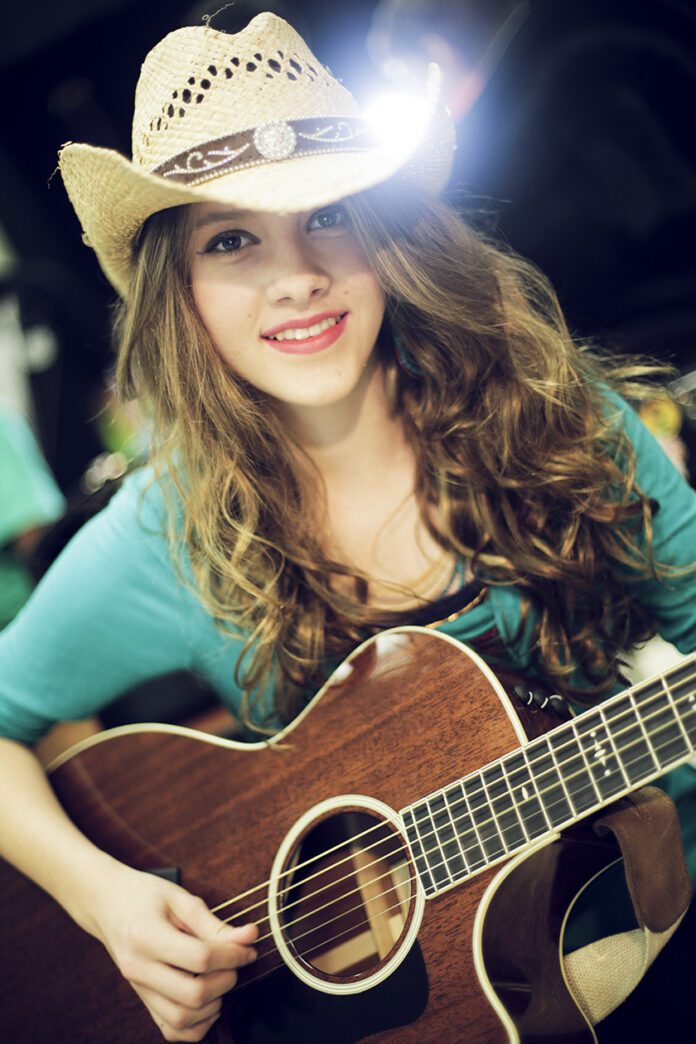 Boca Raton readers first met Maggie Baugh in the March/April 2014 issue; at the time, the aspiring country music singer was still in middle school. Since then, the now-sophomore at Boca Raton High School has shown the work ethic of an established musician, playing her fiddle and guitar at some 80-plus gigs per year. The diligence has paid dividends; at age 15, Baugh’s star is rising. She recently released an album of seven original songs, “Heck of a Story,” as well as a video of the first track, “Midnight Muddin.”

Here is an excerpt from John Thomason’s March/April 2014 story on Baugh:

Maggie Baugh has had music in her blood for the past 11 years.

“I asked to play the violin at 2, but my parents said no,” Baugh recalls. “So I asked again when I was 6, and I’ve now been playing for seven years.” After starting on the fiddle, she migrated to the guitar.

“The first reaction, as a parent, is, is it a hobby or is it just a phase? When does it stop?” says Maggie’s mother, Alyson, about her daughter’s prodigious talent. “But as we go into the second year of her songwriting, it’s just who she is. You support what your child has a dream to do. Until it stops, you keep supporting it.”

Baugh doesn’t expect it to stop. Since her 2011 debut at a singer-songwriter showcase at the Broward Center, she’s performed everywhere from Kevro’s in Delray Beach to the Tri-Rail Airport Station in Dania Beach to the Fraternal Order of Police in West Palm Beach. Baugh has played fairs and festivals, schools and fundraisers, coffeehouses and boat parades and birthday parties, some 60 performances in 2013 alone—anywhere to get her name out there, except, for obvious reasons, nightclubs. Also, she doesn’t perform on school nights.

Her ultimate dream is to play to a sold-out crowd at the Grand Ole Opry, a venue she’s already visited, like a star-struck congregant in the church of Country.

“Country is so down to earth; the music is so true to yourself,” Baugh says. “Instead of talking about getting drunk and going to a bar and meeting girls, you sing about home and family, and it has a great beat and pulls you in.”