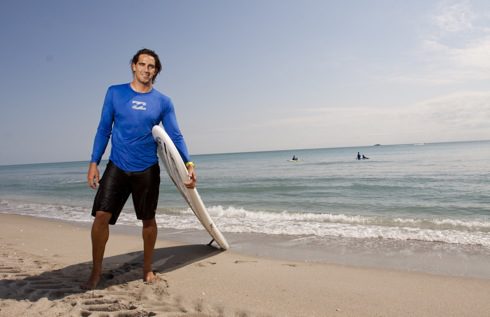 Morgan Baer, born in Rockledge, near Cocoa Beach, comes by his love of the ocean naturally; his mother bought her first skateboard as a kid at Nomad Surf Shop near Briny Breezes, and his father got a degree in oceanography. He learned to swim at 6 and surf at 11; he swam competitively until he was 19, when he and his dad launched his career with a surf shop in Manalapan called Coastal Surf and Ski in 2003.

The surf shop closed in 2009, and last year Baer, 31, and his current company,Costa del Este Water Sports, teamed up with The Boca Raton Resort & Club to run the resort’s water concessions—and start a surf school. Baer’s company offers everything from SUPs to Hobie Cats to Jet Skis and banana boat rentals—but it’s the surf lessons that are closest to his heart. He’s looking forward to the Resort’s new Flo-Rider pool, and to a great summer. “The members have embraced us, and it’s been really fun,” he says.

We asked Baer to give us a few tips on surfing—and the Salt Life.

• “Anyone can surf. There are different sized boards for different levels, and you cater to the individual—it’s all about confidence. We want everyone to have the experience of standing up.”

• “Starting out, you should take at least one lesson. Go to a surf shop; get to know the area, where the best surf is. You need to have the right equipment, the right knowledge on where to go and where not to go. And stay in front of the lifeguards.”

• “The secret to getting the hang of it is having a nice core balance. A lot of the younger generation is picking that up fast these days because they do a lot of skateboarding. Left foot forward or right foot forward. They are snowboarding more than skiing now.”

• “The perfect wave means very little wind on the water, and you want to see a nice line across the water—a little bit of white water and the rest smooth. The smoother the ocean looks with waves coming in, the more likely the better day of surfing.”

• “The most important thing to watch out for is other surfers. [The wave belongs to] the first person on the wave or the person closest to the peak of the wave. If you are learning, you should stay off to the side, the shoulder. Don’t go straight to where everybody is. Everyone thinks that will be the best spot and that everybody will be nice out there, but we get very few good waves here, and there is a pecking order when you get into the ocean. There are guys out there who have put in their time, and they expect you to understand that.”

• “Be aware of sea life—this time of year is our shark season. To be honest, it’s a lot more hyped than it needs to be, and it’s unfortunate. It’s very difficult to get close to them, but good luck telling someone from Ohio that the sharks are OK.”

• “[Delray Beach has great surf] on a refraction swell, a swell with a strong west wind coming through for 24 hours, and a big Gulf Stream. It’s called a Delray Window—an unbelievably fun wave. It happens as a cold front comes through, about three or four times a year.”