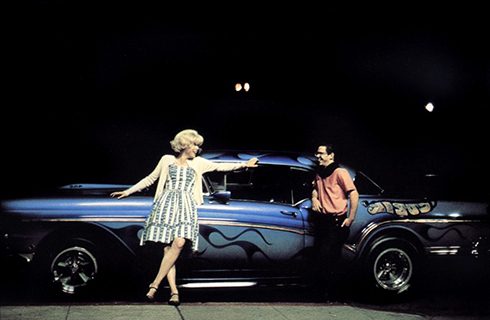 Cars and movies have enjoyed an everlasting love affair. As a complement to our July-August feature on three local drive-in movie theaters, here are my top 10 favorite films set in, or concerning, automobiles.

10. American Graffiti: Teenagers come of age in George Lucas’ period dramedy, set on the cusp of the Kennedy Assassination and in the waning hours of the postwar boom. Their crises, revelations and goose chases take place from inside their cars, however, and vintage automobile enthusiasts revisit the film as much for its mechanical characters—the 1958 Chevy Impala and the 1956 Ford Thunderbird—as for its human ones.

9. Talladega Nights: This hilarious satire of NASCAR culture somehow manages to win over both the sport’s detractors and its fanatics, perhaps for different reasons. In addition to creating signature roles for Will Ferrell, John C. Reilly and Sacha Baron Cohen, the movie provided cameos by real-life NASCAR personalities and cars. A Porsche Cayenne, outfitted with camera mounts on all four corners, was responsible for much of its dramatic cinematography.

8. Christine: Any law enforcement officer knows that cars can be used as weapons, but this Stephen King adaptation isn’t what they usually have in mind. The title character, as malicious a villain as anybody played by Vincent Price or Bela Lugosi, is a red-and-white 1958 Plymouth Fury, an antique fixer-upper restored by Keith Gordon’s teenage outcast. Gradually, the car grows to be sentient and violent, with Gordon’s high-school bullies the first victims of her bloodlust. Fury, indeed.

7. Crash: No, we’re referring to the facile Paul Haggis Oscar winner from 2004.This “Crash” is from 1996, directed by the twisted mind of David Cronenberg from the twisted book by J.G. Ballard. If you’ve never heard of paraphilia—the experience of sexual arousal by atypical objects—you will after stomaching this perverse techno-thriller about a clutch of deviants who discover pleasure from the pain of car accidents. One of these freaks, played by Elias Koteas, ritualistically recreates the crash that killed James Dean, with period cars and stunt drivers. This film certainly earned its NC-17 rating, and it’s not for the faint of heart.

6. Ten: This list needs an art-house entry, and Iranian auteur Abbas Kiarostami’s 2002 masterpiece certainly fits the bill. Kiarostami has often employed vehicular travel in his movies, and this is one is set entirely in a car driven by an unchanging female driver who navigates Tehran. The 10 different occupants of the passenger’s seat provide a cross-section of the country’s religious and secular cultures, from her son (played by the actress’ own son) and sister to a bride, prostitute and orthodox Muslim. The result, residing on the blurred border between fiction and documentary, magnificently addresses the gender divide in this hardline country.

5. Cars: John Lasseter, the director of this Pixar sensation, described its lead character as “a hybrid between a stock car and a more curvaceous Le Mans endurance racer.” Voiced by Owen Wilson, it’s one of the 15-plus racecars that populate this 2006 franchise kickoff set during the buildup to a major race. This movie is to vintage car enthusiasts what “Ratatouille” is to foodies; the anthropomorphized characters range from a 1923 Model T, a 1960 VW Bus and a 1959 Fiat 500, to a Motorama show car and a U.S. military jeep. Appropriately enough, the film enjoyed its world premiere at Lowe’s Motor Speedway in North Carolina.

4. Locke: The protagonist of this 2014 British drama knows what it’s like to be stuck in an automobile for an hour and a half straight. That’s because he spends the entire duration of this nocturnal cringe-inducer stuck behind the wheel of a BMW X5, handling multiple crises—work struggles, a crumbling marriage, a child about to be born from a one-night-stand—from the sterile confines of his BlueTooth. Tom Hardy keeps to the speed limit in one of his most dynamic performances.

3. Hands on a Hard Body: Oprah Winfrey used to give free cars to her studio audience with a few snaps of her million-dollar fingers. Others have to work for our shiny new automobiles, and that’s the subject of this unusual cult documentary, which spotlighted a 1995 competition to win a Nissan Hardbody truck. We watch 24 contestants, many of them quirky characters right out of central casting, vie against each other to see who can keep their hands placed on the truck’s exterior for the longest time, with the winner making it all the way to 77 hours—and driving home, wearily, in the truck. The unlikely drama proved so compelling that the story was later adapted into a Tony-nominated Broadway musical!

2. Duel: Steven Spielberg’s debut film remains my favorite movie in his oeuvre, a nail-biting, real-time experiment in vehicular terrorism. Dennis Weaver plays the protagonist, traveling salesman David Mann, while the antagonist isn’t the unnamed truck driver that harasses him on a two-lane California highway so much as the big-wheeler itself: a Peterbuilt 281 tanker truck with a sadistic personality. Just as “Jaws” made millions of viewers avoid the beach, “Duel” makes you think twice about taking that cross-country road trip.

1. Taxi Driver: No list of great car movies would be complete without Martin Scorsese’s 1976 breakthrough, one of cinema’s masterpieces about post-Vietnam trauma. The movie offers one of the seediest views of New York City ever filmed—it’s a time capsule of pre-Giuliani hedonism—shot through the windows of Travis Bickle’s cab, always at night, when the crazies roam. Scorsese shot Bickle’s moving cab like Virgil’s vessel, gliding hypnotically through nine circles of Hell on earth, endlessly trolling cracked asphalt for undesirable denizens. It’s enough to drive anybody crazy.