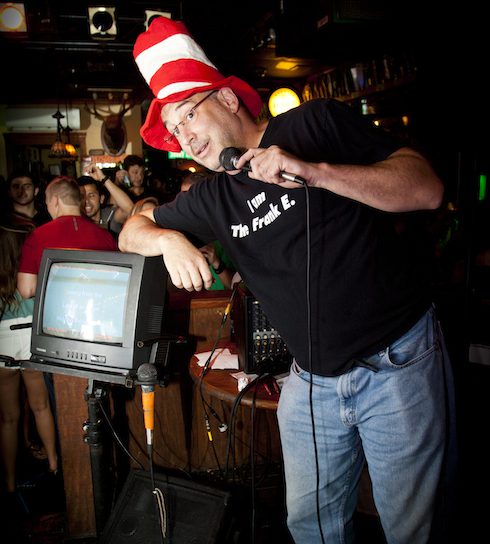 Here are a few more pearls of wisdom from Frank Edwards, the entertainer, business owner and the creator of Frank-E-Oke, Palm Beach County’s premier karaoke company.

– [Twelve years ago], I was doing sound and lighting for rock concerts, and I realized I wasn’t getting any younger. And I thought, of all the things I know how to do, which one has the lightest equipment? And that’s where Frank-E-Oke came from.

– [Karaoke tracks] still arrive on discs, though a couple of companies ship digitally. But there’s a vast number of [hosts] out there that are just copying each other’s hard drives. And the karaoke production houses went out of business. You can only steal from them for so long. I don’t do that. I have a digital license from Chartbusters. So I bought their whole library digitally from them.

– And I have an arrangement with Pop Hits Monthly. They just automatically send me 18 of the newest songs each month.
The younger groups play the younger songs. There’s a college crowd that will definitely sing anything Drake puts out, anything Rihanna puts out. There’s a younger crowd that likes Justin Bieber and Katy Perry, and little girls are always going to like Taylor Swift.

– There’s people who want to joke about OneDirection. But 10 or 15 years ago, we had NSync. But before that we had the Spinners. Before the Spinners, we had the Four Seasons. Before the Four Seasons, we had the Platters. Five guys singing with no instruments is not a new concept! NSync is exactly what the Platters would have been if they didn’t have mic stands.
With the older crowd, every once in a while something will sneak into the lexicon. Some things run forever, others come back again. There was an eight-year period where we had to do “Summer Nights” every single night. They would do it five times a night if I let them. About four years ago it became “Don’t Stop Believin,’” right before “Glee” did it. And then “Glee” pushed it up over the top.

– “Baby Got Back” is always sung by skinny white girls who think they’ve got too much back.

– Sometimes a particular singer will have three or five songs they do all the time, and they don’t vary from them. I’ve seen a guy sing for a year and a half, and I think he only knows two songs. What happens is, first, people are afraid to sing. Then they have some success and they want to sing. Then they get “karaoke successful;” everybody in the bar knows them and likes them. Then they’re afraid to do anything new, because they might screw up, having been good. Then there’s other singers that always try something new.

– We’re not trying to be the star. There are way too many people that became karaoke hosts because they wanted more stage time for themselves. In a perfect night, the Frank-E-Oke host will sing the first song, and never again. I fired somebody once for singing the last three songs of the night.

– There’s a certain kind of pub we’re attracted to. We tend to do really well in sports bars and Irish pubs. That’s 80 to 90 percent of our business. I’m friends with the people that own Delux, and we’ve joked about putting me in Delux, but it’s too nightclubby. It’s not the right mesh. Some bars I’ll walk in and I’ll joke, ‘you’re too cool for me.’ Salt7 is too cool for me. They’re not getting the after-the-softball-game crowd, so I’m not getting my core audience.