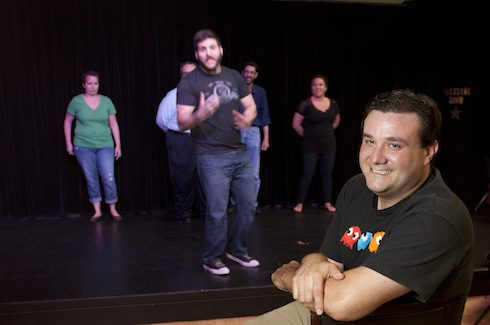 This past August, during its monthly performance at the Showtime Performing Arts Theatre in Royal Palm Place, the Sick Puppies welcomed an improv comedy legend. David Razowsky, who spent nine years as the artistic director of Second City’s Los Angeles training center, has shared stages with the likes of Stephen Colbert and Steve Carell, and these days he’s achieved guru status: He makes his living by hosting workshops with up-and-coming troupes like Sick Puppies, imparting the improvisers with his decades of firsthand experience.

Casey Casperon, the Sick Puppies’ founder (pictured above), flew Razowsky in from the West Coast for this reason, and during the group’s public performance on Aug. 9, we witnessed the culmination of Razowsky’s intenstive, which included live sketches with the man himself. But the first, the Sick Puppies performed without their headliner, in a 45-minute set of material that ran from the very brief to the impressively extended. In the highlight of the show’s first half, Casperson asked the audience for the titles of five movies they’d like to see made; his troupe proceeded to enact scenes from each of them. Only one suggestion—“Xanadu 2”—tanked; the others yielded plenty of inspiration, from the black comedy of “I Dismember Mama” to the effective absurdism of “Flashpants” and the hilariously cruel parody of “Rocky 45.”

Later, Casperson asked the audience for a term they associated with childhood. “Fruit Loops” inspired a few comic scenes of parent-child conflict that showcased his team members’ ability to milk a great moment for all it’s worth, and then some.

Then Razowsky entered the stage for four lengthy improvised scenes with Casperson alone. Razowsky’s presence almost instantly elevated the material—not to funnier places, per se, but to more truthful ones. The sketches involved a DMV applicant flirting with an employee; an ex-husband visiting his wife and child; a coach informing his star player that he’s leaving the team for a better offer; and a woman coming to terms with the reality that her best friend slept with her husband. Aside from the first sketch, these are all serious subjects, and they were handled with care and sophistication. Most of them felt rehearsed in the best way, and all contained lines that resonated truthfully, even if that truth was an uncomfortable one.

This might sound surprising at a comedy show, but it’s part and parcel of what the Sick Puppies are all about. Unlike “Whose Line Is It Anyway?,” there’s no laugh quota at a Sick Puppies show. The jokes come often, but they tend to be packaged in real-life drama. As Casperson told me for our article in the September/October issue of Boca Raton, “The reason people laugh isn’t because you said something clever or funny; it’s because you’re being real, and people relate to the emotional connection you’re making, so that it’s the type of scene where they go, ‘I’ve been there! I’m so glad I’m in the safety of my seat and I can watch someone else go through the pain I’ve been through. That’s what makes this funny to me.’

At the conclusion of the show, I told Casperson that what I just saw felt more like theater than comedy. He replied, “I’m so glad you said that,” and hugged me.

The Sick Puppies perform on the second weekend of each month at the Showtime Theatre, 503 S.E. Mizner Blvd., Boca Raton. For tickets, call 954/667-7735 or visit sickpuppiescomedy.com.