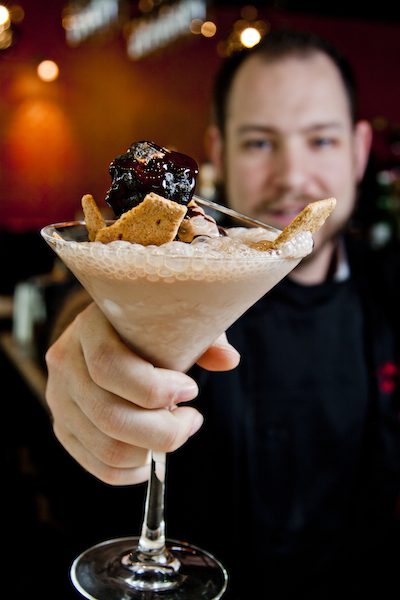 Here’s the recipe from our “Deconstructing the Dish” segment in the February issue.

If you want to raise a glass to toast the age of multitasking, Lee Hoechstetter has just the drink for you. It’s a cocktail. It’s a dessert. It’s everyone’s favorite childhood campfire sweet treat—the s’more—turned into a cold, luscious, creamy, vodka-spiked concoction that is definitely for adults only. It’s also one of the signature cocktails at Merlino’s, the Italian by way of South Philadelphia restaurant where Hoechstetter multitasks as both manager and self-described “bar chef”-slash-“beverage scientist.”

He calls his creation the Abbott’s Dairies S’Mores, a nod to the iconic Philly ice cream parlor that shut down in the 1980s after more than 100 years in business. It has everything the PG-rated s’mores have and more. All you need to add is a campfire.

Drizzle of chocolate syrup and more for garnish

Mix vodka, chocolate liqueur, half-and-half and chocolate syrup in bowl until creamy and well-combined. Add liquid nitrogen (which is cold enough to freeze alcohol and turn the mixture into something resembling ice cream). Pour into glass and garnish with graham cracker chunks, more chocolate syrup. Using small blowtorch, blacken and set fire to marshmallow and set atop cocktail.