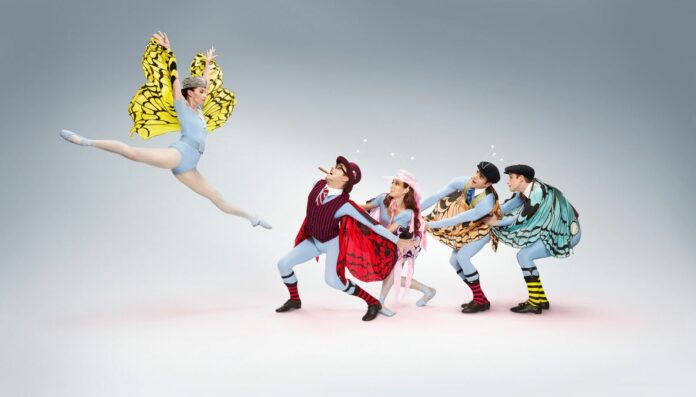 A comedy legend headlines Festival of the Arts Boca, “E.T.” comes home to Mizner, and dozens of rock bands converge in the Okeechobee wilderness. Plus, Kaki King, Sleuthfest, Miami City Ballet and more in your week ahead.

The opportunity to see the grumpy visionary Neil Young live in South Florida is exceedingly rare, but this tribute act is the next best thing. Joe Mass, Broken Arrow’s vocalist, guitarist and multi-instrumentalist, has perfected Young’s nasal Canadian warble, and the band is expertly versed in Young’s many iterations, from country-folk balladeer to protest singer to electric rocker. Mass and company hopscotch across many of Young’s 37 records, performing hits from “Heart of Gold” and “Cinnamon Girl” to “Ohio” and “Southern Man.”

Any gig by this “new guitar God” (per Rolling Stone) is something to celebrate. A guitarist and composer with prodigious talent and a chameleonic approach to genre, Kaki King has collaborated with artists ranging Eddie Vedder to Timbaland to my favorite band, the Mountain Goats. This concert experience, “The Neck is a Bridge to the Body,” may be her most ambitious yet: It’s a multimedia extravaganza in which her guitar melds into the psychedelic imagery projecting behind her. See it to believe it.

When: Varies per event

If you enjoy mysteries and thrillers—or, better yet, if you ever wanted to write one yourself—this venerable conference is a must-attend. Four days of workshops address subjects include “An Author’s Metaphysical Journey,” “Writing Dialogue That Crackles” and “You’re Giving Me the Creeps.” Informative lectures include “Our Nation’s Preparedness for Domestic Terrorist Attacks,” while “Guess Your Poison: The Game” adds a drop of levity to the proceedings. Among this year’s special guests: keynote speaker Andrew Gross (pictured), who has penned 14 New York Times best-sellers; forensic expert Katherine Ramsland; and visiting mystery authors P.J. Parrish, Hallie Ephron, Hank Phillippi Ryan and James R. Benn.

What: Okeechobee Music and Arts Festival

You never know what kind of creative partnerships can emerge from the soul-sucking tedium of TSA security lines. For Bill Murray, who met cellist Jan Vogler in an airport security line—the comic actor questioned how the classical soloist could fit his instrument in the overhead compartment—this inauspicious introduction has led to one of music’s most unlikely projects. The movie star and the musician kept in touch and soon collaborated on New Worlds, a genre-hopping album of songs, poetry and prose in which Murray croons standards and Vogler provides the stirring string solos. Chinese violinist Mira Wang and Venezuelan-American pianist Vanessa Perez complete the live ensemble for New Worlds; in addition to the songs, Murray will perform literary selections from Hemingway, Twain, Whitman and others, in what is this year’s biggest draw at Festival of the Arts Boca.

The sprightly, glamorous third program in Miami City Ballet’s season exemplifies its dual mission to honor the classics while fostering the ballets of the next generation. The latter will be represented by a world-premiere commission by superstar Chicago choreographer Brian Brooks, sandwiched between bona fide masterpieces: Balanchine’s sumptuous and thrilling “Theme and Variations” and Jerome Robbins’ exuberant, hilarious “The Concert.”

What: “E.T. The Extra Terrestrial” screening with orchestra

Audiences have been over the moon about John Williams’ score for “E.T. the Extra Terrestrial” since the movie’s 1982 debut. The composer’s soaring melodies are as iconic as the imaginative film’s special effects and as moving as its welcoming moral compass. It won an Oscar, Grammy, Golden Globe and BAFTA, and it has been reissued three times—most recently in a two-disc, 157-minute 2017 edition complete with previously unreleased tracks. But this event promises to be even more complete and immersive than that: The Symphonia Boca Raton will provide live orchestral accompaniment to a special screening of the movie. You might even finish by the time the Oscars kick in.

Speaking of those Oscars, Fort Lauderdale International Film Festival board member Steve Savor is once again opening up his lavish home for an Academy Awards viewing party, with proceeds benefiting the nonprofit Savor Cinema. Attendees must dress like they’re attending the real McCoy—black tie is mandatory—and in addition to the big-screen telecast, they’ll enjoy three live bands, food, an open bar and “special surprises.” Limited valet parking will be available, but Uber is recommended. In the meantime, check out Boca magazine’s podcast analysis of the Oscars, in which I discuss the nominations with fellow movie critic Al McGhee.