What Is Mizner Park Worth to the City of Boca Raton? 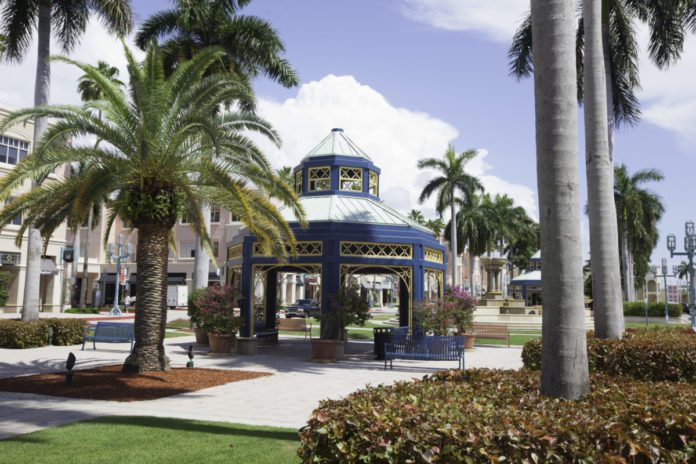 Boca Raton has lost its appeal in a lawsuit seeking to determine the value of property in Mizner Park.

In 2018, Brookfield Properties Retail Group, acting in the name of the original developer three decades ago, sued the community redevelopment agency. The CRA owns all the land in Mizner Park except for that under the amphitheater. Under its lease, Brookfield has an option to buy the property. Though the company also owns the residential and office buildings, the land in question is under the retail buildings.

Brookfield also pays rent to the CRA. To determine the fair market value, Brookfield argued that appraisers should base it on the property being encumbered—in legal terms—by the 99-year-lease. The lease, the company said, amounted to a restriction. Presumably, an appraisal on those terms could mean a lower price. The CRA argued that the lease should not matter.

Brookfield acquired Mizner Park when it bought General Growth Properties. When Brookfield expressed interest in exercising its option, Boca Raton wanted the company to make an offer. The company countered that it first wanted to get a sense of the property’s value through arbitration. When the two sides were unable to resolve the issue, Brookfield went to court.

The company won at trial. Palm Beach County Circuit Court Judge Lisa Small ruled in 2020 that the lease does not specify encumberance as a factor in determining the property’s fair market value.

Last week, a three-judge panel of the 4th District Court of Appeal unanimously upheld Small’s ruling. Writing for the court, Judge Dorian Dimoorgian cited language in the lease directing appraisers “to use the CRA’s fixed rental revenue in calculating the fair market value of the property.”

What does all this legalese mean for Boca Raton? Obviously, a higher price would mean more money for the CRA—which oversees downtown development—and thus the city, of which the agency is a part. The case comes as City Manager Leif Ahnell has warned of a multi-million-dollar shortage in the city’s operating budget because of lower repayments from the CRA for services downtown.

Mizner Park itself has new tenants. Among them are: Strike 10, a bowling and sports club; Calaveras Cantina and the fitness center Hotworx. Last month, the CRA allowed Brookfield to lease what had been cultural space for a medical office.

If the ruling stands, it will drop the flag on a process to determine the value of the land. After that, Brookfield likely would decide whether to make a formal offer. Negotiation would follow, perhaps leading to arbitration.

Boca Raton could appeal to the Florida Supreme Court, but the justices would be unlikely to take the case after the CRA lost at trial and unanimously on appeal. The city also could ask for a hearing before the DCA or seek other options.

I asked a city spokeswoman for comment from the legal department. By deadline for this post, she had called twice and received no response.

State of the City

Mayor Scott Singer didn’t make much news during Tuesday’s State of the City Address. He again touted the Brightline station, scheduled for completion this year, and Blue Lake Elementary School, set to open this August.

Singer did note, however, that roughly 3,000 businesses have opened in Boca Raton over the past 22 months. Those additions, he said, have returned the city to pre-pandemic levels of active businesses.

Boca Raton, Singer said, will have to “hustle and hunger” to keep capitalizing on the pandemic-influenced shift of people and companies to South Florida. With all cities touting themselves, Boca Raton will stress “our city’s paradise.”

Speaking of Blue Lake Elementary, the updated plan for the school’s boundary will go to Superintendent Mike Burke.

During last week’s meeting of the Advisory Boundary Committee, there was general agreement on which students will attend Blue Lake. That was a change from public criticism of the staff’s first plan in January. The district is compact and satisfies many parents who had believed that Calusa Elementary—which is two miles north of Blue Lake and very overcrowded—would have a disproportionately wealthy student body.

Opposition now comes from parents whose children would move from Addison Mizner School and Verde School to Blue Lake. Those are expanding from elementary to K-8. Blue Lake’s design will allow addition of middle-school grades, but there are no plans for that because there is no money. Though Blue Lake also will be new, parents want continuity for their children.

Burke can present the plan, known as Study 3, to the board at a workshop meeting or propose changes. The district’s priority remains to make sure that no elementary school in Boca Raton goes significantly above capacity in the next five years.

Halberg filed the complaint based on comments at a community redevelopment agency meeting last September. Before the CRA board was the award of a grant to a resident who was renovating a historic home. Stuart & Shelby was doing the work. Such grants normally are approved routinely.

This time, however, Commissioner Shirley Johnson wondered whether the CRA could deny the grant based on Halberg’s previous criticism of the agency. Halberg lost his bid for an affordable housing project that the CRA is financing even though the staff had ranked his company first. Casale also criticized Halberg’s comments. The CRA approved the grant to the homeowner. Refusing it on the grounds Johnson proposed almost certainly would have been illegal.

Halberg said he filed the complaint because the comments unfairly targeted the homeowner—“guilt by association”—and because of worries that his business could suffer. In his complaint, Halberg argued that Casale was trying to silence his criticism, which amounted to personal gain for her.

Casale called the complaint “frivolous” and accused Halberg of trying to cancel criticism. The commission found “no legal sufficiency” to pursue the complaint, though the order said, “No factual investigation preceded the report, and therefore the commission’s conclusions do not reflect on the accuracy of the allegations of the complaint.”

Halberg told me that he also has filed complaints against Casale and Johnson with the Palm Beach County Commission on Ethics and is still “talking with the state.” He continues to argue that while Casale realized no financial gain, she benefits by making Halberg “a campaign issue.”

Halberg also continues to be mad about what his client went through. “Why can they just say something about a person just because of who he does business with?”

One of Tri-Rail’s board members is Miami-Dade County Commissioner Raquel Regalado. She has strongly criticized Abrams for delays in the opening of Tri-Rail’s new Miami station, which will be part of Brightline’s complex.

The station was supposed to open in 2017. The latest problem is that Tri-Rail trains can’t enter because they’re too wide. Dealing with Tri-Rail representatives, Regalado said, is like dealing with “adolescent children.” The Miami Herald reported that Brightline contributed to her campaign.

Abrams offered his resignation at the end of last month’s meeting, saying that he had lost the board’s support. But Abrams said he would remain until a successor starts.

When we spoke Wednesday, however, Abrams said, “I enjoy a majority of support on the board.” He had offered to negotiate a severance, but the agency doesn’t offer them.

Abrams said Brightline is to blame for the problem that incensed Regalado. “They’re addressing it.” He added, “There also have been issues on our end,” but he said they occurred before he became director.

The board meets next Friday. Abrams said he will “put himself on the agenda. I want clarity.” And what is his wish? “I’m wishing as we speak.”