Where Have All the Movies Gone? 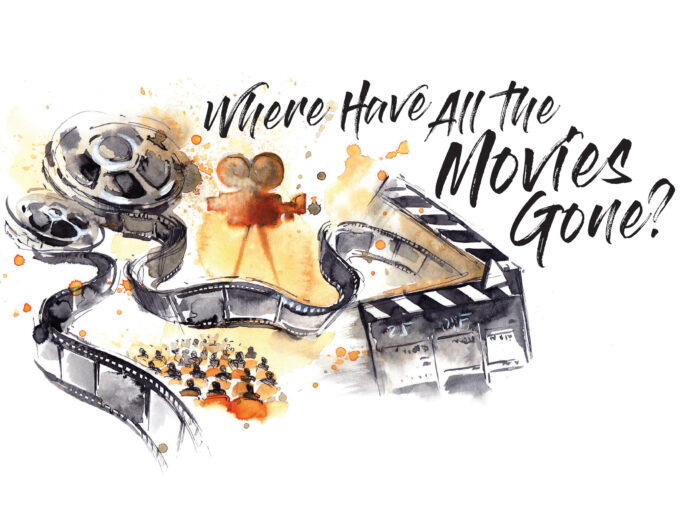 Once a dominant state for film production, Florida has faced mounting losses in talent, revenue, and big-screen prestige

As long as we have had movies, producers have wanted to shoot them in Florida. During the silent era, it was Jacksonville, of all places, that earned the distinction of the “Winter Film Capital of the World,” first with the pioneering Kalem Studios in 1908, followed by more than 30 film companies alighting in or near the city.

Filmmakers were drawn by many of the qualities that have made the Sunshine State universally attractive—the warm climate, the exotic locations, the varied architecture—as well as its business assets, like efficient rail service and inexpensive labor. As rail lines and development expanded southward, so too did producers, bringing Florida to the rest of the world through such iconic Golden Age titles as “Moon Over Miami,” “Key Largo” and “The Yearling,” on through to multiple James Bond pictures, award-winning projects like “The Godfather Part II,” “Apollo 13” and so on.

Eventually, the entire state became a cinematic postcard—attracting both tourists and local artisans who made their livings off movies, television shows, music videos and commercials. By 2006, Florida’s film industry was riding high, cresting at third in the U.S. for revenue generated, behind only California and New York. Moreover, a 2013 survey from Visit Florida showed that nearly 23 percent of domestic tourists in Florida said something they saw on film or television contributed to their decision to visit our state.

The 2020 state rankings from Business Facilities, the gold standard for location leaderboards, paint a drastically different picture. Our neighbor to the north, Georgia, finished in the top position for film production, followed by New Mexico, Louisiana, California and New York. Florida did not even crack the top 10.

The reasons for this decline, like so many issues, boil down to money and political will. From 2004 to 2016, the state legislature supported tax incentive programs that made shooting in the Sunshine State a more lucrative option than states without such a program. The most recent law, passed in 2010, created a five-year, $242 million transferable tax credit for the state’s film and TV industry, a move that contributed to 150,000 local jobs and $2.2 billion in wages. But these credits expired in 2016, and despite efforts by lawmakers in both parties to produce bills to replace them, none have been taken up for a vote.

The result has been a gradual downturn for Florida’s film industry, and a commensurate uptick in Georgia’s, whose 30-percent tax credit has turned the Peach State into an entertainment powerhouse. Today, Florida is one of only 17 states without a tax incentive program, and the only one in the Southeast.

“Ultimately, Florida should be a destination for film and television, because of weather, because of locations, and because of what we as an industry have built over the last hundred years of infrastructure and talent and knowledge and history,” says John Lux, executive director of Film Florida, a nonprofit trade organization that lobbies legislators. “Our challenge has been making the economics work in terms of competing with other states. It makes it a value proposition.

Part of Lux’s job involves talking to potential producers and crunching the numbers, which offer a grim snapshot: more than 80 projects totaling $1.3 billion in known lost opportunities from producers who considered Florida but chose other states, 220,000 lost hotel room nights, and 110,000 lost jobs for Florida-based cast and crew members. His team has even created a “Lost Business Map” that breaks down projects by region. When “Baywatch” moved most of its production to Georgia, for instance, it meant a $10 million loss for Palm Beach County; losing seasons one through three of “Rosewood” meant $50 million in lost revenue for Miami-Dade County.

“Everyone in the state of Florida felt, and continues to feel, the struggle of not having an incentive program,” adds Michelle Hillery, deputy film commissioner for Palm Beach County. “We don’t have to do a lot to get people to want to film in the state of Florida. [But] because it is very well known that we are not as competitive as other states are, every trade show that we have attended in the past, phone calls we’ve had, relationships we’ve built over the years, they keep saying, ‘When are you going to get a program? We want to film there. We had such a great experience, but we just can’t financially make it work.’ That certainly is the struggle.”

Leah Sokolowsky, a freelance location manager, has worked on the Florida components of such marquee entertainments as Amazon’s“The Marvelous Mrs. Maisel” and Martin Scorsese’s “The Irishman.” But she too has begun to feel the pinch of lost projects and lost income.

“I’ve contemplated going to Atlanta,” she says. “I’m fighting to stay here. My income, even pre-pandemic, had definitely been cut by, say, 30 percent. And I have two kids, one of whom just went to college. That’s not easy. And I’m one of the fortunate ones; I’m working consistently. But the year ‘Ballers’ left, I was supposed to start working in a week. And I got a call that they were moving to L.A., because we didn’t have an incentive. That was six to eight months of steady work.

“I’m capable, I’m strong, I love my family, they’re here, my life is here,” Sokolowsky adds. “And that’s how most film workers in the industry were. But many have been forced to make a different choice, and uproot their families and shutter their businesses and move elsewhere. We never were gypsies before, but lack of an incentive has turned us into gypsies. … We have more than 100 years’ history of filmmaking here in our state, and a lack of incentives has just kneecapped our industry.”

David Silvers, a Democrat representing parts of central and western Palm Beach County in the Florida State House, grew up with a passion for film that literally hit close to home. He was 8 or 9 years old when his father’s house on Miami Beach was used as a location for an episode of“Miami Vice.”

“I saw actors, producers, writers, directors, craft services, makeup artists … they were all throughout my father’s house for two and a half months,” Silvers says. “I thought to myself, this is so neat; there are so many people involved. It’s a whole economy.”

Silvers learned more about film’s local economic impact shortly after he was elected, in 2016, which coincided with the expiration of the most recent incentives. Mike Miller, then a Republican state representative from Central Florida, asked the Democratic freshman to join him on his bipartisan film bill. “I went to it like a fish to water, because I love film, I love politics, and I thought, this is the best of both worlds,” Silvers recalls.

Silvers has co-sponsored film-funding bills three out of his four years in the state House. All died in committee. In 2020, the most recent proposal, a $2 million taxpayer-funded rebate program co-sponsored by two Republicans, State Rep. James Buchanan and State Sen. Joe Gruters, also never came up for a vote in the fully Republican-controlled legislature. Among local policymakers, tax incentives have broad support; it’s the leadership that so far has proven intransigent.

“I would get co-sponsorships with the right of the right, because they see it as pro-business, pro-industry,” Silvers says. “People understand it’s not a partisan issue; it’s about having jobs here in the state. [But] there were certain influential groups that didn’t like incentives.”

If John Lux’s job is to convince legislatures to support incentives, conservative libertarians like Charles Koch lobby from the opposite end of the spectrum, and they arguably have a louder bullhorn.

“A lot of it comes from ideology—that we shouldn’t be incentivizing large corporations,” says Sokolowsky, the location manager. “There seems to be a certain group of members in the legislature that just don’t believe in incentives, period. And that’s wonderful if we’re living in a perfect world, but we are not. By crippling an industry, you’ve doomed us with that ideology.”

“If money was leaving state coffers in any way, shape or form, for film, it was looked down upon,” adds Silvers. “I get it; we have a lot of needs in our state when it comes to health care and education, affordable housing. But you’re going to be pushing out an entire industry that generates billions of dollars in revenue for your state. The rate of return is incredible, three and a half dollars to every dollar you put into it. It doesn’t make any sense. … Now that we’ve got a new speaker, Chris Sprowls, and a new president of the Senate, Wilton Simpson, I want to be optimistic that those type of bills will see the light of day.”

That said, Silvers is expected to wait until at least 2022 to file another film bill; each state rep has only seven slots per session, and he needs to use his wisely. “I’m going with a gut feeling that the 2021 session will be hyper-focused on COVID-related legislation,” he says.

Lux, however, sees an opening with Speaker Sprowls; after all, film incentives and COVID relief don’t have to be mutually exclusive. “Because of Florida’s economy due to the pandemic, we’re hopeful that there’s more open-mindedness. …,” he says. “There’s a lot of reasons to look at this type of program now, given the economic challenges that the state has in terms of how we can bring in quick, big influxes of cash and help the economy.”

“We have the majority of the support in Tallahassee,” adds Hillery. “If you ask most of them, they understand and support the overall economic benefits that the industry has. … It really can aid in the recovery process.”

Meanwhile, Georgia will continue to eat our dust. In 2019 alone, Georgia hosted the Avengers and Godzilla, Shaft and Annabelle, “Ford v. Ferrari” and “Lady and the Tramp.” The state’s Republican governor, Brian Kemp, recently announced 75 post-COVID film and TV projects, which will bring 4,000 production workers and $2 billion in revenue to the state.

Rather than treating our northern neighbor as a competitor, it might be wise to learn from it instead.