Wired For the Better 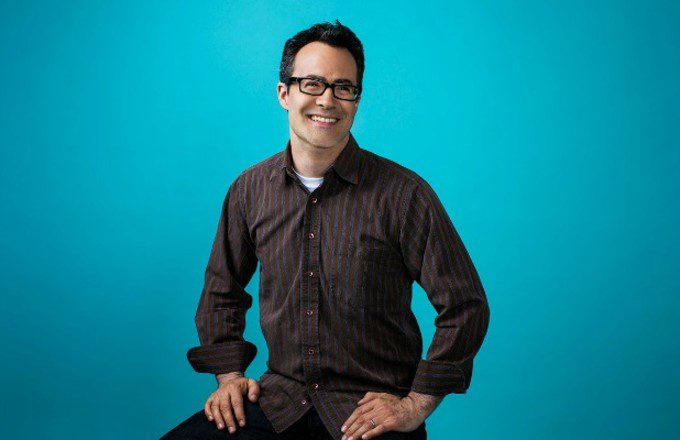 Is technology our friend or our enemy? Is it making us smarter, or dumbing us down?

The answer to these questions is probably “both,” but the doomsayers usually win out in the popular press, with proof in the pudding of misspelled tweets, asinine Facebook posts and brain-melting YouTube trifles that flit across hundreds of thousands of screens every day, turning us into numbed zombies in hopeless throng to megabytes and satellites.

Clive Thompson takes the more halcyon view. One of North America’s most prominent technology writers argues that tech is actually making our brains smarter, as the title of his insightful 2014 book, Smarter Than You Think, suggests. Last night, Thompson took to the lectern at Mizner Park Studio Theater to explain some of his evidence at a thought-provoking, amusing lecture at Festival of the Arts Boca.

Thompson spoke quickly, incisively and seemingly extemporaneously, aided by slides in the manner of a TED talk. He opened his presentation, surprisingly, in Stalinist Russia, showing us how the Soviet dictator would conveniently “eliminate” political rivals from his photographs until only Stalin remained in frame, through a method of proto-Photoshopping. Through this Orwellian rewriting of history, Thompson was saying that “reality” has been manipulated to serve the needs of the powerful long before the technology to do so became democratized.

He then moved on to actual Photoshop manipulation, centering on the notorious Iranian missile-launch hoax of 2008—a doctored image of four rockets firing simultaneously that even the world’s top newspapers ran as fact. But here’s the thing: It took a clutch of tech-savvy computer nerds to deduce the truth, work collectively, expose the hoax and then mercilessly spoof it. In one Photoshop manipulation, a giant cat paws at one of the projectiles (“Cats are the fungible go-to animal when you want to mock someone,” Thompson said).

In this case, tech knowledge helped expose the truth, and Thompson spent the rest of his lecture elucidating other ways that a perpetually plugged-in, begizmoed populace is helping to change the world and enhance our brainpower. He used terms I had never encountered before, like “public thinking” and “ambient awareness” and “video literacy” in a lecture that bounced across such topics as real estate, the evolution of the camera, pointillist art, the fourth season of “Breaking Bad,” hidden videogame codes and the folding of proteins in the development of pharmaceuticals. He smattered his presentation with astonishing statistics: Thanks to social media, the world now produces 3.6 trillion written words per day, which Thompson argues is making a nation of non-scribblers better and more-prolific writers.

Thompson explained that a truly worldwide Web has helped to expose, advocate and connect in times of global or national distress, such as corruption and violence in Kenya and the earthquake in Haiti. And he even found a defense for reading someone’s Tweets—for an entire year. “Follow [my feed] for a year, and you’ll have a map of what’s going on inside my head,” he said.

The lecture, which should have been better attended, surely didn’t convince everyone that a perpetually connected world is a force for good. But I certainly walked away with new perspectives on a continually evolving topic—not to mention the discovery of a new author that’s well worth “following.”