Your Brain on Music, Live 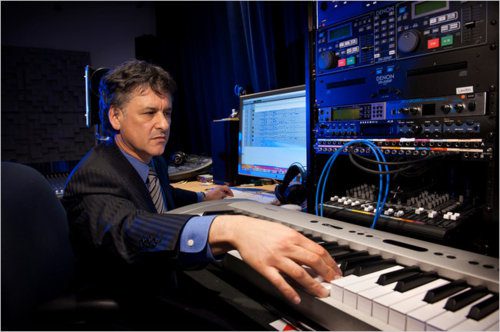 If you didn’t catch last night’s Festival of the Arts appearance by the best-selling author and neuroscientist Daniel J. Levitin, you missed one of the best speaking engagements I’ve seen in the Festival’s eight-year history. Addressing a packed audience in the comfy Mizner Park Cultural Arts Center, Levitin didn’t simply speak about his stock in trade—how our brains are affected by music and vice versa. He conversed, throughout the program, with the Festival’s music director, Constantine Kitsopoulos, along with nine members of the Festival Orchestra, who turned Levitin’s theories and research into an acoustic reality before our eyes.

For one thing, both men were gracious, marvelously informed and even funny; I didn’t expect to laugh so much at a neuroscience lecture. But mostly, the talk was so special because it was so inimitable. With so much exclusive, Festival-centric talent under one roof, it was an event that could not be replicated at any other venue across the country, and, going forward into future Festivals of the Arts, it should be held up as a touchstone for the festival’s potential.

The evening also provided the rare opportunity to hear good musicians playing badly, which made audiences appreciate their goodness even more. One of the most revelatory portions of the program involved the Festival orchestra playing a Mozart composition exactly as the notes were written on the page, without any feeling, dynamics or direction from a conductor. “No offense, but that sounded like a seventh-grade orchestra,” quipped Levitin, in response to the lethargic interpretation.

Other live auditory experiments continued throughout the evening, including a fascinating study in improvisation that was “conducted” by Levitin, whose restrictions on the musicians only fostered more creativity in them. Kitsopoulos offered that “improvisation comes from discipline and structure, and then abandoning part of that structure,” while Levitin concluded that “the more constraints you have, the easier it is to improvise.”

The evening ended gracefully, with the Festival Orchestra finally permitted to be absolutely perfect in its playing, concluding with the infectious first movement of Mozart’s “Eine kleine Nachtmusik.”

Here are a few other revelations from evening, courtesy of Levitin.