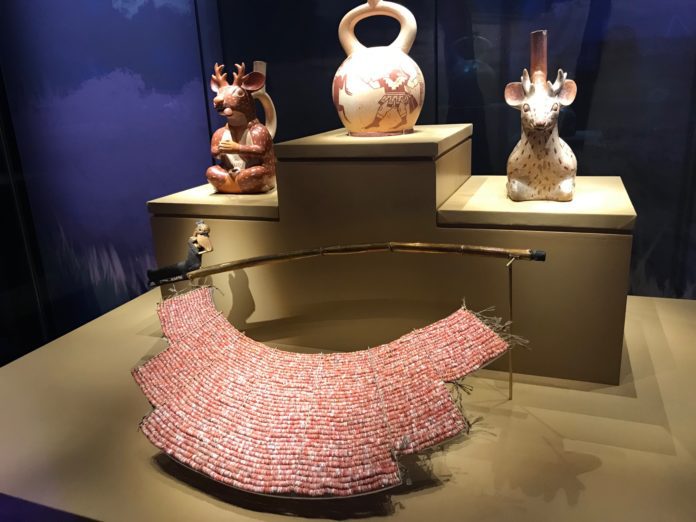 The moment has finally arrived. After months of anticipation, the Boca Raton Museum of Art’s “Machu Picchu and the Golden Empires of Peru,” a blockbuster exhibition of cultural, historical and, of course, artistic significance welcomes its first public visitors tomorrow. A singular driver of tourism to Boca Raton for the next five months, it is poised to become the museum’s most-attended exhibition in, perhaps, its entire history.

Yesterday, at the museum’s exclusive media unveiling, I was among the first to tour the exhibit—to judge if the final presentation matches the effusive hype. The answer is certainly yes, if a somewhat qualified yes, and we’ll get to the qualification later.

First off, the museum is positively transformed: Enter the building, and its familiar trappings quickly give way to a redesigned interior in conjunction with the show’s organizers, World Heritage Exhibitions. Faux stone archways usher visitors into the second floor for the show’s introduction, in which a short video, projected on a hi-def screen and supplemented by sophisticated animations, introduces the themes from Andean culture that will be present in the nearly 200 ceremonial objects that await in the adjoining galleries.

Under dim lighting, these sacred antiquities from ancient Peru—ceremonial vessels and sculptures endowed with stirring power and symbolism—generate an atmosphere of hushed awe. The beautifully detailed ceramics explore concepts of duality—masculine/feminine, human/animal, birth/rebirth—that were central to the worldview of Peru’s ancient empires.

In the next gallery, we learn about the extraordinary mythology of Ai Apeac, superhero warrior from the Moche culture, along the North Coast of Peru, who fended off and absorbed a gauntlet of oceanic enemies before succumbing to the Decapitator, a name fitting for a final boss in a video game. But Apeac’s posthumous union and regeneration by Mother Earth makes for an inspiring coda. It’s an incredible ride, with artworks immortalizing every step of Ai Apeac’s harrowing journey, presented with a riveting narrative coherence. At the end, we see Apeac rebirthed in corncobs and thrusting out of a chili pepper, suggesting his presence in the fertility even of agrarian life.

There is an immersive, no-space-unused quality to these galleries, in which visual contributions extend to the ceiling, where stars twinkle and birds soar, and to the floor, where the lighting casts mercurial ripples, reflecting the underwater journey of Ai Apeac. Videos embedded into the objects’ display cases reveal further information about their meanings, while a soundtrack of percussive tribal music and the rattling of snakes adds subtle richness to the experience.

Continuing downstairs, sculpted vessels gradually give way to tapestries from Andean weavers and, eventually, the stunning gold adornments worn by the most eminent of Peru’s ruling class. An ensemble of golden crown, ear ornaments, necklace, epaulets and pectoral covering radiates at the entrance of this gallery, beckoning visitors with its sheer exorbitance. Further examples of gold jewelry and armor are presented throughout the space, and the human silhouettes, their shadows indicating the anatomical location for each mounted object, is a lovely touch.

If I may offer a couple of minor quibbles: It is possible to have too much of a good thing. This is never the case during the Ai Apeac gallery, but at some point, the proverbial luster of the vessels and sculptures begins to lose its shine, and by the eighth or ninth illustrated bowl, a certain sameness takes over. Of course, if I were a professional or amateur enthusiast of antiquities, I would respond with endless curiosity throughout; as a critic mostly of contemporary and more secular forms of art, I can say that perhaps 150, not 192, objects would have made for a leaner selection.

Conversely, I would have appreciated more of a focus on Machu Picchu itself, given the Incan citadel’s importance in the exhibition’s title. There is only one room about the actual structures, including jaw-dropping aerial videos and insights into the engineering marvels that went into their construction.

Which brings us to the exhibition’s most extraordinary element. You absolutely must finish your visit in the Wolgin Education Center, where mustard-colored pods equipped with virtual reality headsets offer a breathtaking, guided thrill ride over Machu Picchu’s mountains, canyons and rivers, where llamas graze and butterflies flit before your eyes. The seat rumbles. It tilts up and down, left and right, with 360-degree views that place you as high as a condor. Subtle scents, from plumeria to jasmine to desert rain, trickle into the nose when appropriate.

It feels something like magic—a visit to Peru that is cheaper than a plane ticket. Although after a couple hours discovering the ancient country at this exhibition, future Peruvian tourists from Boca Raton will not be in short supply.

“Machu Picchu and the Golden Empires of Peru” opens tomorrow at Boca Raton Museum of Art, 501 Plaza Real, and runs through March 6. Get tickets at bocamuseum.org, or call 561/392-2500.