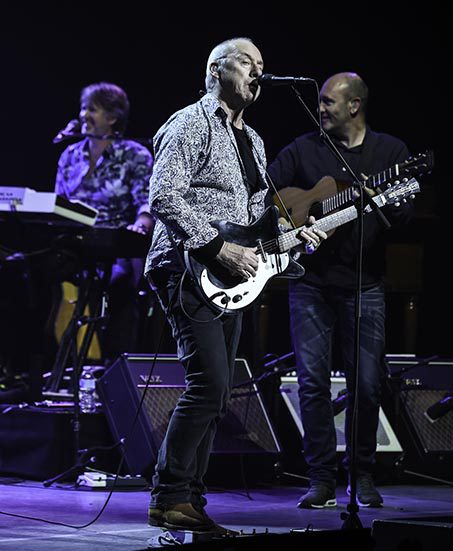 [NOTE: The Week in Review will run Wednesday. All concert photos by Ron Elkman.]

Eight years ago, when asked if he had any interest in reuniting the band that sold some 120 million albums and turned him into a guitar hero for the ages,Mark Knopfler revealed that he had zero interest in revisiting that part of his past.

“It got too big,” Knopfler said of the white-hot spotlight that followed Dire Straits around the world during the mid-1980s height of its popularity. “If anyone can tell me one good thing about fame, I’d be very interested to hear it.”

In that sense, the Knopfler who took the stage Saturday night at Broward Center for the Performing Arts recalled another rock icon who follows his own muse. In the same way that Robert Plant eschews the mega-millions promised by a Led Zeppelin reunion to pursue music that speaks to him, Knopfler marches to his own tunes. Over the past two decades, he’s delivered eight solo albums and several film scores; along the way, he’s explored a variety of genres and influences, including a collaboration a few years back with country star Emmylou Harris.

So it came as no surprise to anyone familiar with his post-Straits career that Knopfler and his exceptional seven-piece band would deliver an evening of exquisite musical storytelling that visited different eras without overstaying the welcome.

What did prove surprising was how the sold-out, decidedly middle-aged crowd reacted to the 16-song set. Though clearly hoping to hear more of their favorite Dire Straits songs—witness the constant shout-outs in between songs, requests Knopfler made clear that he and the band would politely ignore—the wildly enthusiastic Halloween night audience had Knopfler’s back all night long.

The set drew early from Knopfler’s solo work, including two songs—“Broken Bones” and “Skydiver”—off his current album, “Tracker.” The backing band, which included former Dire Straits keyboardist and longtime Knopfler collaborator Guy Fletcher, was a show unto itself, incorporating everything from the cittern to the uilleann pipes—the national bagpipes of Ireland—into the music. Special kudos to John McCusker (violin) and Nigel Hitchcock (sax), who both lit up the stage throughout the evening.

Though Knopfler, 66, often deferred to the prodigiously talented members of his band, he drew more than enough mesmerizing sounds from his Stratocaster to remind us why he’s considered one of the great finger-pickers in rock history. “Hill Farmer’s Blues,” off his 2002 “Ragpicker’s Dream” album, showed Knopfler at his virtuosic best—a haunting, steadily building atmospheric number that brought the crowd to its feet. The beautifully reflective instrumental “Father and Son,” from the 1984 soundtrack to the movie “Cal,” was a special treat for anyone familiar with Knopfler’s movie-score work beyond “The Princess Bride.” Other guitarists may have better overall chops and showmanship, but good luck finding anyone who can coax more emotion out of a few chords.

When they did delve into the Dire Straits catalog, the band delivered home runs. Knopfler, in fine raspy-voiced form, delighted the crowd with the quiet classic “Romeo and Juliet,” as well as the song that launched the band, “Sultans of Swing.” The signature guitar work on “Sultans,” a sound that seemed so compelling and cool back in 1978, was just as fresh and hip 37 years later. How often can you say that about a song? It’s no wonder that it drew one of the biggest ovations of the night. Two songs off “Brothers in Arms,” the 1985 album that sent Dire Straits into the stratosphere, also found their way into the set—“Your Latest Trick” and an encore version of “So Far Away.”

It may not have been the set that every Dire Straits fan wanted, but it certainly was one they appreciated.

So Far Away
Piper to the End