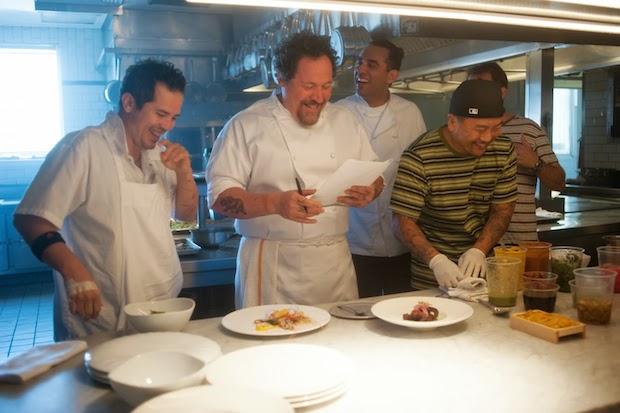 “Chef,” a labor of foodie love written by, directed by, and starring Jon Favreau, is like a restaurant that expends all of its talent on appetizers and sleeps through the rest of the dining experience. The first third of this movie, which opens Friday in Boca and elsewhere, is funny, busy and exciting, driven by the frantic commotion of an upscale Los Angeles restaurant kitchen, where celebrity chef Carl Casper (Favreau) is preparing for the evening’s special guest: acid-tongued food critic Ramsey Michel (Oliver Platt, whose casting as a food critic seems almost predestined).

In scenes like this, the rubber of culinary invention meets the road of pennywise caution, and these conflicts between art and money are some of the most truthful moments in the film. The frustration on Favreau’s face as he’s forced to confront his bean-counting boss is palpable, and makes for a nice metaphor for his own career, which for the last decade has consisted of competently directing other people’s screenplays, selling his scripts to other directors or otherwise producing the visions of others. In effect, he has been working in a system of compromise in which the final product is never entirely his; he’s usually at the mercy of one Riva or another. “Chef,” finally, is his first example of complete authorship since 2001’s “Made.”

Unfortunately, the film’s bravura opening stanzas, which crescendo into a vibrant Twitter feud between chef and critic—and ultimately an in-person confrontation, captured on countless phone-cameras and rocketed across the Web, that causes Casper his job—gradually peter into rote predictability, revealing that the dramaturgical intervention of others wouldn’t have been such a bad choice. Watching Casper rebuild his life, which includes belated bonding with his 10-year-old son Percy (a lovable Emjay Anthony) and a healthier relationship with his ex-wife Inez (Sofia Vergara), is, alas, not as interesting as witnessing his implosion. A sabbatical in Little Havana gradually inspires Casper to open a food truck serving gourmet Cuban fare, the development and touring of which provides an opportunity to bring Percy along, not to mention Martin (John Leguizamo), the loyal sous chef from his old restaurant.

When it’s no longer situated in the heat and tension of a big-city restaurant kitchen, the action slows to a crawl, with the genuine humor and snappy authenticity of the early moments yielding to an especially gooey center—a hilarious cameo by an effortlessly offensive Robert Downey Jr. not withstanding. As a writer-director, Favreau is obviously a humanist who sees the best in his flawed characters, and there’s nothing wrong with a good story about redemption and American entrepreneurship. But this film’s (and Casper’s) arc toward salvation is so oppressively sunny that you might want to lather up with some Coppertone before entering the auditorium. A climactic deus ex machina involving the re-appearance of a certain character almost plays like a parody—the sort of ending that’s tacked on as a reaction to the grumbles of disappointed test-screeners.

Call me a cynic, but in its attempts to discover its heart and soul, “Chef” turned its brain off.