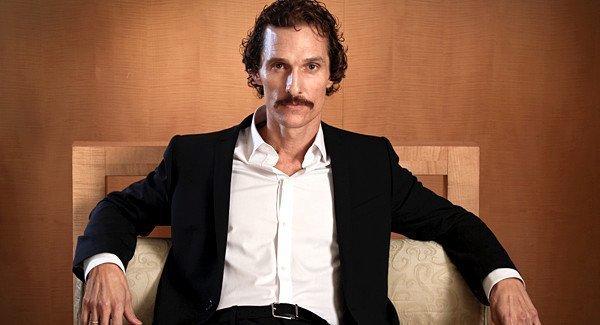 Ten years ago, who would have thought that Matthew McConaughey would become one of the best actors of his generation? It’s taken long enough, but it’s safe to say he’s there: The onetime “Sexiest Man Alive” (per People) and veteran one-trick thespian impressed the critical consensus with his sleazy scene-stealing in last year’s “Magic Mike,” a trend that continued with memorable parts in “Bernie” and “Killer Joe.” This year, his performance in “Mud” was rightly viewed as an early Oscar favorite, one that might very well be upset by … Matthew McConaughey again, in “Dallas Buyers Club.”

You know McConaughey is finally ready for his statue considering the inverted DeNiro he pulled to film “Dallas Buyers Club:” That’s to say he lost a lot of weight, 50 pounds in fact, to play Ron Woodroof, the emaciated real-life AIDS patient-turned-businessman-turned-activist. It’s a marvelous performance full of contradictions: greasy and refined, calculated and spontaneous, vitriolic and tender, funny and poignant, and above all effortless, to the extent that, within minutes, we forget we’re watching McConaughey. He wears this guy like a second skin that seems to be falling off him half the time.

At the film opens, Ron Woodroof is a mangled, profane lowlife in 1980s Texas, a McConaughey role of yore: He drinks, he shoots up, he cusses, he gambles at rodeos with no intention to pay up, he has rough three-ways with prostitutes in the darkened stables at said rodeos, his groans intermingling with the snorts of bucking bulls. He shambles to work as an electrician and, when an accident with a circuit box sends him to the hospital, his blood tests reveal that he has AIDS, and with it, some 30 days to live.

We can tell by looking at McConaughey, but Woodroof is initially in denial, one of the five stages of grief he rifles through in the wake of his diagnosis. Woodroof is a virulent homophobe, offended that he could carry a disease only “faggots” get. His friends and co-workers are knee-jerk homophobes too – remember, this is Dallas in the mid-‘80s, not exactly Castro Street in post-prop 8 California – so he soon finds himself the neighborhood pariah, a sad dying man whose only lifeline are the experimental medications he pilfers from the hospital Dumpsters and, eventually, from a trip to a unscrupulous expat doctor in Mexico.

It turns out that for Ron, that only thing that seems to work at battling his virus are the natural vitamin and mineral supplements he smuggles across the border, and he comes to the realization that they might be helpful for other AIDS sufferers, too. The problem is, they aren’t FDA-regulated. So begins the moral heart of “Dallas Buyers Club:” the battle between Ron’s experimental approach, which he begins selling en masse and under the radar, and the Big Pharma-certified AIDS miracle drug AZT, which Ron contends is only worsening patients’ conditions. He winds up with some surprising allies in his corner: a sympathetic doctor at the local hospital (Jennifer Garner) and the acerbic transvestite Rayon (an extraordinary, and unrecognizable, Jared Leto).

Director Jean-Marc Vallee and screenwriters Craig Borten and Melissa Wallack are careful not to turn Ron into a saint, understanding that his acceptance of homosexuality was as incidental as it was incremental. His anti-establishment activism in support of defeating a largely gay affliction came late in his come-to-Jesus reformation. This is a guy who simply didn’t want to die in a month, and when he found a way to stay alive, he wasn’t another Harvey Milk so much as a businessman capitalizing on an underserved market.

But as “Dallas Buyers Come” becomes a socially conscious David Vs. Goliath tale of a man against a medical machine, it loses some of its ragged authenticity. Even in a gritty, character-based drama like this one, with its careful attention to period detail – dig the microfiche, the vintage porn-stud moustaches, and those enormous cell phones – it becomes overly important for Vallee to sell a didactic message for today’s world, to convey the notion that Ron’s natural-health approach was ahead of its time and right by history. It was, of course, but it apparently took some Hollywood mythmaking to ram the point home. According to the facts of Ron’s case, the FDA granted him the tacit approval to distribute the unapproved drugs, rather than hound him every step of the way, as the soulless government bureaucrats in “Dallas Buyers Club” do.

Nevertheless, we believe every single thing McConaughey does in this picture; if there’s a grounding performance that solely makes up for a film’s transgressions, it’s this one.