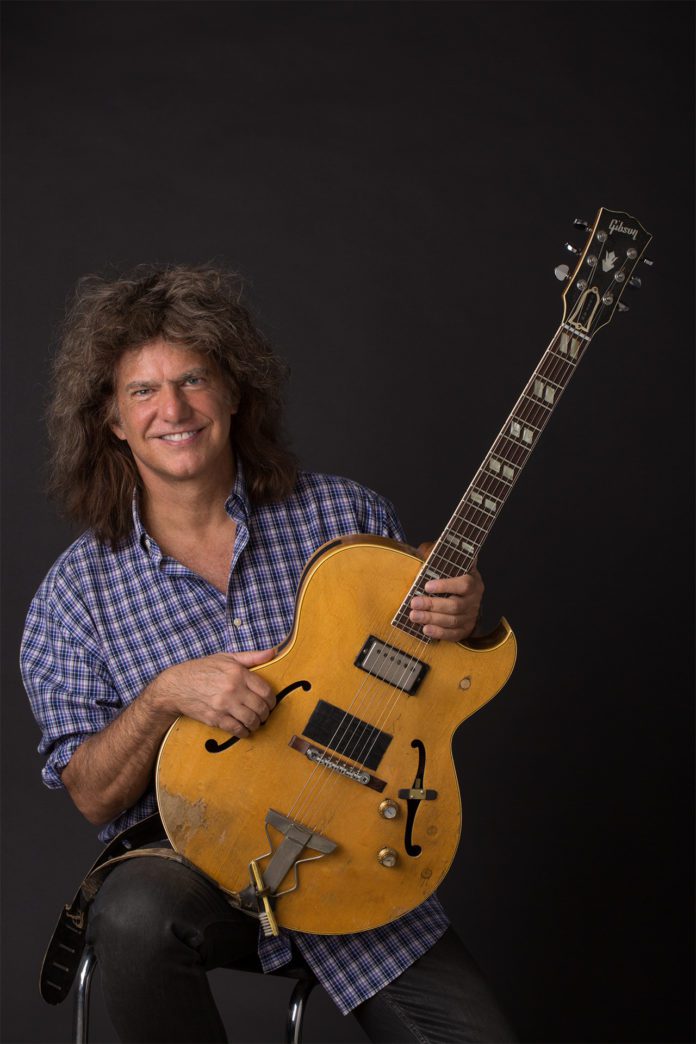 Like many of the best jazz musicians, Pat Metheny takes this genre distinction with a grain of salt. As the legendary guitarist tells Boca magazine in this conversation ahead of his performance Friday at the Adrienne Arsht Center, he doesn’t enter a project with an agenda for where it fits in the record shop or the Billboard chart. Which might explain why he’s the only artist to win Grammy awards in 10 separate categories—from his formative dominance in jazz fusion to Best New Age Album, Best Rock Instrumental Performance and Best Instrumental Composition.

Skirting around contemporary jazz, blues, rock and classical idioms, Metheny’s intricate playing on the acoustic guitar is so deft and rich it sounds like the work of two or three players in itself. This sonic palette will be expanded further on his current tour, Pat Metheny Side-Eye, which finds the composer developing new work alongside a stable of young rotating musicians. For his Arsht Center performance, he’ll be joined by keyboardist James Francies and drummer Joe Dyson, whose varied skills Metheny discusses below.

You’ve been composing professionally for nearly 50 years, but when you encounter young musicians like James Francies and Joe Dyson, do you feel you are still learning new things musically—picking up new ideas?

It is a special band with a different kind of a sound, but at the same time, my whole thing over the years has always followed a similar path. I always want to take people somewhere, and maybe through listening to this music, get them to think about things they might have not thought about before and maybe to notice things along the way that they had not really thought about. That mission starts with the musicians that I ask to join me along the way, but it goes for the audience too.

The goal for me as a bandleader who also writes 90 percent of the notes that get played on a given night is always the same: I want to hire the right cast of characters for what I am interested in at a particular time, but I always hope to have a band where every person on the bandstand can be the favorite person onstage for someone in the audience. But the most important for me is that whoever is there is someone who can not only hang, but also contribute in an effective way. And if that is happening, it is certain that I will be learning stuff from whoever that person is, especially over the course of a whole bunch of gigs. But coming up with a platform for that to happen year after year with a wide range of talented musicians with wildly different styles and abilities is a never-ending challenge that often falls into the realm of what I can offer them in the music that I compose for them.

Why did you choose to step away from performing your work on the majority of your 2021 release, Road to the Sun?

Honestly, the playing/performing part of things is not really at the top of my list of things—it is always more about the conceptual aspect of everything which tends to be defined by the notes on the page and the setting itself. Whether I play a lot, a little, or not at all has very little to do with how I relate to a project or an idea that I hope to get from the initial inspiration to some kind of final destination.

Critics praised your 2020 album From This Place, released on perhaps the most fraught year in our lifetimes, for its references to themes like the environment and American politics. Can you speak about the challenge, or thrill, of addressing such topics without the crutch of words?

One of the beauties of being an improvising musician is the relationship that emerges to time itself. We have to be very close to things on a listening level as they occur, and able to respond in milliseconds to what the world is sending our way. There is a fundamental political nature to that. You must be in tune with a whole bunch of sometimes disturbing arriving information and be able to report on what is going on in a way that is quite abstract in one sense—wordless, as you noted—but also, you must be absolutely responsive to that sometimes inscrutable input, even if it comes from a culture that is often openly hostile to creativity.

So many of your songs and albums stray from what might traditionally be called jazz, in much the same way certain releases from Miles Davis, Alice Coltrane, Keith Jarrett etc. delved beyond the genre that hatched them. I certainly hear the blues in the recent “Timeline,” for instance. I wonder if you consider genre at all when you write and compose, and if you think these musical distinctions still matter to listeners?

I really just try to honestly represent in sound the things I love about music.

I am not a huge fan of the whole idea of “genre” or styles of music to start with. To me, music is one big universal thing. The musicians who I have admired the most are the ones who have a deep reservoir of knowledge and insight not just about music but about life in general, and are able to illuminate the things that they love in sound. When it is a musician who can do that on the spot, as an improviser, that is usually my favorite kind of player.

I feel like I am a musician in this broad sense first. And all the subsets of the way music often gets talked about in terms of the words people use to describe music is basically just a cultural/political discussion that I have found I am really not that interested in, in the same way I am interested in the spirit and sound of music itself.

As far as sound goes, I always try to let the music at hand decide what direction I go in terms of orchestration. I am pretty happy to play in a really dense way, or a really sparse way, or really loud or really soft or all over the dynamic range, really inside the chords or outside the chords… it kind of doesn’t matter too much for me—it is whatever seems to sound best for what is happening at that particular moment.

The first time I saw you was on the Orchestrion tour. Can you say a few words about the positive impact technology can have on composition? Are enough musicians taking advantage of what’s out there?

Each era has unique musical opportunities that often juxtapose in an interesting way with what the culture demands at the time. Over my life as a musician, there has been a revolution in terms of what music technology can be. This has to be the best possible time in history to be a musician in terms of tools. That said, a good idea is a good idea—and, it must be said, the inverse is also true—and that happens in the timeless and rather unforgiving reality that there once was a musician like Bach (for example) who with much less “tech” wrote the greatest music of all time.

Whether music shows up in this guise or that guise, and whether it is super modern technology or a kazoo is pretty much beside the point—if you have a really great idea, it will work hi-tech and super lo-tech. To me, I am pretty happy playing an acoustic guitar just by itself or inventing entirely new ways of presenting music using the revolutionary technical opportunities of the time—but good notes are always the priority.

What are your favorite artists these days to listen to in your leisure time?

I like most music and always try to appreciate the efforts that it takes to make any kind of music do what it does. However, I almost always think we should all be doing better.