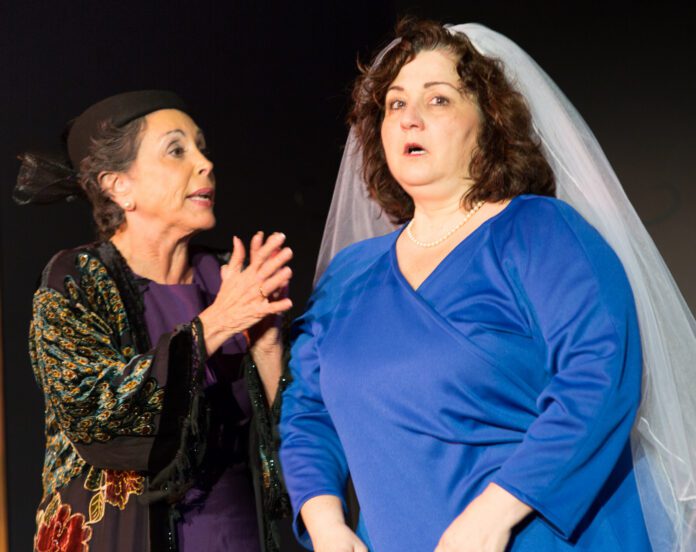 Two years ago, the West Boca Theatre Company at the Levis JCC produced a play that is as challenging to sit through as it is to stage, but in the most edifying way. It was called “Women’s Minyan,” Naomi Ragen’s drama about an ultra-orthodox woman in Jerusalem who, after suffering years of abuse by her husband, speaks publicly about her situation only to find herself shunned from her community and forcibly removed from her children.

The play, with its 10-female cast, proved such a success that the small company produced it again a year later. Now, that play’s director, Shari Upbin, and a pair of its cast members are returning for another play that is as much about feminism as it is Jewish mores. “From Door to Door,” which opens this weekend at the Levis JCC’s Beifield Auditorium (21050 95th Ave. South, Boca Raton), is written by James Sherman, whose comedy “Beau Jest” is one of the most-produced works at regional theaters this century. “From Door to Door” charts the relationships between three generations of women in a Jewish-American family, shifting through time in an instant.

Expect the mood to be a lighter than “Women’s Minyan,” but, as Upbin explains in an interview with Boca Raton, this production presented its own unique challenges, including a first for this veteran director.

With “Women’s Minyan” and now “From Door to Door,” is there a niche that you feel this company is developing in this theater community?

Yes. The plays highlight themes that are particular to Jewish women. “Minyan” was about a specific family in Israel that suffered abuse, which was a hidden subject. This one is a poignant comedy, but the subject is completely close to my heart as a mother who just lost my own mother. The theme is about the interrelationships of mothers and daughters, once again with a Jewish theme — but you don’t have to be Jewish to appreciate or understand what is going on. They’re universal themes of women.

For people who are going into this playing expecting another “Beau Jest” … I like that show for what it is, but I gather that this play has more substance.

Well, let’s talk about the heart of this play, which has made it a little more challenging to direct. It is done in flashback, where the style is usually done in movies. And because there’s one set, which is the way it’s written, and one set of costumes with little pieces here and there, and one prop that was necessary for the piece, my job and the actors’ job was to make the audience understand exactly where we were in time just by the nature of the words that Sherman wrote — and the body posture of the women and some of my sound cues.

Exactly. We had to go back to our roots. A woman is sewing a button on a sweater, and there is no thread, no box, no needle, and no button.

So it’s in the vein of Thornton Wilder, of Brecht … have you directed anything with these stylistic challenges before?

No. I’ve directed many plays, mostly musicals, and this play was presented to me by the producer of the West Boca Theatre Company, Myrna Loman. The play starts in 1999, and it flashes back to when the main character, Mary, is a little girl and growing up and becoming pregnant, and then it goes back to 1999 three times, which I found curious, but that’s how he wrote the play. We had to remember exactly where we left off, every movement: Your body needs to be here, your arm was over there … it’s been a very challenging rehearsal period.

What are the issues that the three characters are dealing with?

There is Mary, who was part of the greatest generation. She’s mourning the loss of her mother, and her flashbacks are the values her mother put on her, which were that girls shouldn’t necessarily go to college or be great artists. Girls should marry. Her daughter, reading Betty Friedan and Erica Jong and Gloria Steinam, says no, you have a career, you go to college, what’s the rush to get married? It’s about wanting our daughters to succeed. And the grandmother came from the old country — the “other side,” as she calls it — and she’s living in the Depression era with Holocaust issues.

What was it about these three actresses that made you want to cast them?

The woman who is playing the grandmother played the mean woman in “Women’s Minyan” — this tall, stately actress, Renee Rogoff. I was attracted to her experience as an actress and the depth of her knowing how to approach a role, and the way she looks — she doesn’t look like the old bubby. The younger one, Clelia Patrizio, was also in “Minyan,” where she played an abused stutterer. I just knew she also had the depth to play a young modern daughter. Mary, who is the mother, is played by one of South Florida’s most dependable actresses, the talented Phyllis Spear. It’s been great for me. There are no divas in the cast.

How do you feel when you see the very first performance of a show in front of an audience?

It’s a wonderful feeling of accomplishment, but I’m never really 100 percent satisfied. In “Women’s Minyan” we were lucky we got a chance to do it [two years in a row]. But I’m always a pragmatist. Like any CEO would say, I just hire the best people and let them do their work.