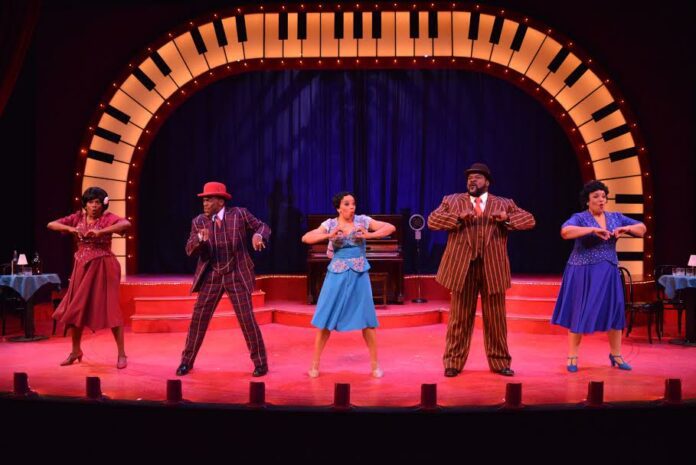 Fats Waller tried to be good, he really did. But for this effortlessly funny, corpulent jazz pianist, angelic behavior just wasn’t in his nature. Instead, he was the music world’s rollicking id during his short-lived tenure as the king of the Jazz Age slide piano. Ironic, then, that songs like “Ain’t Misbehavin’” and “Keeping Out of Mischief” become some of his most well-known compositions: Misbehavior and mischief coursed through his blood, not to mention the ivories he so energetically tinkled.

The Wick Theatre’s irrepressible new production of “Ain’t Misbehavin,”—an eclectic musical tribute to Waller and his Harlem Renaissance compatriots—rightfully captures the offbeat humor, sexual pulse, and naughty camaraderie inherent in Waller’s compositions. Staged like a vintage Harlem cabaret and performed by a cohesive quintet of period-perfect actor-singers, the Wick’s “Ain’t Misbehavin’” is directed, by Ron Hutchins, with an abundance of choreographic inspiration and salacious wit. This production may contain more outstretched, wandering tongues on any stage this side of a KISS concert, and when one actor fires a gunshot to break up a rowdy confrontation toward the end of Act One, it seems fully appropriate to the anarchic atmosphere.

Part of the production’s winning formula is the fact that it’s the first Wick show to feature a live band. At first, we can only see a drummer and upright bassist, visible through a translucent purple curtain. But after a few songs, the curtain parts to reveal a three-piece horn section that some might find overly loud but whose sonic gregariousness hit all the right notes for me. The immediacy of hearing these sounds from a live band contributes greatly to the production’s infectious ambience.

The cast couldn’t have been chosen better, working like a true vocal ensemble. Nobody tries to steamroll over anybody else, though if there’s one standout, it has to be Philip Boykin, not just because he most resembles Waller; he simply brings the most unfettered exuberance to the production, acting—and reacting—with his entire jocular body, bringing to the stage the elasticity of silent-film comedy. His performance of “Your Feet’s Too Big” is a bravura comic highlight.

Elsewhere, Debra Walton, playing up (or should we say down?) her status as the show’s most diminutive singer, is as effervescent and hopeful as a glass of New Year’s Champagne; Shirley Tripp shows her mastery at playing a faux-floozy or a nervous ingénue over the course of a number of songs; Reggie Whitehead, as the straight man to Boykin’s jester, looks about as classy as anybody can in suspenders; and Joy Lynn Jacobs gets a lot of well-earned laughs for cartoonish high notes, though she proves she be seriously operatic when the moment arrives.

Together, their joy at creating music together onstage is palpable. This hilariously lusty time capsule is easily the Wick’s second-best production of its inaugural season, behind its unstoppable “42nd Street.”